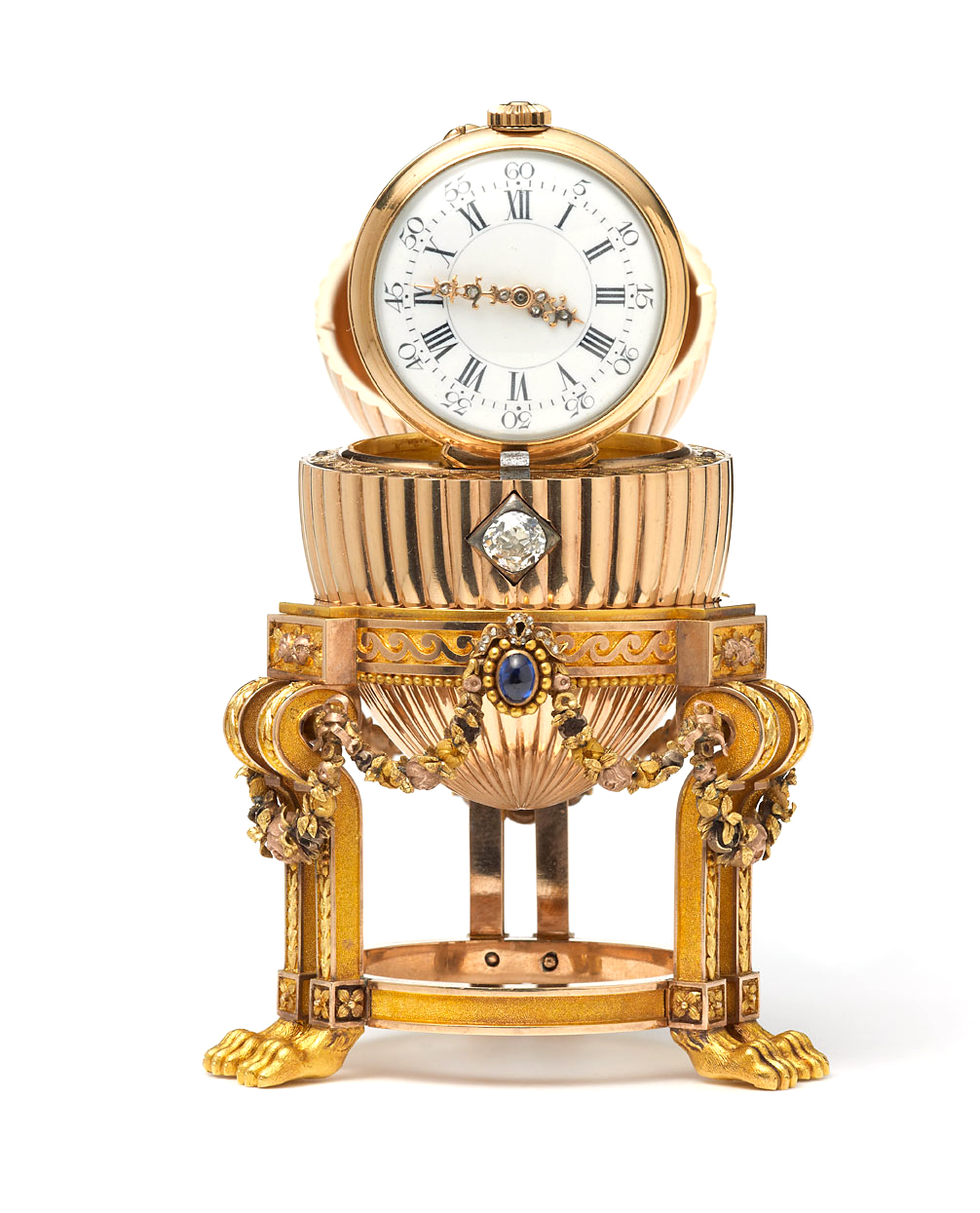 Given by Alexander III Emperor and Autocrat of all the Russias to Empress Marie Feodorovna for Easter 1887.

It contains a surprise of a lady’s watch by Vacheron Constantin, with a white enamel dial and openwork diamond set gold hands. The watch has been taken from its case to be mounted in the Egg and is hinged, allowing it to stand upright.

‘… the Imperial Easter Eggs, surely one of the most extraordinary series of gifts ever conceived’
A. Kenneth Snowman, The Art Of Carl Fabergé, 1953 ‘In the Imperial Easter Eggs you see Fabergé at his very best …. nothing which has so far come from a goldsmith’s workshop surpasses these productions in craftsmanship and ingenuity’
Henry Bainbridge; Carl Fabergé’s London agent.

On the 8th February 1889 the Third Imperial Easter Egg was included in a Russian Imperial Cabinet list of the Eggs supplied by Fabergé to Emperor Alexander III as,

The Cabinet’s account books contain an earlier note made on the 18th May 1887 of a payment of 2160 roubles to Fabergé for the same ‘egg with clock’.

In March 1902 the Third Imperial Egg was shown in the charity exhibition held at the Von Dervis exhibition on the English Embankment in St. Petersburg

The Provisional Russian government recorded the Egg among the confiscated Imperial treasures transferred from the Empress Maria’s Anichkov Palace to the Moscow Kremlin Armoury in September 1917. The following record of its transfer from the Kremlin’s archive was provided by Tatiana Muntian and is noted here for first time:

Art. 1548. “A lady’s gold watch, opened and set into a gold egg with one diamond. The latter on a gold tripod pedestal with three sapphires.” Number 1644 “

Between 17th February and 24th March 1922 responsibility for the Eggs was transferred from the Kremlin Armoury to the special plenipotentiary of the Council of People’s Commissars, Ivan Gavrilovich Chinariov.

Article 68/1548 of the transfer is described as ‘One gold egg with watch, diamond push-piece and pedestal with 3 sapphires and rose cut diamonds.’

In 2011 Fabergé researchers Vincent and Anna Palmade discovered the Egg survived beyond 1922. It had made its way to the West and was sold without its provenance for $2,450 (£875) by Parke Bernet in New York, in their auction of the 7th March 1964. Parke Bernet’s catalogue entry for the Egg reads:

The Egg remained in the USA and was recently bought for $14,000. The purchasers were unaware of its provenance and the price paid was calculated only on its intrinsic value.

“We doubt everything but this story is so wonderful you couldn’t really make it up – it is beyond fiction and in the legends of antique dealing, there is nothing quite like this.”