The Imperial Constellation Egg by Fabergé 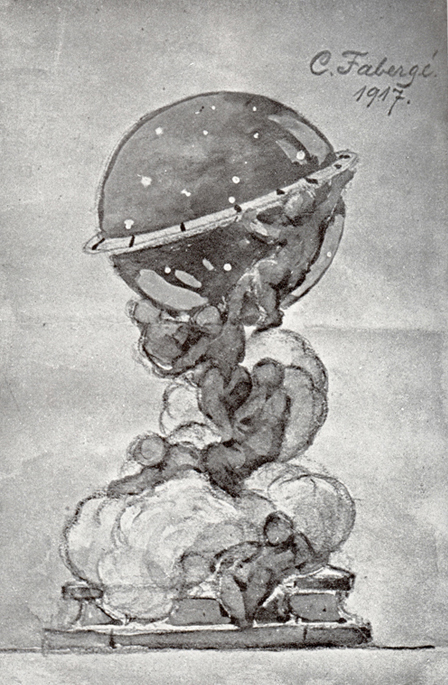 The last Imperial Easter Egg commissioned by Tsar Nicholas II for his wife Alexandra Feodorovna was the Constellation Egg of 1917. It is one of the most tantalising of Fabergé’s Imperial eggs, not least because it was never completed and its component parts were only recently identified in Moscow.

The archival material relating to the egg, including a preparatory design (above right) first published by Kenneth Snowman, has been exhaustively researched by Tatiana Muntian of the Kremlin Museum and Marianna Chistyakova of the Fersman Mineralogical Museum. This brief article is a footnote to their work and relates solely to the discovery of the inspiration for the egg.

According to Franz Birbaum, Fabergé’workshop manager, the egg was conceived as a clock in the form of a celestial globe of dark blue glass encircled by a rotating dial, held above billowing rock crystal clouds surmounted by silver cherubs; the whole supported on a nephrite pedestal. The globe was to be decorated with a diamond studded engraving of the constellations under which Tsarevitch Alexei was born. Work began on the egg but revolution and war overtook its production and it was never completed. In 2001 its unfinished clouds and globe were uncovered in the collection of the Fersman Museum in Moscow, where Fabergé’s son Agathon left them in 1925.

The majority of Fabergé’s Imperial Easter Eggs derive their forms from works of art dating from the sixteenth to eighteenth centuries. Most of the prototypes for the eggs have been identified. Some are direct pastiches of earlier works: the first Imperial egg, the Hen egg is indistinguishable from a series of eighteenth century enamelled eggs from Southern Germany, the Renaissance egg is a direct copy of a casket by Le Roy now in the Green Vaults. Many of the other eggs, such as the Kremlin egg, are not exact copies but reinterpretations of earlier works.

The design of the Constellation egg is evidently derived from an eighteenth century French bronze clock made for the Duchesse de Mazarin by the Parisian clock maker Jean-Baptiste Lepaute and modelled by Augustin Pajou. Pajou (1730-1809) was a Parisian Neoclassical sculptor patronised by King Louis XV.

His design illustrated the popular eighteenth century conceit of love triumphing over time. Several variants of the clock were produced including that by Etienne Martincourt in The Wallace Collection (illustrated above left). All incorporated celestial globes supported on clouds flanked by a figure of Father Time ensnared in chains of roses by amorini. The Constellation Egg’s putti, clouds and celestial globe are taken from Pajou’s design.

Instead of copying the design Fabergé reinterpreted it. Rather than bronze he chose rock crystal, nephrite and silver . He distilled the idea of Love triumphing over Time into cherubs scaling the clock and ingeniously used the globe to celebrate the birth of the recipient’s beloved son.

Tatiana Muntian rightly concluded that because the egg is unfinished it has become a symbol of the fall of the Russian monarchy and collapse of the House of Fabergé. Now that the inspiration for the egg has been established its original meaning is clear.

The Egg was a defiant declaration, in the face of revolution, of love’s indifference to time and circumstance. 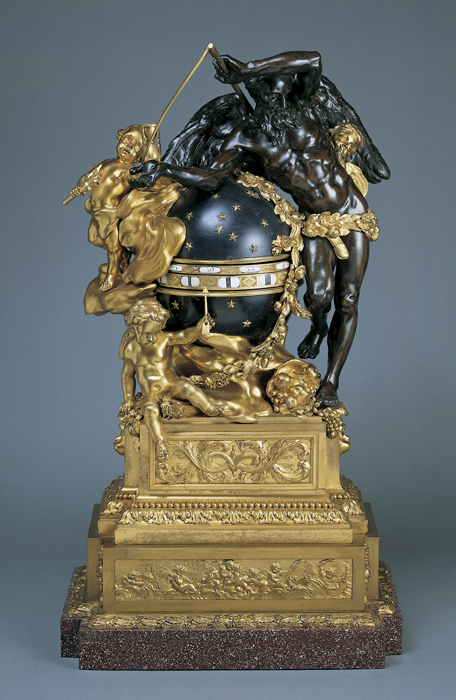 Image of the clock after Pajou
© By kind permission of the Trustees of the Wallace Collection, London.