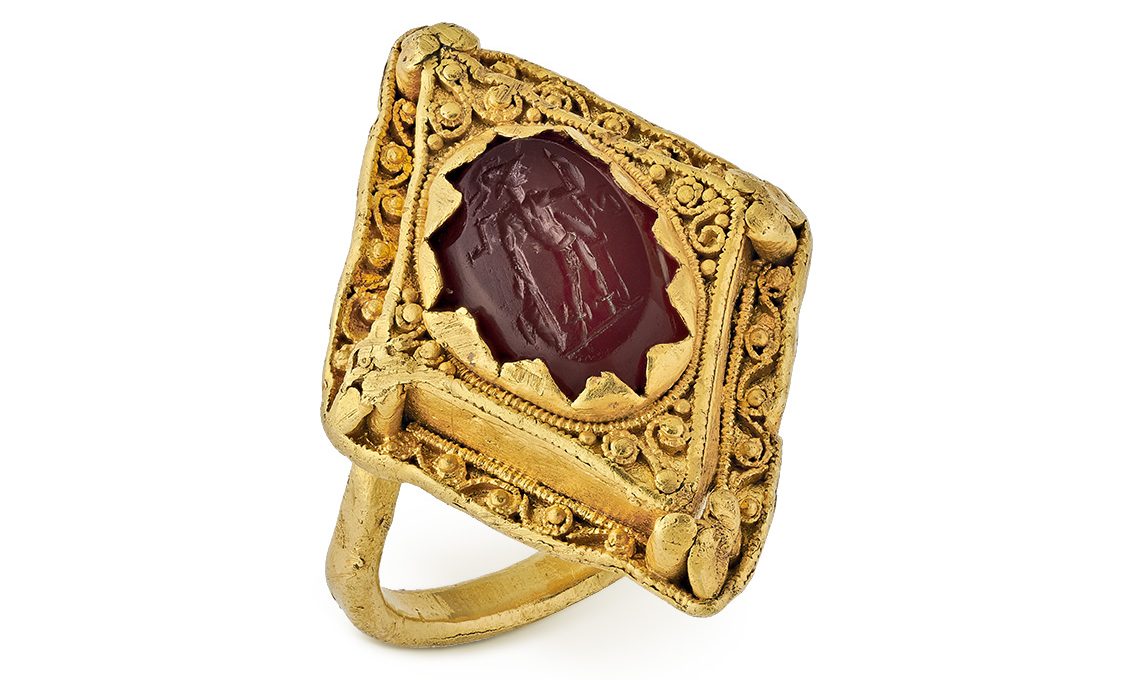 an Anglo-Saxon ring, mounted entirely in yellow gold, the tiered and lozenge shaped bezel holding a third century oval Roman carnelian intaglio depicting Mars and flanked with the initials ‘M’ & ‘L’, the intaglio held within bold serrated settings, the bezel decorated with scrolling filigree work and at each corner with trefoil motifs, the gold band attached to the underside with extended overlapping scrolls.

The ring was discovered by a metal detectorist under a rosebush in a residential garden adjacent to Priory Park, Hitchin, in May 1977. Its discovery was reported to the local coroner who declared it not to be treasure trove and returned the ring to its finder. Accompanying correspondence between the finder and the British Museum from November and December 1977 discusses the Museum’s purchase of the ring for £4,500. The finder decided against selling the ring to the Museum and later entered it for sale at Sotheby’s, London, 9th July 1987, lot 234.

The closest comparable to the Hitchin ring is the primary finger ring of the West Yorkshire Hoard, discovered in Leeds, September 2008 and now held by the Leeds Museums and Galleries (Treasure case 2008-T553/ Portable antiquities scheme reference SWYOR-F86A02). The rings share tiered lozenge forms, filigree motifs and scrolled terminals to the bands. The Yorkshire hoard ring is of a larger size but mounted with a smaller uncut cabochon garnet.

The Hitchin ring is contemporaneous with the later stages of the Carolingian Renaissance, which paid homage to the artistic, cultural and political achievements of the Roman Empire. The admiration of Roman culture extended to Britain, where among other manifestations, Alfred the Great issued coins following Roman models. Conceived as a vehicle for displaying the Roman intaglio, the ring is a rare example, in goldwork, of the veneration of Roman culture in the ninth and tenth centuries.