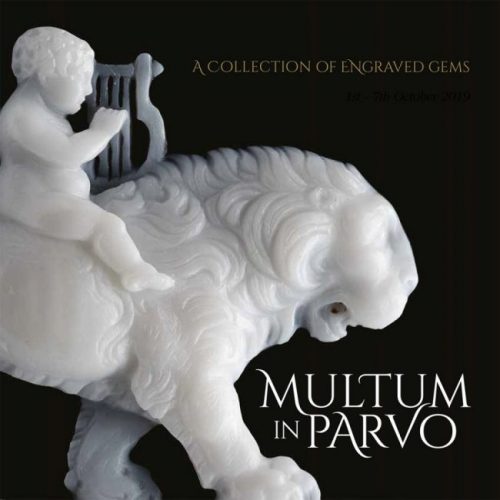 Multum in Parvo: A Collection of Engraved Gems

Proceeds from catalogue sales will be donated to Heads Together.

Entitled ‘Multum in Parvo’ (a Latin motto which translates as 'much in little'), this catalogue was written to accompany the exhibition hosted at our St James's Street shop between 1st and 7th October 2019, which showcased a unique collection of engraved gems. All one hundred and five exhibits from the exhibition are illustrated in the catalogue, with extensive descriptions of each piece. An introductory essay which provides a brief history of gem engraving is also included, as well as biographies of all the gem engravers whose work featured in the exhibition.

The collection was assembled by Wartski over an eight year period and included works by the most notable gem engravers of the 18th and 19th centuries, such as Nathaniel Marchant, Edward Burch, Luigi Pichler, William and Charles Brown, Nicolo Morelli, Giuseppe Cerbara, Giuseppe Girometti, Angelo Amastini, Luigi Michelini, Luigi Isler, Tommasso Saulini and Benedetto Pistrucci. The collection also included several gems from the fabled collection of George Spencer, 4th Duke of Marlborough and a number of examples from Classical antiquity.