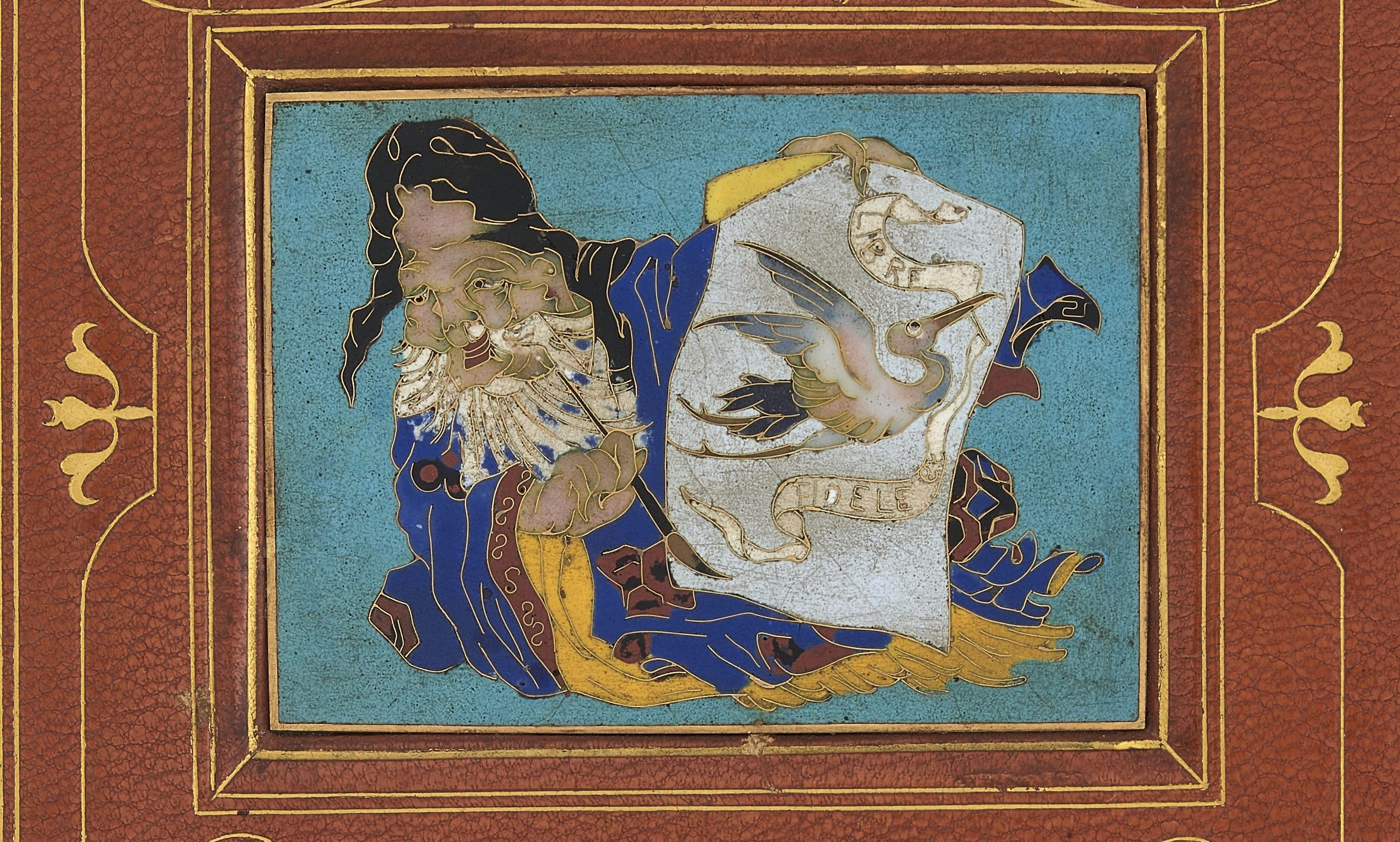 Wartski are delighted to announce that the lavishly bound author’s copy of ‘Les Emaux Cloisonnés Anciens et Modernes’ by Philippe Burty (1830-1890), first unveiled at TEFAF Maastricht, has been acquired by the Musée des Arts Décoratifs in Paris.

The enamelled plaque inlaid in the cover, commissioned by Burty, was identified by Katherine Purcell as a work by Alexis Falize. It features the Shinto deity Jurojin, God of Wisdom and Longevity, holding a scroll depicting Philippe Burty’s ex-libris.

The lavishly decorated binding by Rémy Petit is further applied with the author’s gilt monogram. Interspersed within the text are woodcut engravings after drawings by Félix Régamey inspired by Japanese woodblock prints. Four chromolithographs by his father Louis-Pierre-Guillaume Régamey follow the text, illustrating cloisonné enamelled jewellery by Alexis Falize.

The ten original paintings of the jewels depicted in the chromolithographs, also carried out by Régamey ‘père’, are incorporated into the binding. The collector and art critic Philippe Burty (1830-1890) coined the word ‘Japonisme’ in 1872 in a series of articles published in La Renaissance littéraire et artistique. In recognition of his tireless promotion of Japanese art and culture, the impassioned writer and discerning collector was presented with the distinguished Order of the Empire of the Rising Sun in February 1884, established in 1875 by Emperor Meiji of Japan.

The panel created Alexis Falize (1811-1898) and the gifted enameller Antoine Tard formed part of the jeweller’s display of cloisonné enamels exhibited in 1869 at the Musée des Arts Décoratifs (formerly known as the Union Centrale des Beaux-Arts appliqués à l’industrie). The oriental flavour of the motifs depicted derived from Japanese albums of woodblock prints by artists such as Hokusai owned by Falize.

A photographic record of the display reveals the central positioning of Burty’s plaque above another larger panel emblazoned with the words ‘Emaux Cloisonnés’.

The plaque, now inlaid in the volume it was destined for, is returning to the Musée des Arts Décoratifs 150 years since it was last seen there. Its acquisition by the museum was enabled by the generosity of the philanthropist Krystyna Campbell-Pretty.  The volume is now on display in the room devoted to Japonisme.