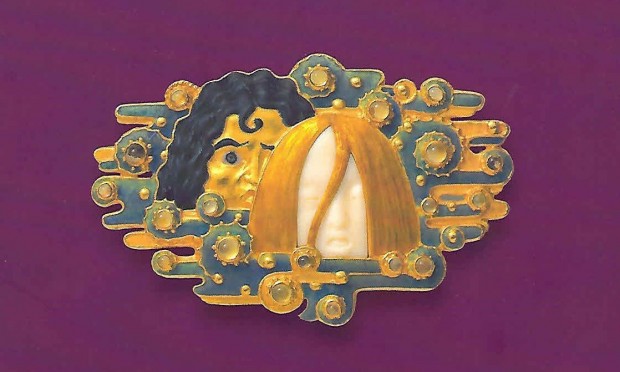 French Jewellery of the Nineteenth Century

Gold, enamelled and ivory brooch designed by the decorative artist Eugène Grasset for Vever, an identical brooch exhibited by the jeweller at the 1900 Exposition Universelle in Paris and preserved in the Musée d’Orsay.

The nineteenth century in France was one of the most creative periods for the design and manufacture of jewellery. A myriad of workshops some now famed, others forgotten mirrored the changing fashions of French society from the magnificence of the first Empire to the naturalism of Art Nouveau in their work. French Jewellery of the Nineteenth Century at Wartski was the first exhibition to concentrate on jewels of this period. It contained a number of Napoleonic pieces, including the ruby and diamond set laurel spray by the Court Jeweller Lemoine for the Empress Josephine, an acrostic bracelet given by Napoleon to his sister Elisa Bonaparte, Princesse Bacciochi and a dazzling diamond set rose brooch belonging to the Princesse Mathilde. Napoleon revived the fashion for cameos and jewels of archaeological inspiration became popular. Later pieces were inspired by Egyptian sources (exemplified by Baugrand’s brooch depicting Isis), as well as the Gothic and Renaissance seen in Boucheron’s Fortuna within an architectural canopy seated on a circular diamond wheel. The introduction of new manufacturing techniques and materials were also represented, including the increased use of cut steel in the 1820’s, the incorporation of aluminium in the 1850’s, and the widespread use of more modest materials such as ivory, tortoiseshell and horn inspired by Oriental works in the 1870’s. Falize’s cloisonné enamelled jewellery depicting motifs drawn from Hokusai’s prints, together with Gaillard’s representations of insects and botanical subjects demonstrate the overwhelming influence of Japanese art at the time. Its incorporation of elements drawn from nature heralded French Art Nouveau, many pieces of which dating from the late 1890’s by Gautrait, Fouquet, Vever and Lalique were included to complete the display.