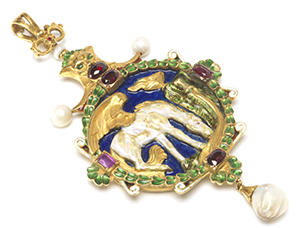 Objects on display encompassed a wide range of styles, including intricate historicist and Neo-Gothic designs from the mid-19th century, represented by jewellery by some of the of the finest jewellers of the time: Castellani, Giuliano, Robert Phillips and John Brogden, as well as a spectacular decanter by William Burges. The naturalistic Arts & Crafts movement was represented by C.R. Ashbee and the Guild of Handicraft, Henry Wilson and Phoebe Traquair, amongst others, while the structural modernity of silver from the 1920s and 1930s was represented by leaders of the field, Omar Ramsden and H. G. Murphy.

Highlights included unique jewellery designed by the artist Charles Ricketts for the couple Katharine Bradley and Edith Cooper, known collectively as the author, Michael Field, which holds a special place in the history of queer art in Britain.

The book of the same name, written by exhibition curator Helen Ritchie and sponsored by Wartski is available from the Fitzwilliam Museum.