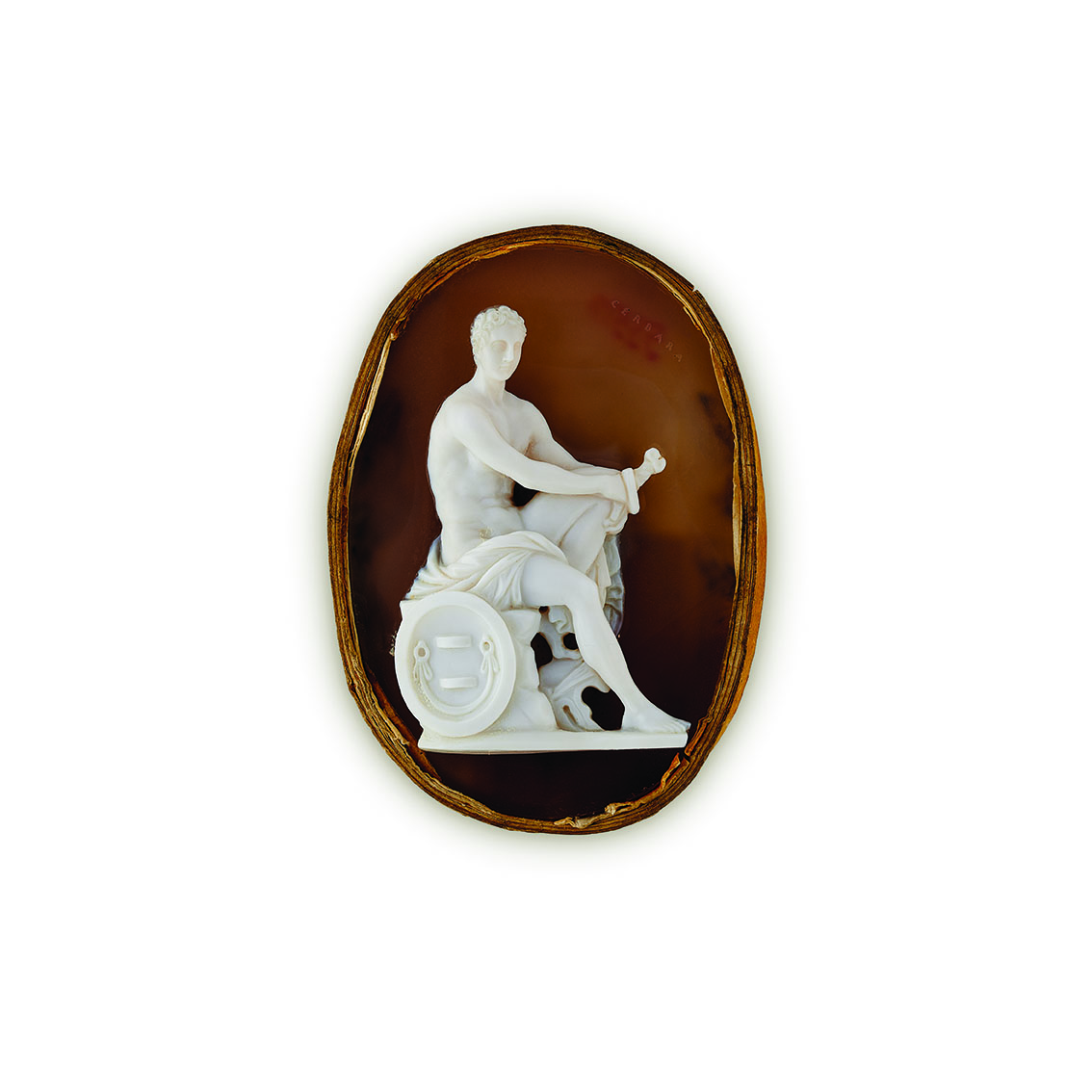 in a light caramel coloured sardonyx, showing the Roman god of war Mars, depicted as a beautiful young man seated with a circular shield by his side, a sword in his hand.

The composition is taken from an ancient Roman marble sculpture which was a copy of an earlier Greek work attributed to Skopas or Lysippus. The marble was originally discovered near the Palazzo Santa Croce in Rione Campitelli (as recorded by the engraver Pietro Santi Bartoli) and presumably sat in a temple dedicated to the god Mars. It was acquired by the Ludovisi family in 1622.

The sculpture became immensely famous during the 18th and 19th Centuries, as it was considered an exceptional work from Classical antiquity. The art historian and influential aesthete Johann Joachim Winckelmann (1717-1768) praised it very highly in his catalogue of the Ludovisi Collection, calling it “the most beautiful Mars from antiquity.”

Access to the sculpture was carefully controlled during the 17th Century, during which time very few cast copies were allowed to be taken. In 1726, the Princess of Piombino allowed a cast to be taken for the French Academy in Rome and from this reproduction further copies of the statue were taken. By the 19th Century, miniatures in terracotta and bronze were widely sold across Europe.

An etching of the Ludovisi Ares was created by Francesco Battista Piranesi, circa 1783, as well as Domenico de Rossi in Raccolta di Statue antiche e moderne, published in 1704.

As one of the greatest treasures in Rome, the Ludovisi Ares would have been the perfect subject for the Roman cameo carver Giuseppe Cerbara. He may have worked from an etching or one of the casts in the city.

Interestingly, Cerbara’s recreation does not include Cupid sitting at the foot of Mars (a later addition by Gian Lorenzo Berini when he restored the statue in the 17th Century), a decision made perhaps to retain the purity of the original sculpture.