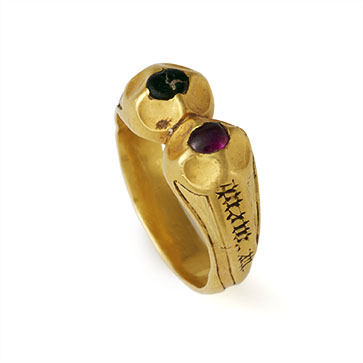 a jewelled yellow gold finger ring, its quatrefoil scalloped double bezel mounted with a cabochon ruby and emerald, the shoulders chased with spiralling ribbons forming recesses that are engraved in Norman French with the legend ‘ne meur’ to one side and ‘bon’ followed by a rebus of a heart to the other, which translates as ‘a good heart never dies’.

The ring was discovered by a metal detectorist on the 19th April 2015 in a field nearby to the village of Green Hammerton in North Yorkshire. It was declared treasure under the Treasure Act (1996), recorded as treasure number 2015T271 and on the Portable Antiquities scheme as SWYOR-61ADFC.

Following an attempt by a local museum to acquire the ring it was disclaimed and returned to the finder, from whom Wartski purchased it.

The ring’s sale to Wartski attracted national media attention; it was covered in newspapers and by the BBC

Non-destructive X-ray fluorescence analysis of the metal of the ring carried out by the British Museum’s Scientific Research section indicated a surface composition of approximately 78-80% gold, 11-13 % silver, with the remaining metal being copper. The red stone was identified by Raman spectroscopy as red corundum (ruby), and the green stone as green beryl (emerald).