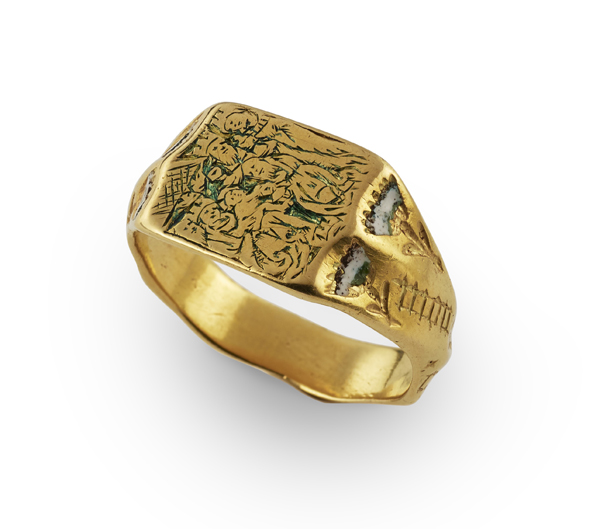 an exceptional yellow gold iconographical ring, the single rectangular bezel depicting the adoration of the Magi enamelled vivid green; showing Balthasar, the youngest magus, beardless bearing frankincense to the far right, to his right stands Caspar bearing gold, in the centre on his knees is Melchior bearing myrrh, Mary holding the infant Jesus is seated and Joseph is engraved over her shoulder beneath a cross-hatched stable’s gable, the wreathed band engraved to the top with four flowers in which remain a significant proportion of the original black, white and green opaque enamel, the wreaths further engraved over the two sides in black letter script with the legend ‘FOI EN MON CUER’ (Faith in my heart) between floral sprigs and embellishments. 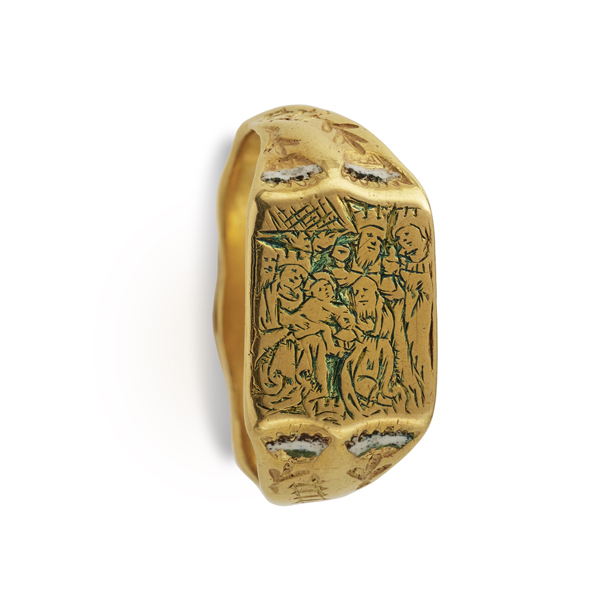 A metal detectorist discovered the ring in the mid-1990’s in Charnwood, Leicestershire. In 2016 it was submitted to the British Museum for consideration as treasure but was deemed due to its discovery date to fall outside the stipulations of the act. It was recorded on the Portable Antiquities Scheme under ID LEIC-512D1F and returned to the descendants of the finder.

This is one of the most important iconographical rings to be found. It is rare example of the type depicting a scene rather than individual saints. Few comparable scenes are known, examples include a 16th century ring from the Waterton Collection held in the Victoria & Albert museum, no. 693-1871 and a 15th century ring in the British Museum, no.2004, 0202.1. Neither of these rings has an inscription and the black letter legend to the exterior of the Charnwood ring is noteworthy. It has been suggested that iconographical rings served amatory as well as devotional functions. Accordingly the legend may be read as a statement of fidelity between lovers as well as faith. The condition of the ring is remarkably good, it is complete and unusually much of its polychrome enamel remains.