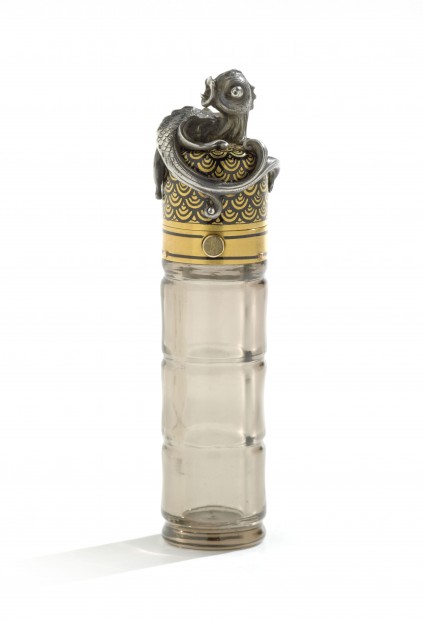 A scent flacon carved from smoky quartz as a bamboo stem by Fannière Frères, the gold mount champlevé enamelled in the form of stylised Japanese waves surmounted by a fantastic fish chased from silver. The inside of the lid engraved in capitals ‘Fannière Fres Rue de Vaugirard 53 Paris’ as is the lid satin of the accompanying fitted original leather case.

Nephews and pupils of the goldsmith Jacques-Henri Fauconnier (1779-1839), François-Auguste (1818-1900) and his brother Joseph-Louis Fannière (1820-1897) counted amongst the most highly respected Parisian goldsmiths and jewellers of the nineteenth century. They were almost unique in designing and making their own pieces. Apart from large-scale goldsmith’s work including centrepieces and racing prizes, they also created jewellery and smaller-scale objects, initially supplying distinguished firms such as Froment-Meurice and Wièse before participating in Expositions Universelles under their own name.  Their first gold medal was awarded at the 1862 International Exhibition in    London, followed by another in Paris in 1867, and Grand Prix at the 1878 and 1889 Expositions Universelles.

This scent flacon clearly demonstrates that even a firm producing pieces principally in the Renaissance taste was not impervious to current trends, and felt compelled to explore decorative elements and forms drawn from Japanese works of art.