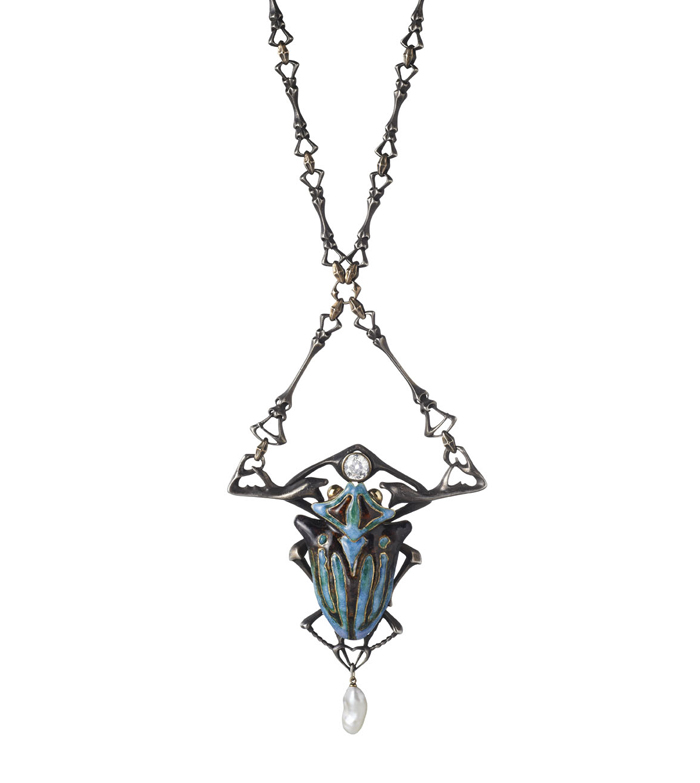 in the form of a fantastic stag beetle, its legs and pincers of blackened silver, the eyes of polished gold, its shell decorated with opaque green, blue and black enamel,the links of the chain in the form of stylized insect legs attached to the pincers clasping a gold-mounted brilliant-cut diamond. The hind legs form a heart shaped ornament from which a baroque pearl is suspended.

An identical example formed part of the ‘Imperishable Beauty’ exhibition held at the Boston Museum of Fine Arts, 23rd July to November 9th 2008 (no. 48) and published in the accompanying book p. 106, the only difference being the suspended pearl which was black in colour. A jewel of identical composition, set with peridots instead of a diamond and pearl, forms part of the collection of the Hessisches Landesmuseum, Darmstadt.

The patination of silver in Lucien Gaillard’s work is a technique his father Ernest had experimented with during the 1870’s, inspired by Japanese metalwork.The pieces he exhibited at the 1878 Exposition Universelle earned him a silver medal and by 1889 he had been awarded the Légion d’Honneur. Lucien (1861-1933) , trained by his father, continued researching the processes of Japanese gilding and alloys. By 1900 he employed 80 craftsmen and was awarded a Grand Prix for the works he exhibited at the 1900 Exposition Universelle. He subsequently brought craftsmen skilled in metalwork to his workshops from Japan. It was there they worked to Gaillard’s exacting specifications, enabling him to produce works of coloured metals and decorated with rich patinas.

Gaillard was inspired by René Lalique’s exploration of all aspects of the natural world, and like him interpreted the ethereal beauty of floral and foliate motif sin his exquisitely carved horn and ivory combs. He also echoed Lalique’s depiction of the less attractive aspects of flora and fauna, most specifically in the insect world. His predilection for scarabs and stag beetles were demonstrated in his jewellery and in this example in particular. Such insects were also represented in objects including magnifying glasses, in which their large horns encircled the glass.