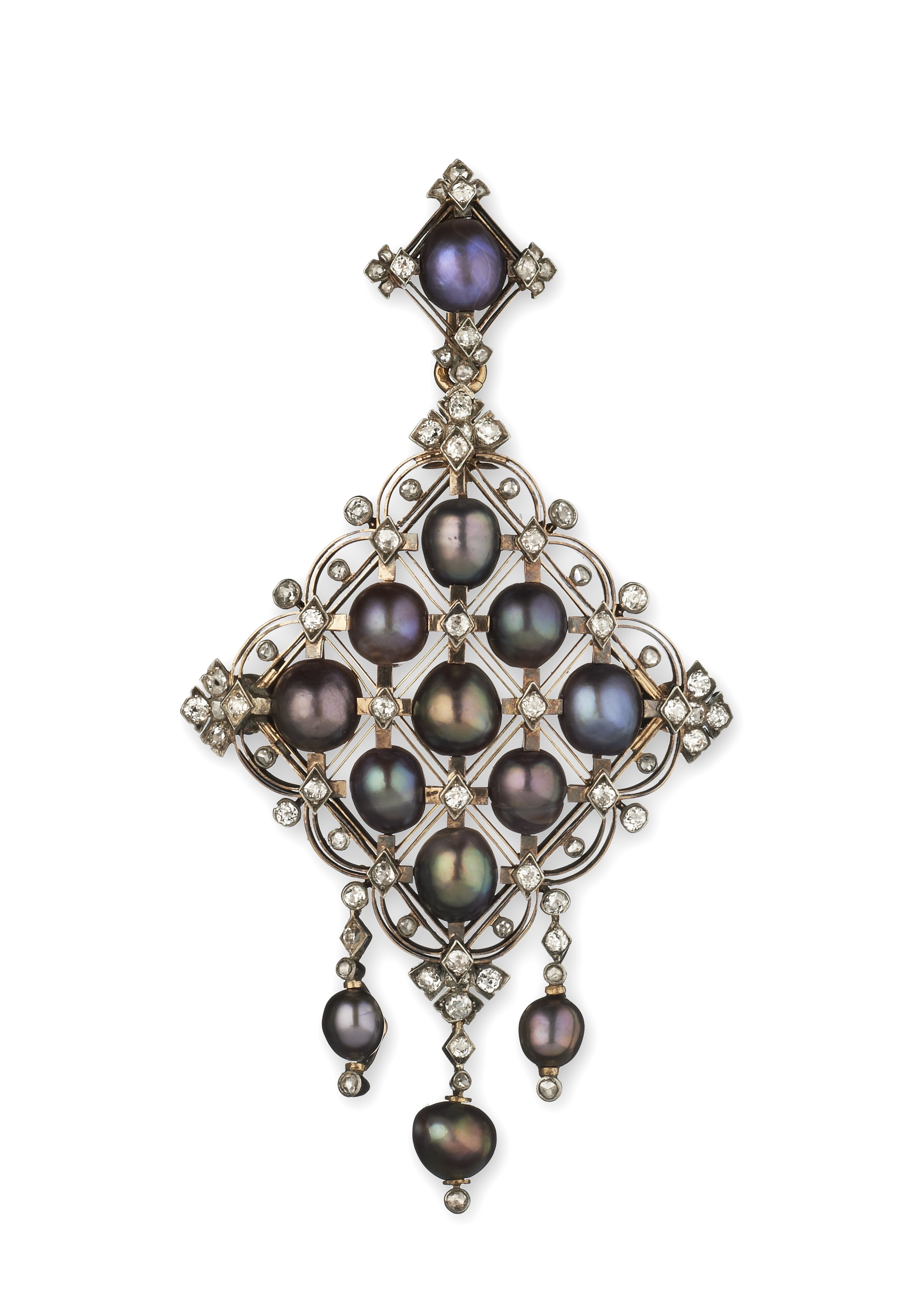 of lozenge form, the openwork frame decorated with black champlevé enamel with nine grey pearls set within, the intersections set with circular diamonds in lozenge shaped mounts, the border diamond set, the jewel hung from a pearl and diamond set loop, the whole suspending three pearls.

This indicates that it was made after the partnership between Lucien Falize and Germain Bapst was formed in 1880, but before the move to their new premises in the rue d’Antin in 1882. A sliding compartment in the base of the box reveals a pin fitting, allowing the jewel to be worn as a brooch. 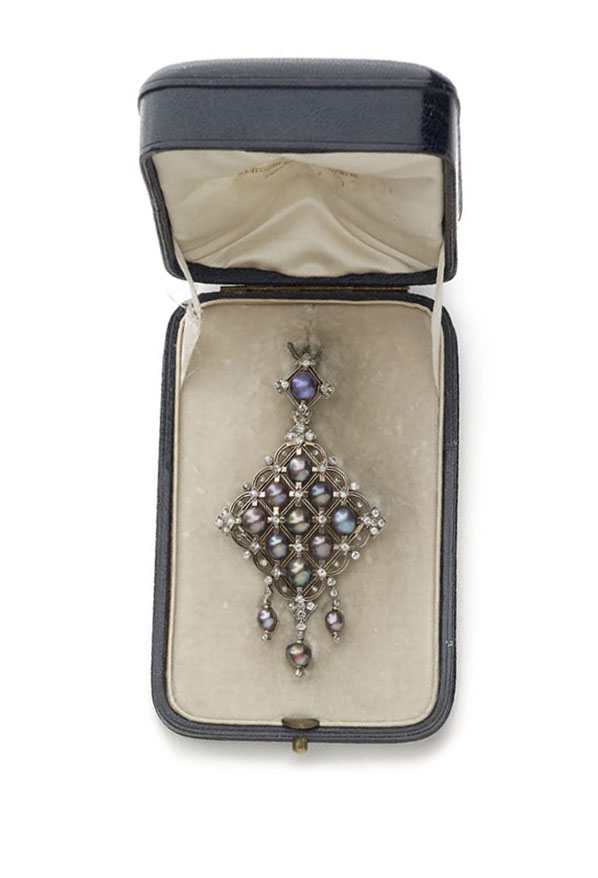 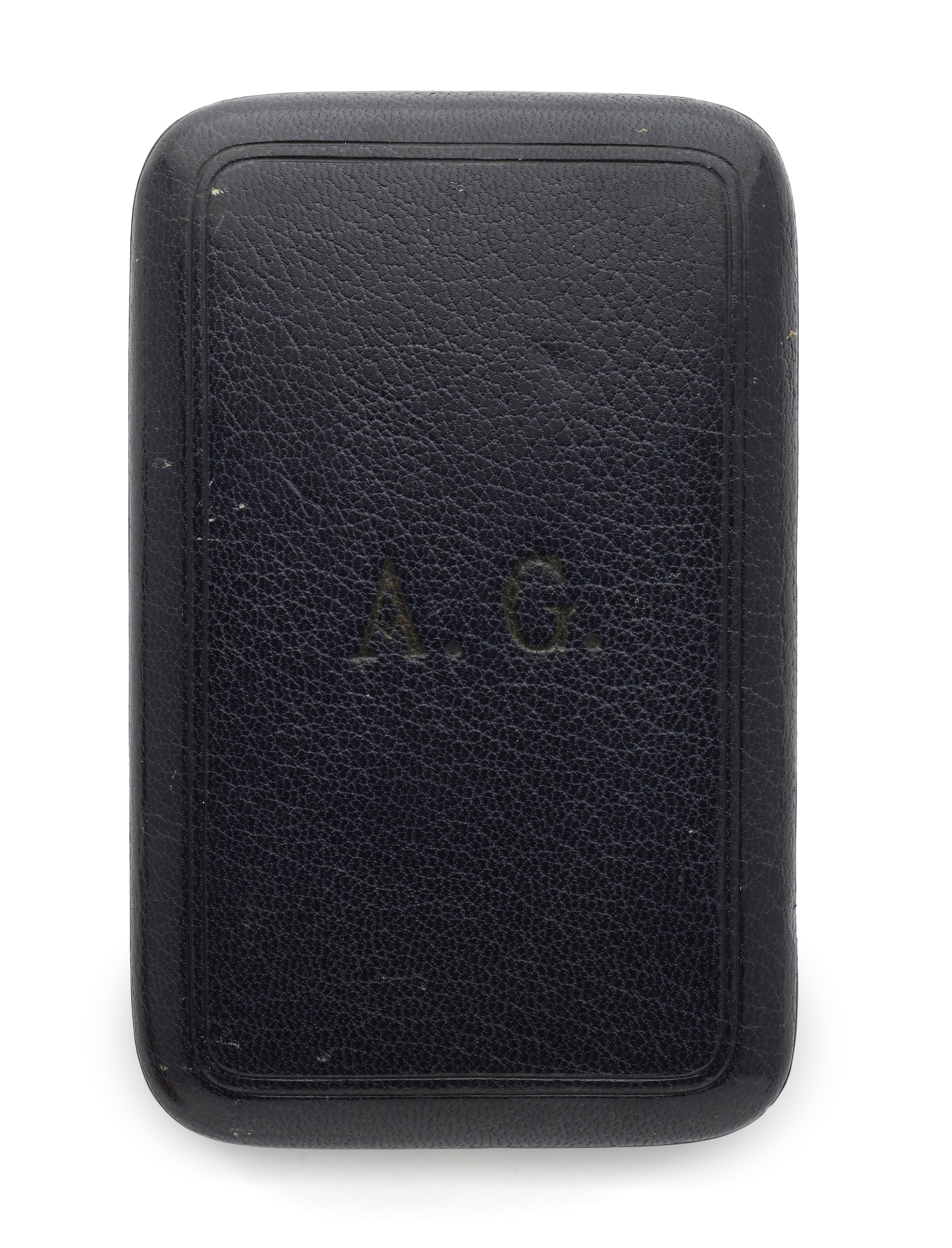 The lid of the case bears the initials A.G. for Anna Gonse (1856-1929), wife of the Director of La Gazette des Beaux Arts Louis Gonse (1846-1921). The reverse of the box bears an original label with the name ‘Madame Gonse’ penned in ink, revealing the identity of the owner.

Lucien Falize contributed several articles to the distinguished art publication La Gazette des Beaux-Arts and shared Louis Gonse’s passion for Japanese art. They may have first met in 1878, when Falize’s review of the goldsmith’s work, jewellery and bronzes exhibited at the Exposition Universelle of 1878 was published in his periodical (XVIII, 1878, ‘Orfèvrerie et Bijouterie’ pp. 217-60, ‘Les Bronzes’ pp. 601-33), to which Louis Gonse added a Post Scriptum describing Lucien Falize’s own contribution:

‘ We find in him that noble ambition of combining as closely as possible practical skills with art, of merging the craftsman with the artists…’.

Louis Gonse also commented on Lucien Falize’s display at the Salon des Champs Elysées (Sociéte des Artistes Français)  of 1896, which was crowned by the lavishly enamelled gold hanap commissioned by one of the members of the purchasing committee for the Musée des Arts Décoratifs and which took 6 years to complete. At the request of various collectors, the goldsmith also created mounts for glass or porcelain vases too fragile to stand unsupported; the majority were by Emile Gallé, but others by Castellani, Tiffany and Deck were also included.

Gonse approved of this collaborative exercise, and the way in which they demonstrated ‘his principles in relation to the decorative arts; they are marvels of taste, logic and resourcefulness.’ (Les Salons de 1896, Le Monde Moderne, July 1896). Their shared interest in Japan is brought to light in Falize’s review of Louis Gonse’s pioneering retrospective exhibition of some 3000 Japanese works of art held at the Galerie Georges Petit in 1883.  Under the pseudonym of M.Josse, Falize penned an open letter addressed to Gonse and in it revealed his own intimate knowledge of Japanese metalworking techniques (La Revue des Arts Décoratifs, III, 1882-3, pp. 329-38 and pp. 353-363.

He also reviewed Gonse’s lavishly illustrated, two volume survey of L’art Japonais the same year (Revue des Arts Décoratifs, IV, 1883-4, pp. 207-12). Until the discovery of a group of three jewels by Lucien Falize contained in their original cases and bearing the initials of Anna Gonse on the lid,  it had not been known that her husband had been a customer of the jeweller. The fact that the case for this particular jewel bears the name of its owner on the reverse has led to the identification of the initials of the other two jewels.