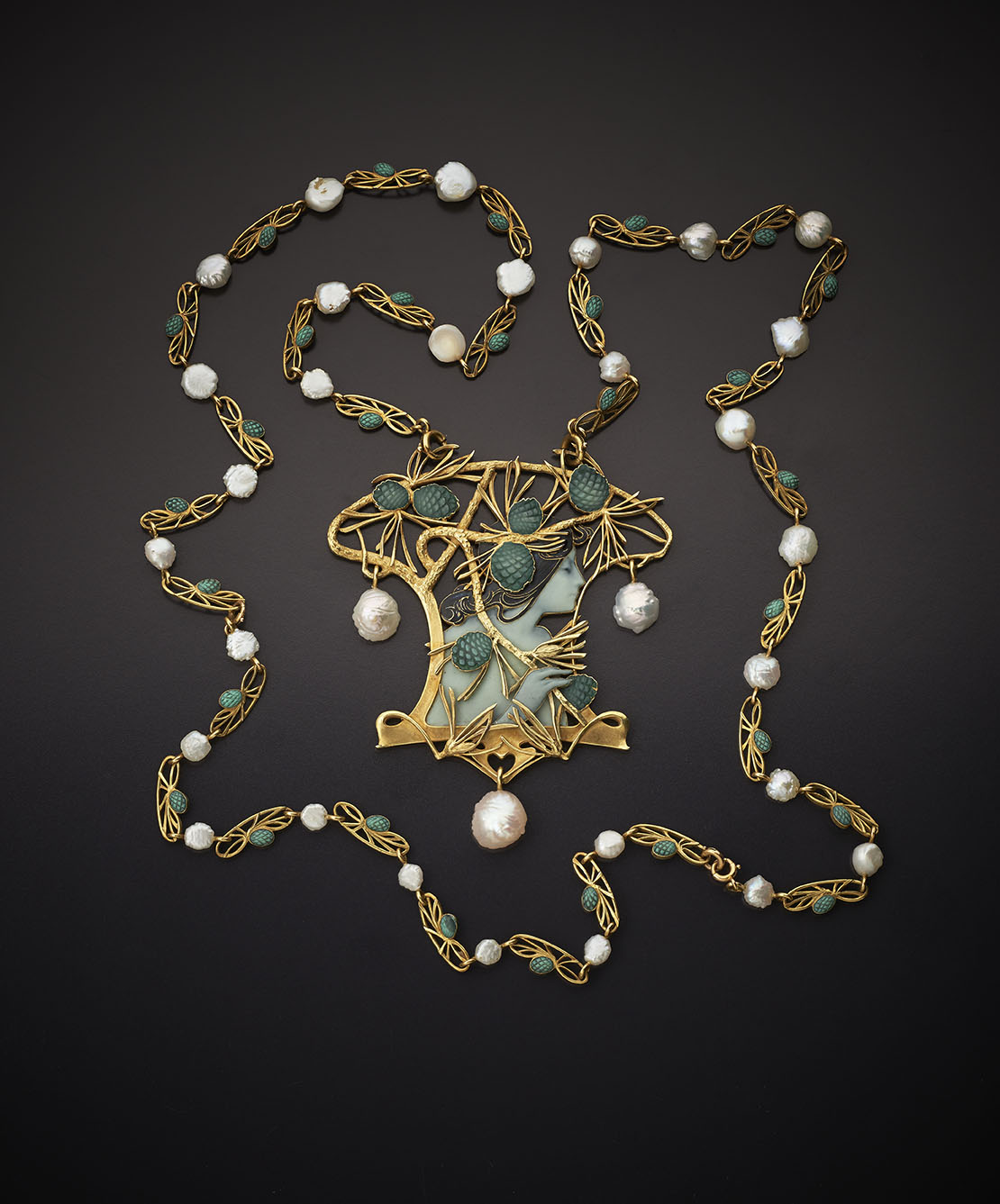 the pendant centred with a profile portrait of a woman enamelled opaque dusky grey, the sinuous strands of her hair enamelled deep blue, her hand clasping chased gold stems bearing pine cones of carved blue glass and gold needles that cover her head and form the curved framework of the jewel, the arched forms and the base suspending three baroque pearls. The reverse of the pendant is meticulously engraved to echo those motifs on the front and has a removable brooch fitting.

The unusually long chain is set with baroque pearls alternating with pierced gold motifs in the form of stylized needles each bearing a blue glass pine cone.  It is terminated with two bolt rings allowing it to be detached when the jewel is worn as a brooch. 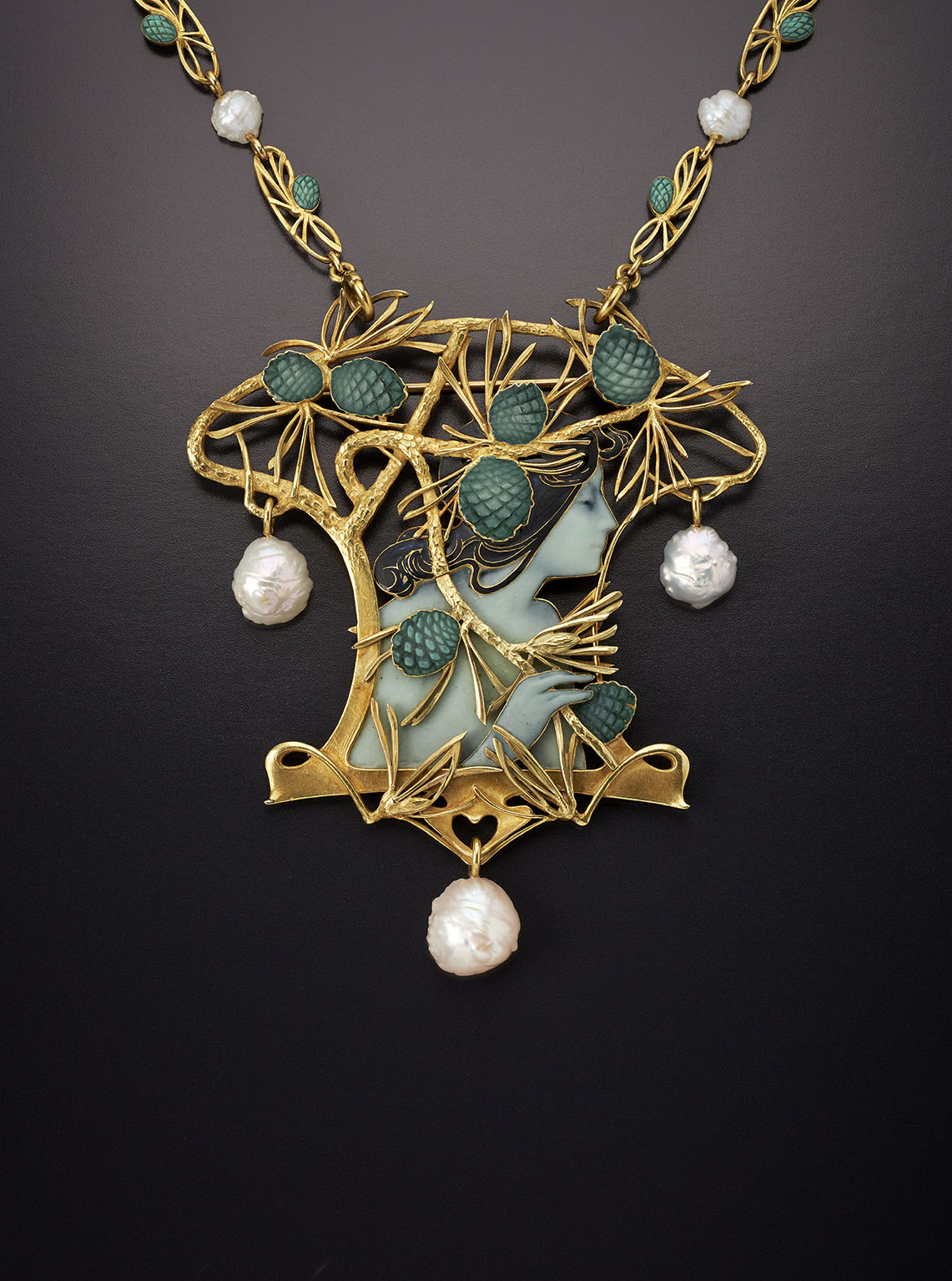 It is entitled ‘Young woman with pine branches’, the pine being identified as Pinus Silvestris. The reverse of the pendant jewel

The female portrait in the pendant is of Augustine-Alice Ledru (c.1870-1909), the daughter of the sculptor Auguste Ledru, friend of Auguste Rodin. René Lalique met Alice in her father’s studio in 1890 and fell in love with the young woman who would become his muse. They had two children, Suzanne born in 1892 and Marc born in 1900. They married in 1902 and she died seven years later, aged only 39. Relief of Alice Ledru by Lalique, (Corning Museum of Glass).

René Lalique carried out a low-relief plaque featuring Alice in c.1899 (an example of which is housed in the Corning Museum of Glass). In this present jewel he shows her enveloped in pine cones, being a symbol of eternity, thereby immortalizing her beauty. The fact that the jewel is suspended with pearls, emblem of Venus, is a testament to his love for her, as is the openwork heart at the base of the pendant from which the centre pearl is suspended.

René Lalique’s incorporation of pine cones and branches as decorative motifs in his goldsmith’s work and jewellery appears to date from  the year 1898 when he acquired the property named Clairefontaine near Rambouillet to the south of Paris. The pine trees populating his forest would be featured in his early photographs and studies of fir cones and needles were carried out by him during this period (an example  of which forms part of the Gulbenkian Museum collection in Lisbon). A pocket watch entirely decorated with gold stems, needles and enamelled fir cones is preserved in the collection of the Musée des Arts Décoratifs in Paris. A photograph of his Pine Forest near Rambouillet taken by Lalique, (Musee d’ Orsay, Paris).

When René Lalique moved premises from 20 rue Therèse to 49 Cours la Reine (now Cours Albert 1er) in 1902, he had the entire five-storey  façade specially designed by the architect Louis Feine. The pine cone motifs decorating the panels of glass Lalique made for the twin  entrance doors were echoed in the masonry and wrought iron balconies. So avant-garde was this decorative ensemble that an entire article was devoted to the premises in Art et Décoration entitled ‘La Maison de René Lalique’ by Tristan Destève.