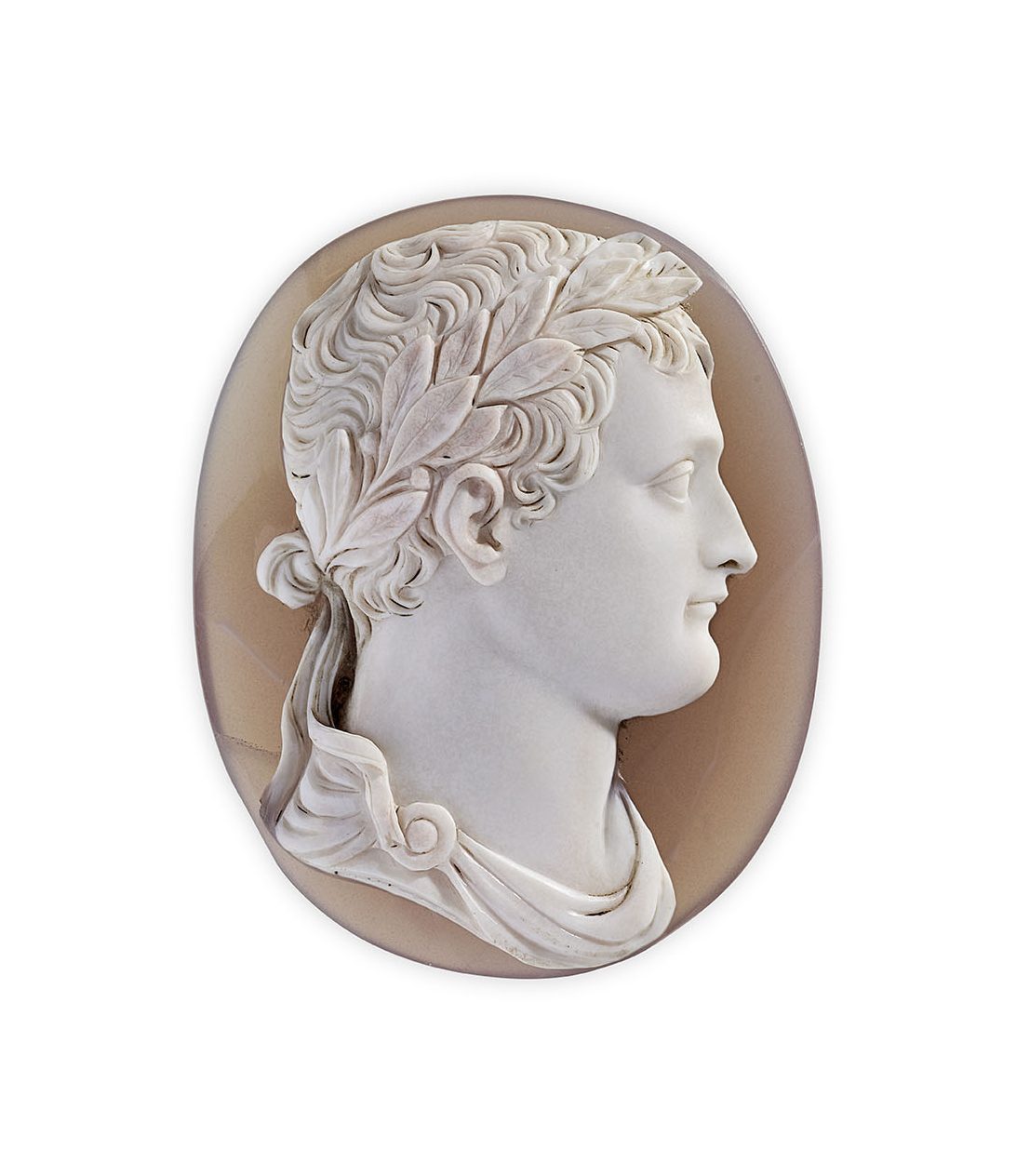 a sardonyx cameo of Emperor Napoleon in tones of pink/grey, the right facing portrait carved in a white layer of the stone, crowned with laurel in the ancient Roman style.

Emperor Napoleon and his family became important patrons of gem engravers working in Italy and France during the early nineteenth century. The portraits they commissioned in cameo and intaglio were gifted to family members, courtiers, and dignitaries and would be mounted into sumptuous jewels or gold boxes to be displayed as conspicuous symbols of allegiance.

It was important that the quality and beauty of the carvings befitted the wealth and sophistication of Napoleon’s new empire. The art of cameo cutting was intrinsically linked to the visual culture of ancient Rome and Morelli borrowed heavily from the conventions of Roman cameo portraiture when completing this gem. He depicted Napoleon in the same manner as a Roman Emperor, crowned with laurel and wearing a toga fastened with a brooch. Such cameo portraits enabled Napoleon to evoke the power and wealth of the Roman Empire, showing the heights of his own ambitions.

This cameo is one of a series of portrait gems of Napoleon completed by Morelli. The Roman gem engraver appears to have been particularly favoured by the Bonapartes, completing many commissions, including a suite of cameo portraits of the family that were mounted into a parure given to Letizia Bonaparte, Napoleon’s mother.

Morelli was born on 12th September, 1771 and was one of the most famous and highly respected cameo cutters working in Rome. It is believed that he was apprenticed to the gem engraver Angelo Amastini, later marrying his daughter Antonia. He is credited with having taught Benedetto Pistrucci. In 1812, Morelli was admitted to the Accademia di San Luca with Giuseppe Cerbara and Giuseppe Girometti.

The way in which Morelli won the commissions of the Bonaparte family is unclear, however, an intriguing document points to a possible answer. A receipt from the Treasurer General of the Royal House of Naples records the sculptor Antonio Canova delivering a cameo portrait of Joachim Murat, Napoleon’s brother-in-law. It suggests that Canova had a role in who was awarded such commissions, providing drawings and models from which the gem engraver could work. We know Pistrucci was commissioned to produce at least one portrait cameo based on a bust carved by Canova and we also know that Morelli was heavily influenced by Canova, creating many cameos based on his sculptures.

It is an arrangement we see repeated elsewhere, such as with the sculptor John Gibson who recruited the lapidary Tommaso Saulini to complete cameo portraits of Queen Victoria and Prince Albert in the 1850s.