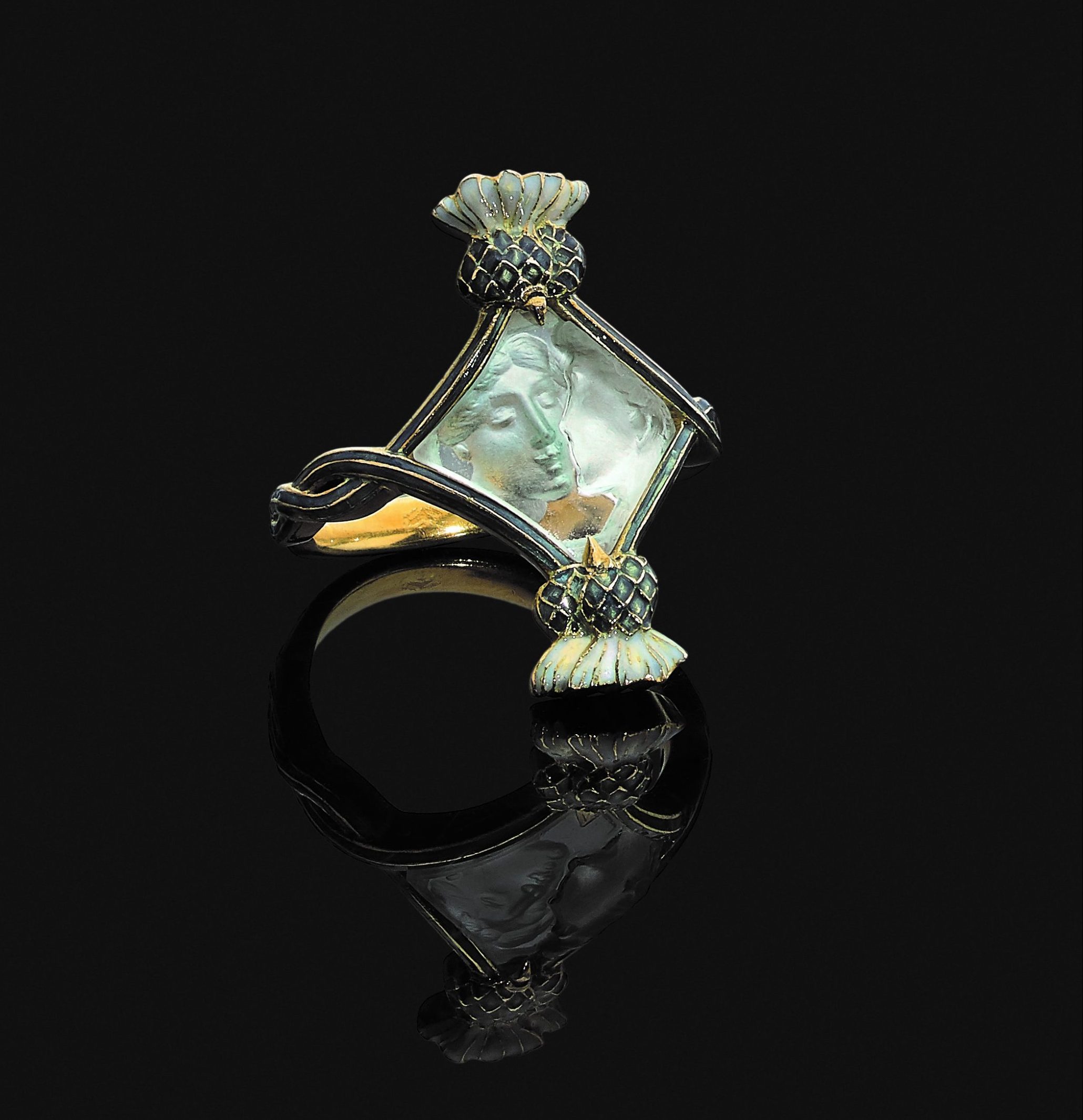 the centre panel featuring two lovers seen in profile sharing a kiss, the female figure on the left represented with her eyes closed carved in intaglio while the male figure on the right is carved in
cameo form, framed in a steel blue enamelled border of lozenge form that culminates into thistle flowers with white enamelled tips at the summit and the base of the ring, extending and intertwining to the sides to form its shank.

The depiction of couples sharing a kiss may be a common one in the pictorial arts, but its treatment is far rarer in the decorative arts and even more so in jewellery. One of the most iconic works of sculpture featuring the story of the ill-fated lovers Francesca da Rimini and Paolo Malatesta famously immortalised in literature in Dante Alighieri’s Inferno, was Auguste Rodin’s ‘Le Baiser’.

Begun in 1882, the sculpture was originally intended to form part of his monumental Gates of Hell but was exhibited as a separate work in the pavilion dedicated to his oeuvre situated on the Place de l’Alma as part of the Exposition Universelle of 1900. The space was deliberately conceived to echo his studio and in order to project a sense of works in progress, it was not the completed bronzes that were displayed, but the preparatory plasters.

René Lalique and Auguste Rodin were in correspondence during the 1890’s, a connection which was most likely facilitated by Augustine-Alice Ledru whom Lalique met in 1890 and married in 1902. She was the daughter of Auguste Ledru, a famous sculptor and close friend to Rodin who had worked with him in the completion of Bellona (1874), sculpting the helmet which crowned Rodin’s mythological portrait. It is therefore more than likely that Lalique visited Rodin in his studio at a time when the sculptor was working on ‘La Porte de l’Enfer’. He would consequently
have been familiar with the plaster casts made in preparation for the bronze elements of the Gates well before they were shown publicly in 1900.

It is the whiteness of plaster as a material that may have inspired the jeweller to select ivory to interpret his own first treatment of the subject. This appears to date from around 1896-1898 and is featured in a comb carved to show clothed bust portraits of a couple in an embrace and sharing a kiss, which was acquired by Calouste Gulbenkian in 1900. The subject is featured next a couple of years later, in a pendant and neckchain again of carved ivory representing bust portraits of a couple this time unclothed, surrounded by green enamelled foliate branches on gold stems bearing diamond-set flowers, one of which cascades over the lovers’ faces.

Approximately of the same date, c.1900-1902, similarly represented and again of carved ivory, a couple sharing a kiss appear in a brooch, their hair of chased gold amongst a thick blue enamelled foliage which surrounds them and intermingles with their hair.

The first use of a transparent material occurs around 1904-5, in a rock crystal pendant of triangular form in which the couple sharing a kiss are interpreted in intaglio and cameo for the first time, delicate stylised green enamelled motifs decorating the three corners. The jewel was acquired by Calouste Gulbenkian in 1907, the very year Lalique had a son by the name of René
9th Claude le Mesnil, (July), born from his relationship with Claudine-Juliette Le Mesnil (1870-1960) whom he met in London during the period 1904-5, coinciding with his exhibition at Agnew.

It is tempting to suggest that it was Claudine-Juliette le Mesnil who inspired the poetic usage of cameo and intaglio carving for the interpretation of the profiles of the lovers, since the date of the Gulbenkian jewel coincides with the beginning of her relationship with the jeweller, and because a brooch by Lalique which is similarly conceived is known to have been given by him to his lover. Presented to the Musée des Arts Décoratifs in 1960 by their son René Claude le Mesnil, it is of carved glass and bears the poignant inscription ‘Je rêve aux baisers qui demeurent toujours’, translating as ‘I dream of kisses that last forever’. Most revealingly, the brooch is bordered with chased and patinated thorns emblematic of suffering and of the tragic and agonising nature of their love, René Lalique being married to Augustine-Alice Ledru at the time.

The ring representing lovers sharing a kiss also of glass carved in cameo and intaglio is decorated with thistles, again symbolic of pain. These are the only two known examples of Lalique’s work in which this particular subject is accompanied by such eloquent attributes. Whether Claudine-Juliette was the intended recipient of the ring cannot be proven, but the inspiration cannot be denied given the provenance of the example in the Musée des Arts Décoratifs. It is certainly one of the most poetic and expressive demonstrations of the joy and pain of love in René Lalique’s work.