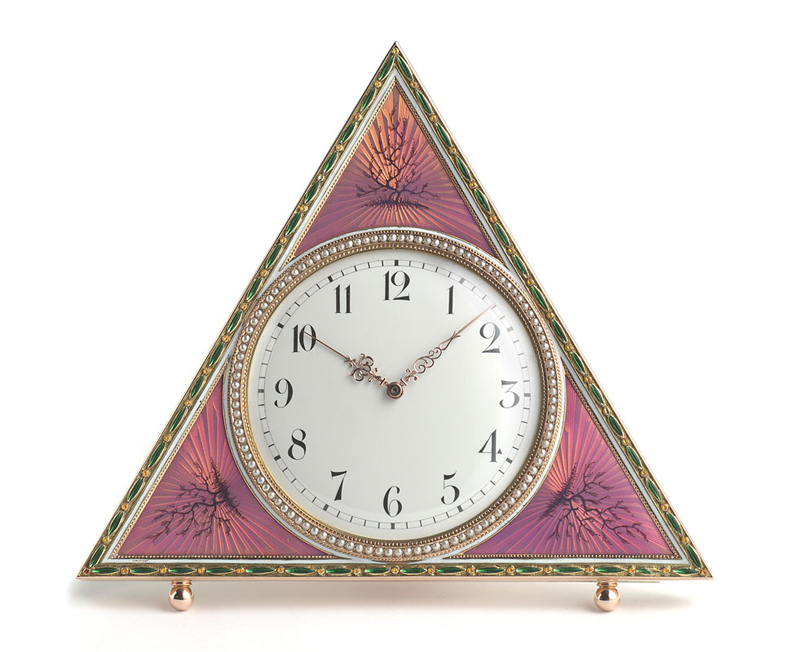 triangular in shape, centred by a white enamel dial with Arabic chapters and openwork gold hands, surrounded by a gold bezel set with pearls, each corner enamelled translucent fuchsia over a sunburst guillochage overlaid with hand painted dendritic motifs, the outer edge decorated with a border of alternating leaves and berries, standing on two gold ball feet and supported by a scrolled gold strut to the reverse.

Purchased by Tsar Nicholas II and Tsarina Alexandra Feodorovna on
4th December 1901 from Fabergé in St Petersburg for 215 roubles.

Tsarina Alexandra Feodorovna selected this clock to be shown in an exhibition in March, 1902, entitled Artistic Objects and Miniatures by Fabergé. It was held in the Von Dervise Mansion on the English Embankment, St. Petersburg and was sponsored by the Tsarina in aid of the Imperial Women’s Patriotic Society Schools. Members of the Imperial Family, including the Tsar, Tsarina and Dowager Tsarina lent their personal treasures to the display; the first exhibition of Fabergé ‘s work ever held.

It is clear from photographs of the exhibition that the clock was placed in its vitrine between a pair of Fabergé frames containing portraits of the Tsarina’s husband and her daughter Grand Duchess Olga (these now form part of the India Early Minshall Collection in the Cleveland Museum  of Art). Behind the clock sat a gold mounted Fabergé book given by the Tsar to the Tsarina on the day of their coronation in May 1896 (now in the collection of the Kremlin in Moscow).