A Secessionist Vase by Friedrich Goldscheider mounted by Carl Fabergé 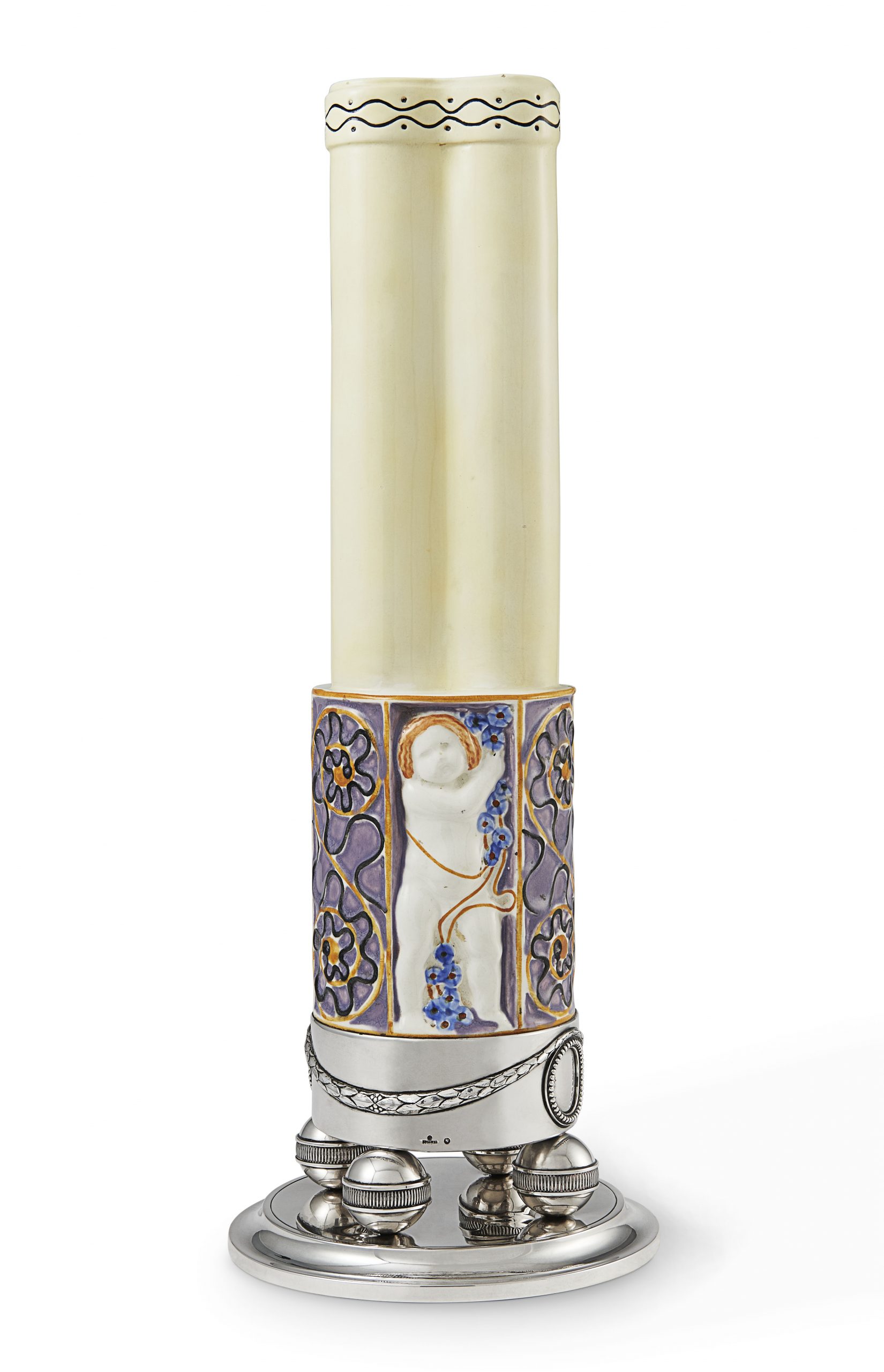 a ceramic vase of trilobed form applied with a cream glaze with black undulating frieze on the rim, the body composed of six panels, three representing single cherubs en relief gathering blue flowers alternating with purple glazed panels applied with stylized black and and yellow floral motifs, the whole supported in a silver mount applied with a trail of laurel leaves and two beaded circles, poised on four bun feet decorated centrally with a reeded band, that are themselves fixed to a circular base.

The reverse of the glazed section bearing the stamp of Friedrich Goldscheider, Wien, with the numbers ‘01480’, ‘75’ and ‘10’. The side of the silver mount and the reverse of the base stamped ‘Faberge’ in Cyrillic. Moscow, 1908-1917. Engraved with the Fabergé inventory number 35060.

The design of the ceramic vase can be attributed to Michael Powolny, one of a number of ceramicists and sculptors who collaborated with Marcell and Walter Goldscheider, sons of Friedrich, and were instrumental in the company’s international success. Michael Powolny (1871-1854), born in Vienna, learned the pottery trade from his father and pursued ceramics at the Industrial Art School in Znaim, in 1894, followed by several years at the Wiener Kunstgewebeschule. In 1906, along with Bertold Löffler, he founded the Wiener Keramik Workshop in Vienna, which became part of the Wiener Werkstätte one year later.

The combination of floral elements with cherubic figures is characteristic of Michael Powolny’s work and the use of these motifs and the pose of the cherubs in this vase recalls his ‘Seasons’ of 1907 in which Autumn is denoted by an identical cherub holding grapes while Winter is represented with such a cherub holding a wreath.

Works designed by Powolny form part of a number of museum collections including the MAK in Vienna, the Metropolitan Museum of Art and the Neue Galerie in New York, and the British Museum.