Formerly in the Collection of A W N Pugin: An Enamelled Silver Teapot 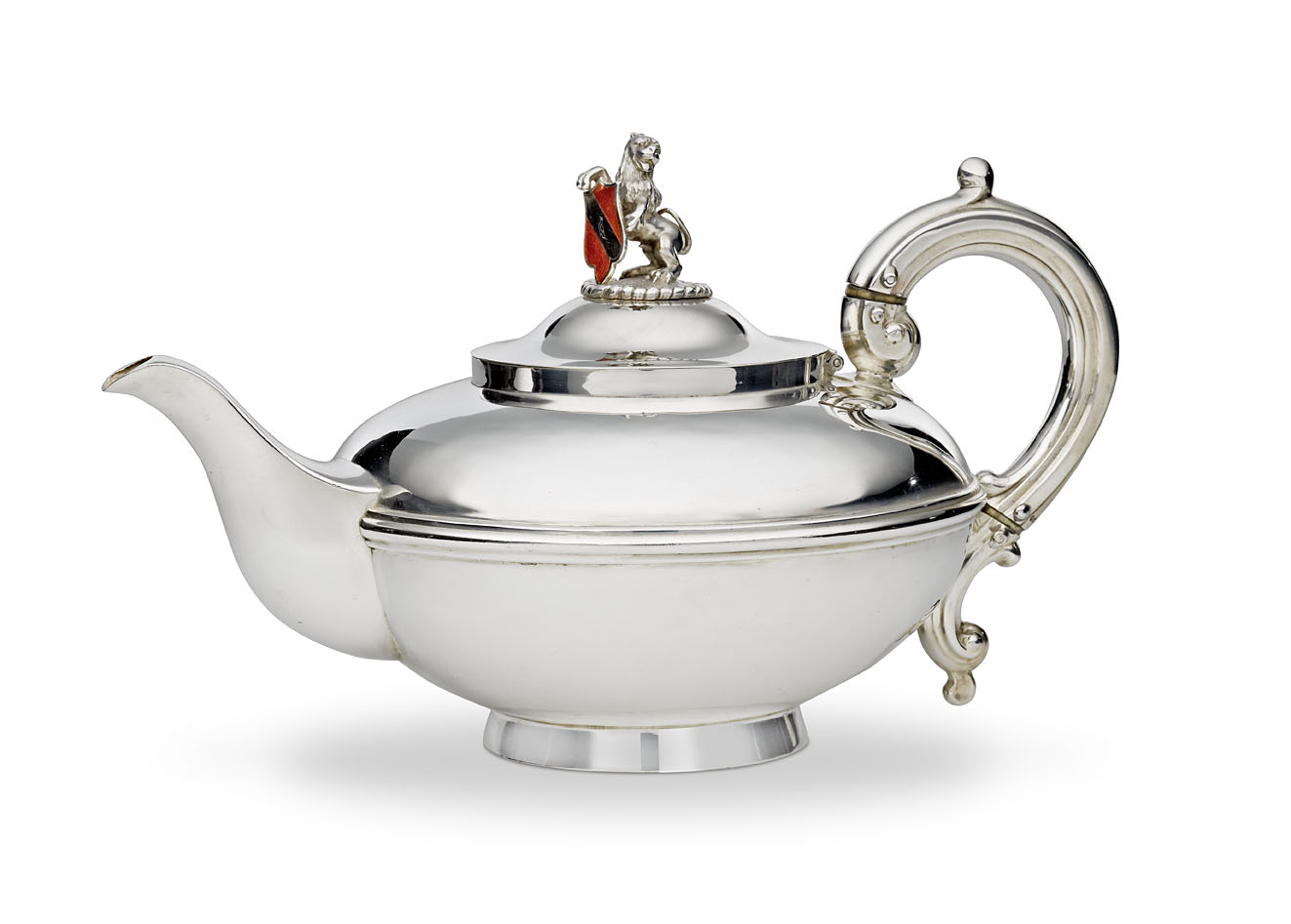 the domed and hinged lid topped with a cast rampant lion finial standing on a wreath of colours, holding an enamelled coat of arms belonging to Augustus Welby Northmore Pugin. The coat of arms is after Pugin’s own design. The body of squat circular shape applied with a moulded girdle. The fluted scroll handle with ivory spacers opposite a plain curved spout, all raised on a collet foot.

Inherited by his third wife Jane Knill. Thence by decent through their daughter Margaret.

Augustus Welby Northmore Pugin was born in 1812, the son of the notable French  architectural draftsman and historian Augustus Charles Pugin. He is famous around the world as the leading architect and designer of the Gothic revival. His greatest and most enduring works are the interiors and ornamentation of the exterior of the new Palace of Westminster in London.

From an early age, Pugin displayed a prodigious talent for architectural subjects and by the age of 13 was helping his father with sketches for the family business. In 1827, Pugin’s father was approached by the firm Morel & Seddon to furnish the new apartments at Windsor Castle. The young Pugin was heavily involved in this commission.

Pugin would complete designs for silver and metalwork during his lifetime. John Bridge, one of the partners in Rundell and Bridge, spotted the young Pugin in the print room at the British Museum making copies of Albrecht Durer’s designs for goblets. Bridge was immediately struck by Pugin’s talent and there is evidence to suggest that he commissioned the young man to help design a cup in the Gothic taste which was later acquired by King George IV in 1827 (now known as the Coronation Cup).

Pugin designed every aspect of his interiors and churches, including the delicate metalwork. This was entrusted to the Birmingham firm of John Hardman. It was Hardman who supervised the manufacture of Pugin’s jewellery designs, including the parure of jewellery which was eventually given to his third wife Jane and was exhibited at the Great Exhibition of 1851.