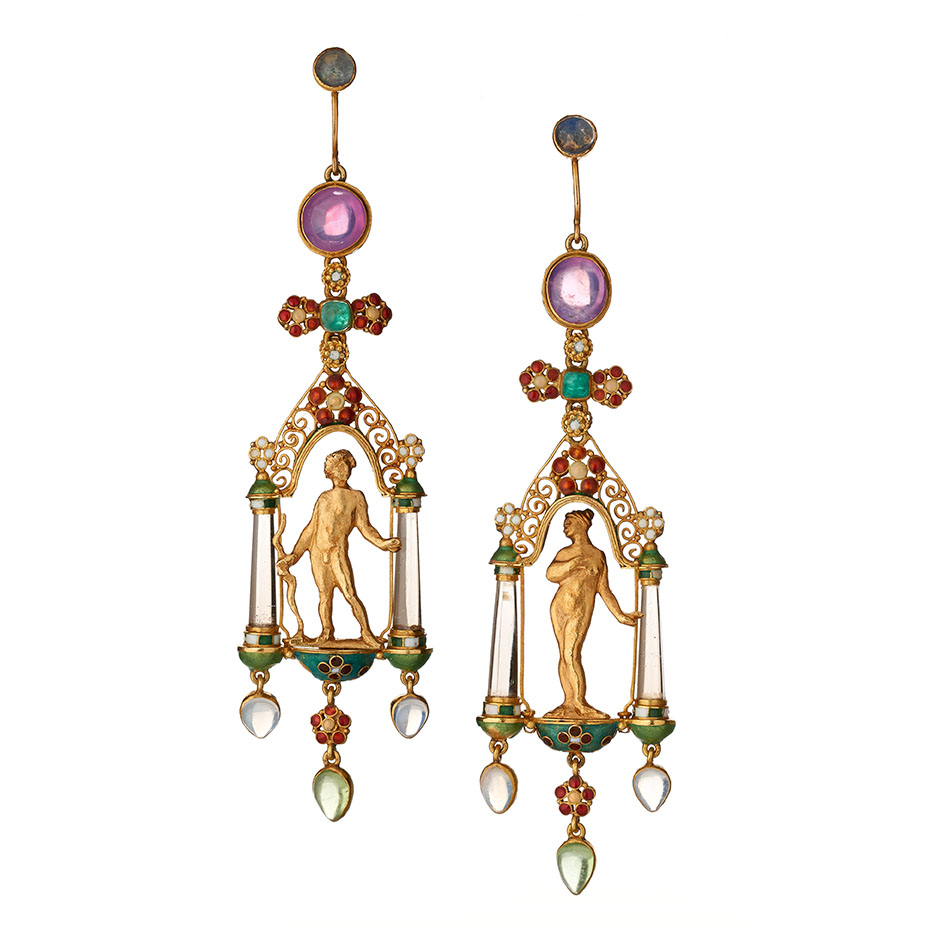 with cast and chased figures of Psyche and Cupid standing beneath a baldachin of enamel and scrolling gold filigree, carved rock crystal columns with striped enamel terminals, suspending pear shaped drops of moonstone and peridot, all hanging from cabochon moonstones and pink star sapphires with a row of flower heads centred by sugarloaf emeralds.

Henry Wilson (1864-1934) designed jewellery using architectural forms and historic subjects which would have been familiar to late-Victorian society. His originality stemmed from the reinterpretation of classical, byzantine and medieval motifs with his vivid and vibrant technicolour palette of enamels and gemstones. The late 19th century saw a fundamental re-evaluation of the seemingly monochromatic past, a realm of limewashed churches and white marble sculptures. With the excavation and restoration of historic monuments across Europe, it became increasingly clear that colour played an important part in the ceremonial and spiritual lives of our ancestors. Henry Wilson’s explosively colourful creations seem illustrative of this newly developed understanding, with classically composed figures of Psyche and Cupid standing beneath baldachins of green, red, purple and white.

Wilson’s workshop was situated in the basement of Vicarage Gate House in Kensington, beneath the architectural practice he had taken over from J D Sedding in 1891 and relocated. The close proximity of his studios allowed Wilson to work simultaneously on large scale, architectural projects (such as the colossal bronze doors for the Cathedral of Saint John the Divine in New York), as well as smaller scale creations in precious metals and enamel.

His reputation as an architect and artist grew throughout the early the 20th Century. He lectured at the Royal College of Art and Central School of Arts and published the first edition of his masterly book ‘Silverwork and Jewellery’ in 1903. In 1914, he displayed a selection of jewels and metalwork at the exhibition ‘Arts et Metiers de la Grande Bretagne’ in Paris and in 1925 was appointed chairman of the committee for selecting works to be displayed at the exhibition ‘Arts Decoratifs’ of the same year.