Cupid in Chains by Benedetto Pistrucci, 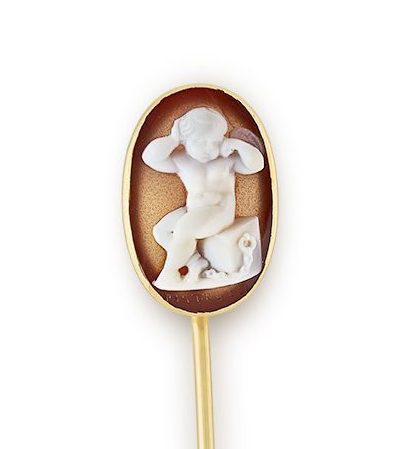 carved in a pink coloured sardonyx, the figure of a putti seated on a rock, his ankle in chains, his arms and hands raised to his face, wiping away tears. Mounted in a yellow gold stickpin.

The derivation of this eccentric image can be traced back to Classical antiquity. A marble carving of a young boy chained by the waste to a plinth (dating to the 2nd century AD although likely based on an earlier Greek composition) forms part of the collection of the Uffizi in Florence. It had previously resided in the Villa Medici in Rome until 1625.

Whilst the composition differs, the symbolism of the image is clearly the same. The scene is likely an allegory to the God Cupid, depicted without his wings and in chains, being punished by the goddess Nemesis for the mischief he has created with his bow and arrow. As Antipater of Thessalonica wrote:

“Who bound your hands to the pillar in a fast knot?
Who opposed fire with fire and guile with guile?
My boy, no tears! Do not wet your sweet face!
For you take delight in the tears of young men.”

The same composition was also carved by Giovanni Pichler and Antonio Santarelli (see No.: 39.22.49 of the Milton Weil Collection at the Metropolitan Museum of Art, New York). It suggests all three gem engravers were referring to a shared source.