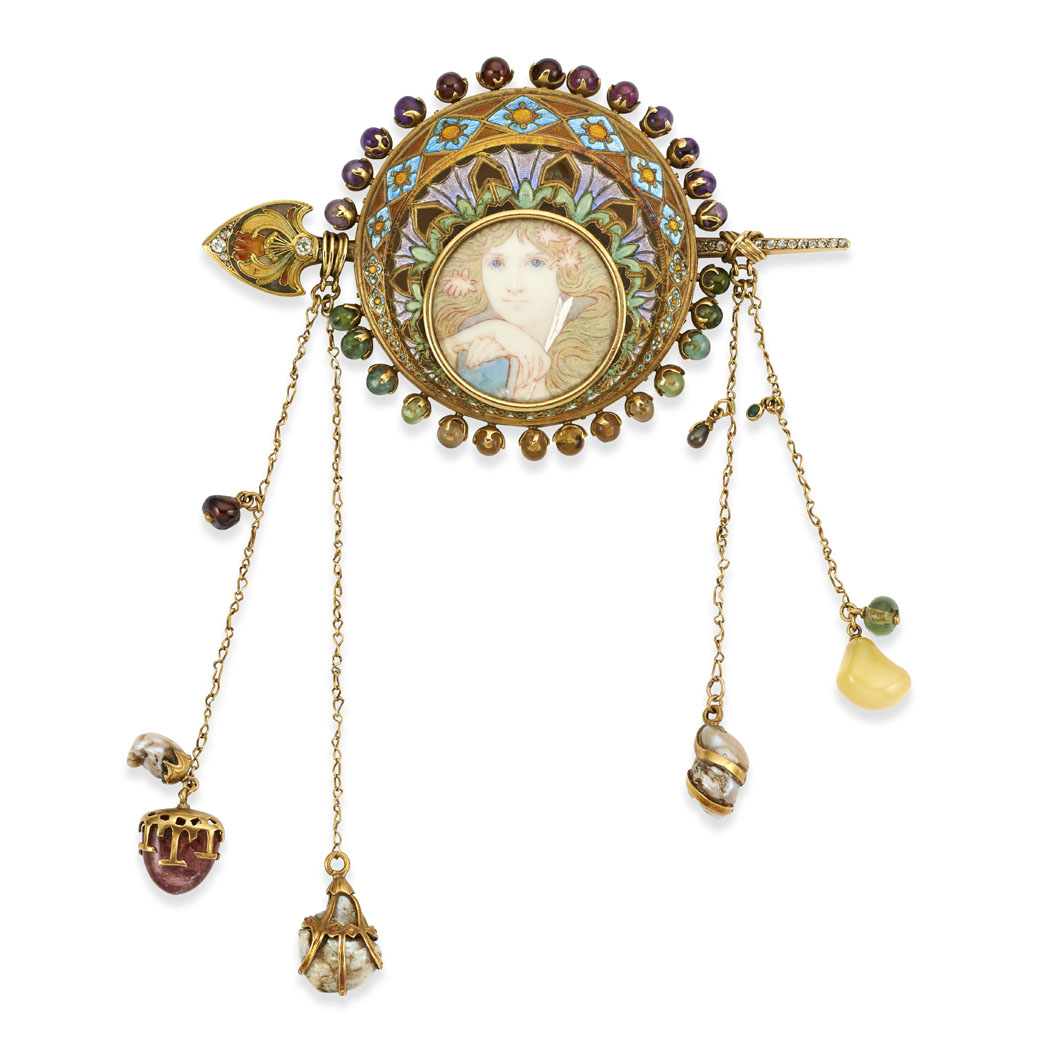 of circular form centred with a portrait bust of a female figure painted on vellum in pastel tints, the hair picked out in gold paint, surmounted by two crescent-shaped bands, the inner crescent decorated with stylized floral motifs, the mauve petals and green enamelled leaves against a plique-à-jour enamelled ground, the outer crescent applied with geometric stylized flowers enamelled blue and amber against a deep amber ground, the whole bordered with radiating vari-coloured cabochons ranging in hues from amethyst at the top through green at the lower sides and pale amber at the base, the horizontal pin with an enamelled and diamond set finial, with two asymmetrical chains hanging on each side of the jewel suspending various baroque pearls and semi-precious stones, three set in gold cage mounts.

A variant of the jewel was exhibited at the 1900 Exposition Universelle, now lost and known only from archival photographs, one of which is published in Henri Vever’s La Bijouterie Française au XIXe Siècle (Vol. III, p.625, tr. ed. p.1118).  In that example the female figure holds a flower, whereas in this she holds a quill pen. A preparatory watercolour design by Mucha for each of the two miniatures formed part of an exhibition devoted to his work held at the Grand Palais in Paris in 1980.  They are described as ‘crayon, aquarelle, trace de dorure sur carton’, and were formerly in the collection of Georges Fouquet.  That for the surviving jewel measures 2.85 cm in diameter, precisely the dimension of the miniature within the corsage ornament. Both female subjects are set within an ornamental crescent halo, one of Mucha’s favoured ornamental devices to be seen in many of his posters and decorative panels. The suspended stones and pearls vary in both jewels in number and in type, and only in the surviving example is the horizontal pin set with diamonds.

Georges Fouquet’s works created in collaboration with the graphic artist Alphonse Mucha between 1899 and 1901 are truly spectacular in design and scale. They are also highly distinctive, bearing elaborate chainwork reminiscent of Byzantine ornaments. A large proportion of these jewels formed the centerpiece of Fouquet’s stand at the Exposition Universelle of 1900.   By that time Georges had been running the firm founded by his father Alphonse Fouquet for five years. His appetite for new ideas had encouraged him to approach the Czech-born, Paris based Mucha, whose posters and decorative lithographs constituted some of the most exuberant manifestations of French Art Nouveau.  Having produced theatrical posters for productions featuring Sarah Bernhard, Mucha designed an elaborate snake bracelet for the famous actress which was made by Fouquet in 1899. So successful was their partnership that Fouquet commissioned Mucha to design the façade and interior decoration for his new premises on the Rue Royale, which opened in 1901 (Vever, Vol. III p.627, tr. ed. p.1119).   Ornamental devices such as that of the crescent halo were also present in the decorative scheme.

Of the jewels that were the product of Fouquet and Mucha’s artistic collaboration, this corsage ornament is extraordinarily rare, being one of only four known to have survived. It eloquently demonstrates the versatility and prodigious talent of two renowned artists at the pinnacle of their respective careers, their mastery of differing yet complementary disciplines contributing to create a masterpiece of Art Nouveau jewellery.