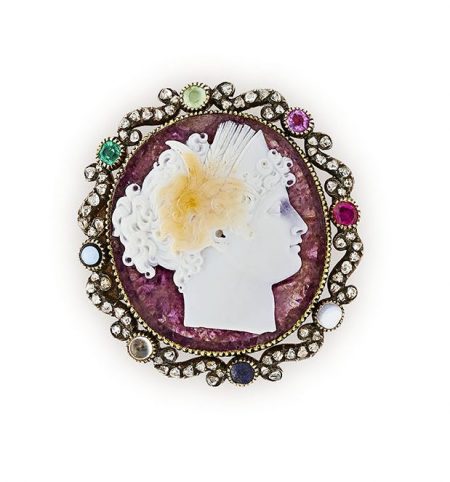 carved in amethystine quartz, depicting the goddess of the harvest Ceres in right facing profile, wearing a diadem and ears of wheat and sickles in her hair.

As goddess of the harvest, Ceres was associated with the virtues of fertility and of motherhood. The intention of the jewel was no doubt to imply that ‘Caroline’ shared these admirable attributes with the goddess. The Museo Napoleonico in Rome have a notably comparable brooch comprising a painted enamel portrait of Napoleon’s youngest sister Caroline Bonaparte (1782-1839) mounted in a border of precious and semi-precious stones which also reveals a hidden message.

The Emperor Napoleon gave his sister Elisa Bonaparte (1777-1820) a bracelet on the occasion of the birth of her daughter in 1806, which also concealed a rebus revealed when the first letter of each gemstone was added together. It was made by the jeweller Francois-Régnault Nitot (1779-1853) and was set with various gemstones, spelling: ‘Napoleon 3 Juin 1806 a Lucques.’