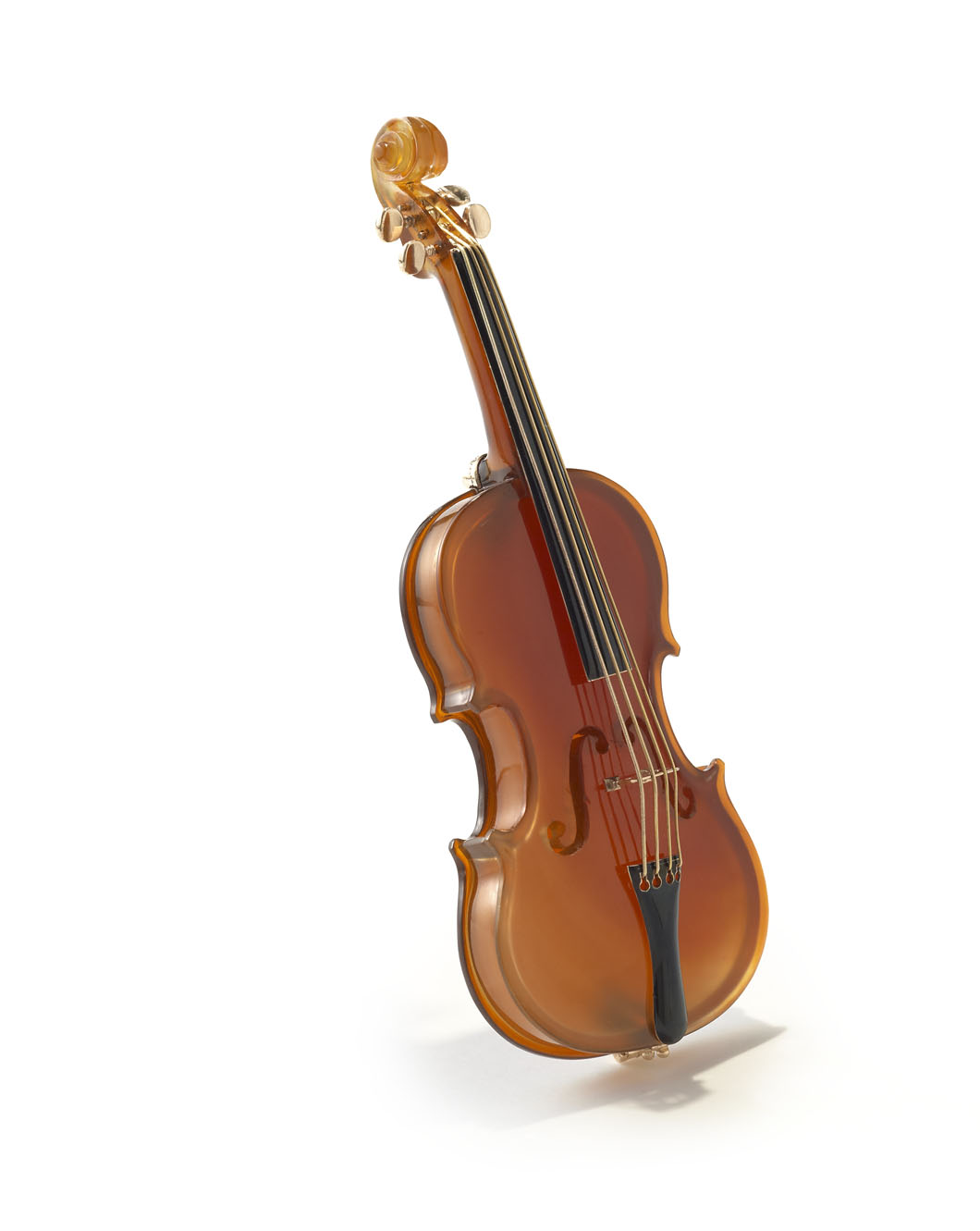 in the form of a violin, carved from a single piece of carnelian agate, carefully chosen for its unique striations and colour to simulate the texture of spruce or maple wood, the fittings faithfully recreated in gold, the fingerboard and tailpiece highlighted with black enamel, the gold strings kept taut across the bridge by four adjustable gold pegs, the gold hinges to the reverse in the form of stylized fleur d’lys.

The lid satin bearing a Cyrillic inscription written in ink, which translates as
“Violin (072) of E.A.Balashova” 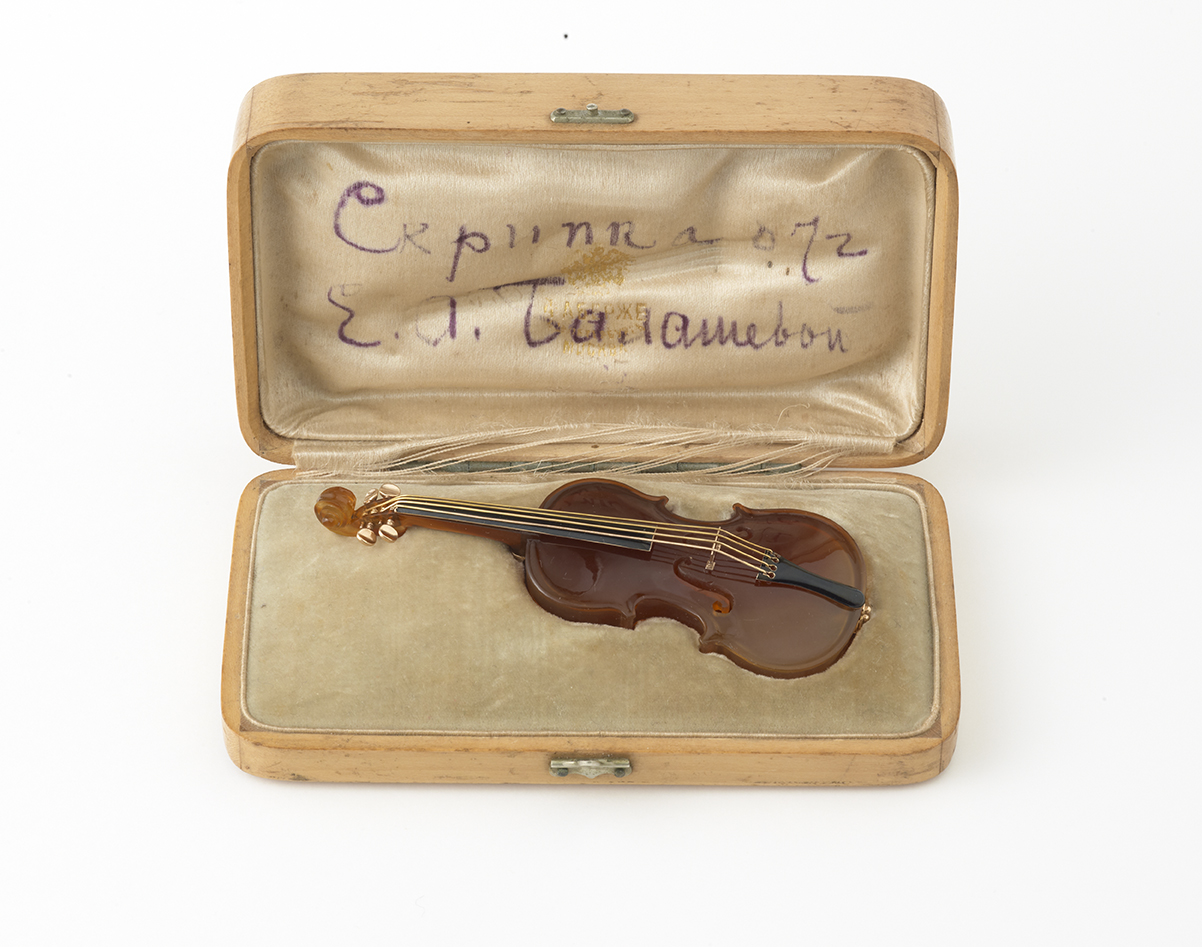 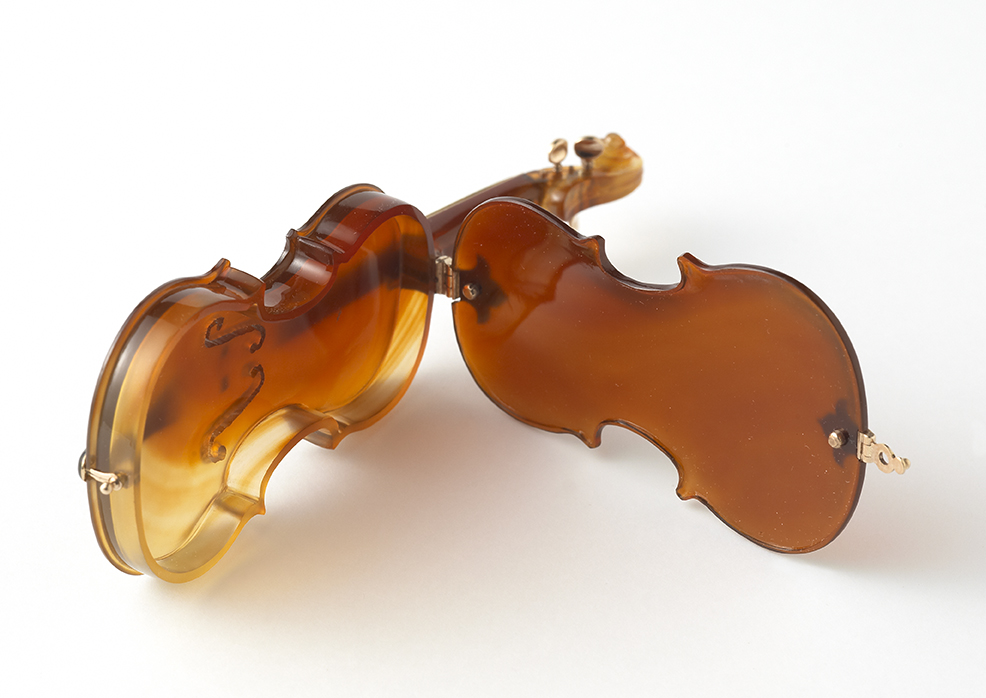 Confiscated by the Commissariat between 1920-1921.

Ekaterina Andreevna Balashova (1848-1931) was a notable member of the Russian aristocracy.

Her mother was Countess Sophia Mikhailovna Shuvalova (nee Vorontsova) (1825-1879),  the daughter of the famous Russian field-marshal and Governor-General of Novorossiya, His Serene Highness Prince Mikhail Seymyenovich Vorontsov (1782-1856). Ekaterina’s maternal grandmother was Elizaveta Ksaveryevna Vorontsova (1782-1856), who was an intimate friend of the famous writer Alexander Pushkin, and is believed to have inspired the character of Tatiana in Pushkin’s seminal novel Eugene Onegin.

Ekaterina’s father was Count Andrei Pavlovich Shuvalov (1816-1876), a gentleman who was noted for his dashing good looks among members of the Russian court. The writer Mikhail Lermontov was so struck by his dashing figure, that it is said he used Shuvalov as inspiration for the hero Pechorin in the novel “Hero of Our Time”.

In 1869, Ekaterina married Nikolai Balashov (1840-1931), an industrialist and land owner with important Imperial connections. His grandfather was His Serene Highness Prince Pascevich Count Erevansky (1788-1856) and his mother Alexandra Ivanovna (1818-1845) had been maid of honor to Empress Alexandra Feodorovna, wife of Emperor Nicolas I.

Both Ekaterina and her husband Nikolai were frequent visitors to the palace of Grand Duke Vladimir Alexandrovich (1847-1909). The family owned Massandra, a palace in the Crimea which they sold to Tsar Alexander III and at state occasions Nikolai would often be found playing cards with the Tsar.  The couple lived with their three children in a palace at Mokhovaya, 10 in St Petersburg. Their home was only a short walk away from Fabergé, which was situated at Bolshaya Morskaya, 24.

In the archives held by the Hermitage Museum, there is a record of items confiscated from 9 Krasnaya Street in St Petersburg between 1920-1921. The address belonged to I I Vorontsov-Dashkov, who was married to Ekaterina’s sister, Elizaveta Vorontsov. Among the items taken by the Soviets was:

“a violin from light turtle [sic], decorated with golden strings with small screws. Work of Faberge”

It is likely that Ekaterina moved her treasures to the home of her sister before she left Russia for Europe in 1917. This may explain the writing on the inside of the lid satin, a notation added by Ekaterina so the piece could be identified when she returned to Russia.