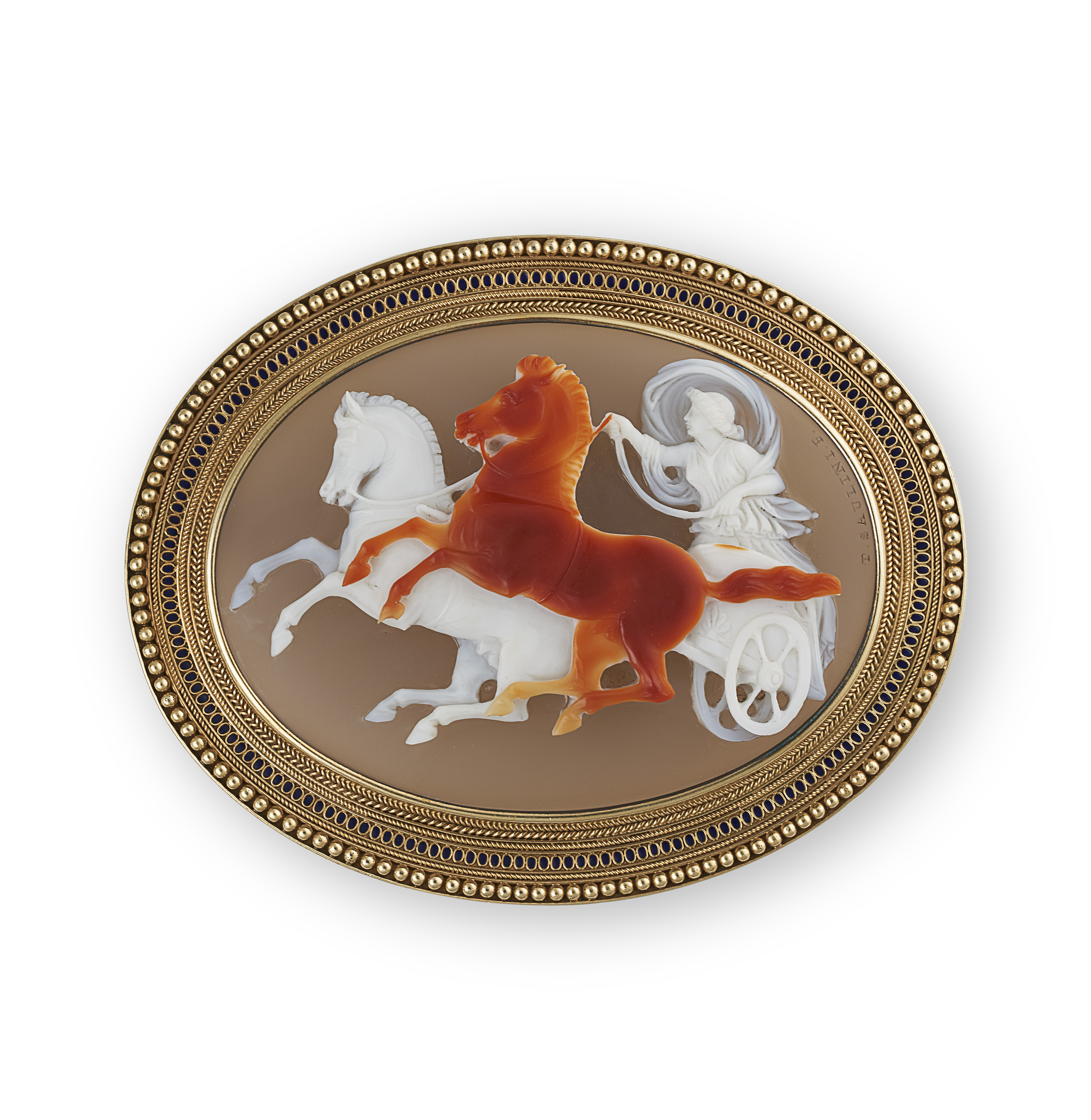 carved from a single piece of orange and white sardonyx, depicting the Roman goddess of the dawn Aurora riding her chariot across the sky, being pulled by two horses.

Mounted in a yellow gold brooch, the border decorated with twisted wirework, beading and cells of blue enamel. The International Exhibition of 1862, hosted in London, was the last show at which Tommaso Saulini exhibited his work. He was already unwell by this point and died two years later in 1864. Among the cameos he exhibited in 1862 was a gem entitled ‘Aurora driving her biga’ which was carved in a three layered hardstone. Given this description and the monumental scale of this cameo, it seems highly likely that this gem was the same as that exhibited in 1862.

The style of the mount is also consistent with another hardstone cameo of a similar period which was likely to have been shown in the exhibition: a portrait of the goddess Roma carved in a similarly layered deep orange sardonyx.
Saulini won a medal for his display of 1862 and the jury, when making their decision, cited a cameo ‘chariot.’ The subject of Aurora riding her chariot across the sky is derived from Classical antiquity, such as the two cameos which resided in the collection of the Duke of Marlborough, which were published as engravings by Francesco Bartolozzi (1727-1815) and Baptista Cipriani (1727-85) in Gemmarum antiquary delectus ex praestantioribus desumptus, quae in dactyliothecis ducis Marlburiensis conservantur; Choix de pierres antiques gravees, du Cabinet du Duc de Marlborough between 1780-83. A shell version of Aurora driving her biga signed Saulini, possibly by Luigi Saulini (Tomasso’s adopted son), forms part of the collection of the British Museum (Museum Number: 1978, 1002.293). It is likely that it is a shell version of this hardstone cameo, which was carved for visitors to acquire at the exhibition as a souvenir.
Curiously, as Gere and Rudoe identify, an immense cameo of Aurora driving her biga can be seen in a satirical cartoon published in the magazine Punch in 1859, adorning the breast of a lady visiting Castellani’s shop in Rome. It was a comment on the mania for the archaeological style in Europe. Saulini would have enjoyed a distinguished reputation by 1862. In 1851, he had shown work at the Great Exhibition in London, a series of cameos which included work based on sculpture by contemporary artists Bertel Thorvaldsen (1770-1844), at whose studio Saulini had been apprenticed, and John Gibson (1790-1866).
In 1856, Saulini was commissioned to carve a series of double portraits in hardstone and shell of Queen Victoria and Prince Albert, to be mounted into Royal Family Orders. The commission was won with thanks to Gibson, who was tasked with ensuring its completion when Saulini’s productivity started to dwindle due to ill health.