An Imperial and Royal jewelled and gold mounted chrysoprase clock by Carl Fabergé,

fashioned from a single block of chrysoprase in a rectangular upright form, the front centred to the top with a circular platinum bezel set with rose diamonds, containing an opaque white enamel dial beneath a domed glass, with Arabic chapters and openwork gold hands, mounted with a chased two-coloured gold rosette encircled by a laurel wreath, with recessed silver gilt lined base containing the original gold key, three gold keyholes to reverse with gadrooned gold covers, the mechanism by Valme Geneva. 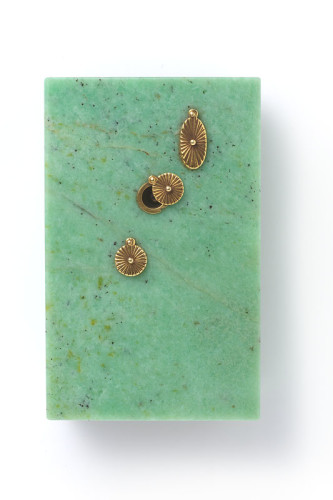 Given by the Grand Duke to Her Majesty Queen Mary, Queen Consort of King George V, Empress of India.

Given by Queen Mary to her granddaughter Her Royal Highness The Princess Margaret, Countess of Snowden.

The design for this clock is contained in the Wigström workshop album, page 311, dated 27th March 1914.