A Hardstone Cameo by Girardet mounted by Pierret 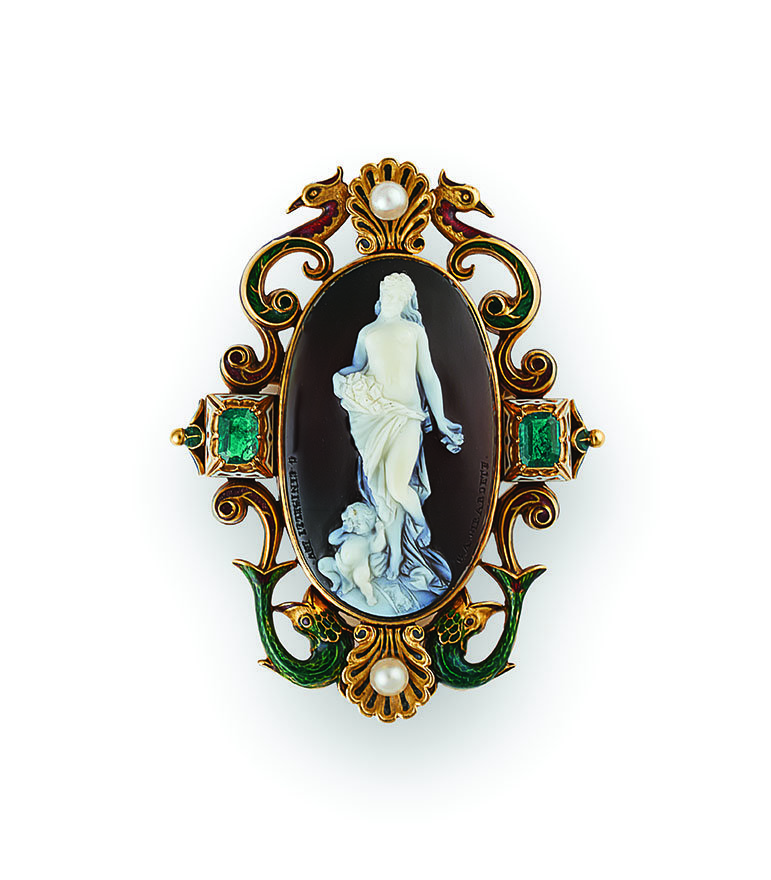 in black and white sardonyx, depicting a personification of Dawn, represented by a beautiful woman draped in fabric, carrying a full bouquet of flowers in her arm. Dusk is portrayed as a small child at her feet, angrily rubbing their tired eyes in distress.

Mounted in an ornate enamelled gold and gem-set brooch in the Renaissance style, comprising of stylised scrolls which morph into fishes and birds, flanked by scalloped seashells mounted with pearls and emeralds.

Accompanying the signature on the cameo is the engraving ‘G. Ciniselli Inv.’ This refers to sculptor Giovanni Ciniselli (18321883), who originally conceived the composition of the scene as a marble sculpture which he completed circa 1870, entitled ‘Dawn and Dusk.’

Ernesto Pierret (1824-1898) moved to Rome from Paris, where he trained as a young man. He opened his first shop in Rome in 1845, and is listed in 1867 in Murray’s ‘Handbook to Central Italy and Rome,’ which praised his creations in the Classical style. After his marriage in 1865, Pierret moved to a Renaissance palazzo at 20 Piazza di Spagna in the heart of the jewellery quarter. His wife’s father was a papal lawyer and his connections to the Vatican provided the firm with distinguished customers. According to an advertisement, they counted among their clientele the Queen of Italy.

In 1884, Ernesto’s son Luigi exhibited at the Turin International Fair where, among the items on display, are listed jewels mounted with cameos by Roman gem engravers such as Amastini, Girometti, Pichler and Morelli.