An Enamelled Gold and Gem-set Pendant by Louis Wièse 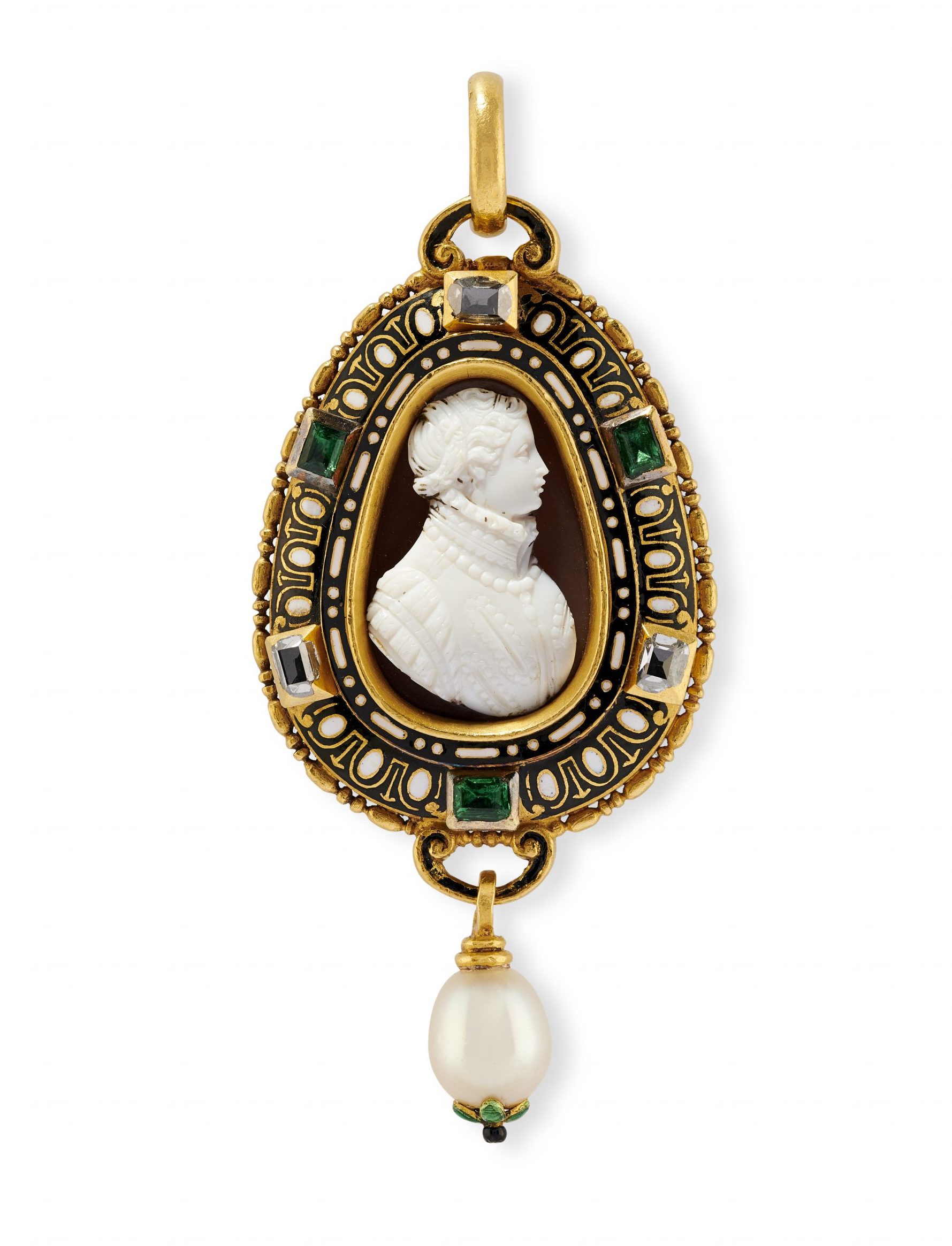 centred with a sardonyx cameo depicting a Renaissance noblewoman, surrounded by an intricate border of opaque black and white champlevé enamel, mounted with alternating table cut emeralds and diamonds in rub over gold collets, the reverse concealing a locket compartment beneath a portrait of a Classical maiden in fine gold repoussé, surrounded by a border matching the design to the front, decorated with opaque white and translucent green enamel over an engraved ground, suspending a single pearl capped with green enamelled leaves. 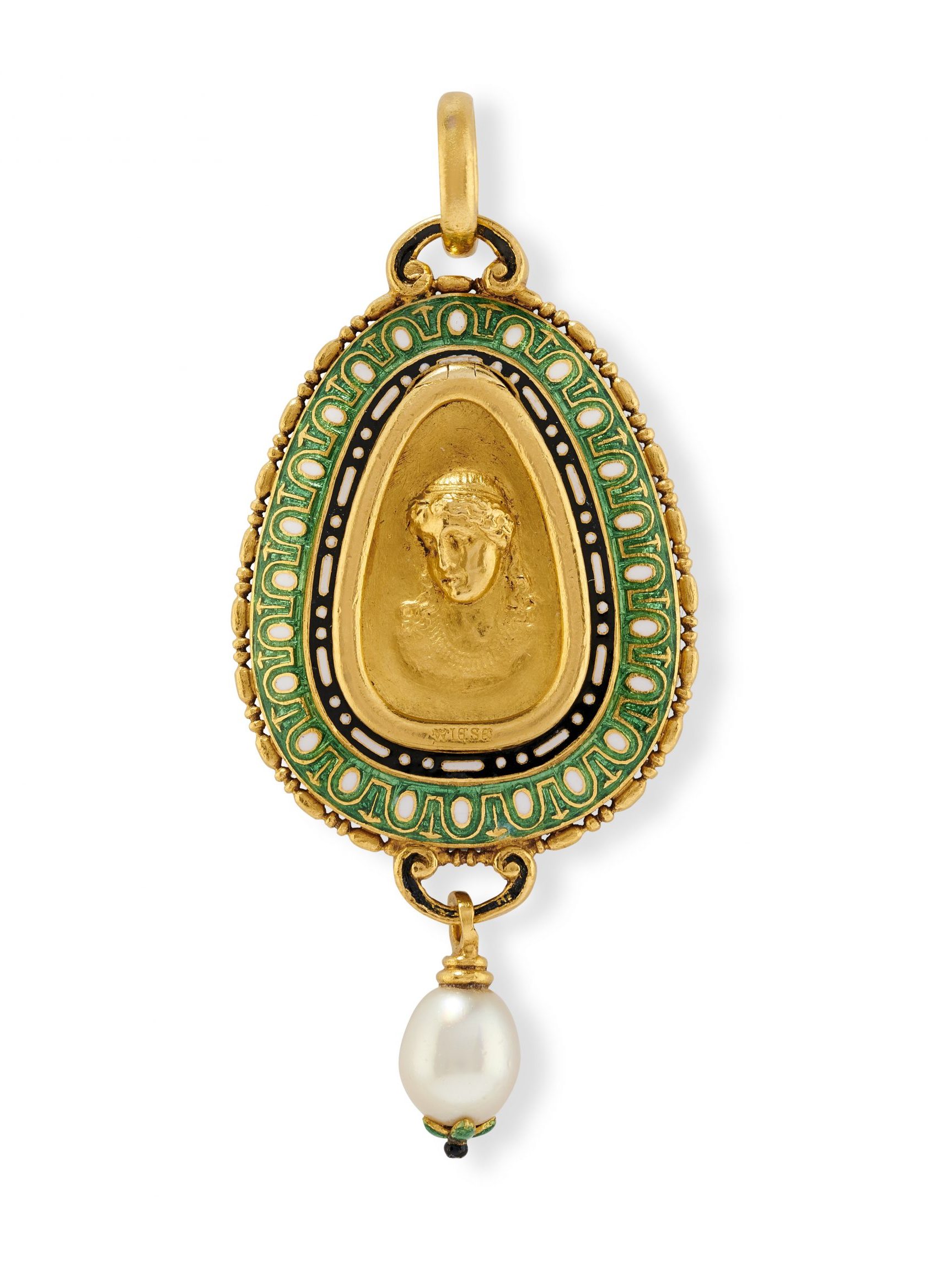 The design of this jewel is based on a Renaissance pendant, once part of the cabinet of King Louis XIV, that resides in the Bibliothèque Nationale in Paris. It contains a sardonyx cameo portrait thought to depict Mary Stuart as Queen of France and is decorated with black and white champlevé enamel which is identical to that which adorns this pendant.

The Renaissance jewel was illustrated twice during the late nineteenth century, in two influential histories of gems and jewellery. In 1887, the pendant appears as an illustration in Eugene Fontenay’s book ‘Les Bijoux Anciens et Modernes’ on page 199 and again in 1894 in ‘La gravure en pierres fines, camées et intailles’ by Ernest Babelon on page 276.  It is likely Wièse developed his own design from these engravings, perhaps prompted by the acquisition of a Renaissance cameo which apparently depicted the same subject as the jewel in the Bibliothèque Nationale. 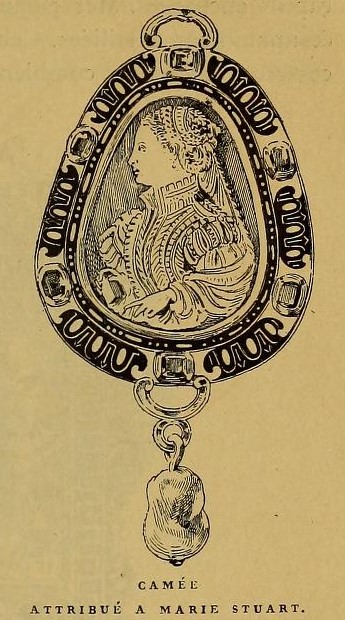 The chased gold portrait of a Classical maiden on the reverse, wearing a luxurious fringe necklace and tainia, is derived from an engraved gem formerly in the collection of Prince Stanislas Poniatowski, which bears the erroneous signature of Dioskourides. The subject of the gem is uncertain; some identify her as the goddess Venus, some as Isis and some as Zeus’s lover Io. During the nineteenth century, the intaglio was considered a great treasure from the ancient world and was believed to have been discovered in 1756 on the estate of the Duke of Bracciano. Wièse is most likely to have known it as a plaster impression. The firm of Wièse was established in 1845 by Jules Wièse (1818-1890), a German goldsmith who had moved from Berlin to Paris and had worked for jewellery firms J-V Morel and Froment-Meurice. It was first located at rue Jean-Pain- Mollet. Wièse sought the finest craftsmen to employ in his studio, such as Emile Philippe and Léopold Hubert, both of whom would become notable goldsmiths in their own right. He trained his son Louis, who took over the running of the firm in 1880.

Jules received many notable commissions, including one in 1855 from Napoleon III for a casket in which the famous talisman of Charlemagne was to be kept and placed in the Palace of Saint-Cloud. Wièse was also commissioned by his native city of Autun to fashion a golden presentation sword to be gifted to Marshal MacMahon in 1860. Wièse participated in the Paris Exposition of 1849 as a contributor to the presentation of Froment-Meurice, for which he won a medal. He exhibited under his own name in the exhibition of 1855, where he received a gold medal.

M Magne, wrote of his work in 1855 “the importance of his pieces and his brave experiments reveal, even in the most modest work, an awareness of art and beauty which deserves to be encouraged by the jury.” Jules also exhibited at the London Exhibition of 1862 where he won another gold medal, as well as the Paris World Exhibition of 1867, where he displayed a series of jewels in the archaeological taste.

Henri Vever described Louis Wièse as a “truly talented artist” who continued to make the finest jewellery in the same tradition as his father.