An Enamelled Gold and Gem-set Photograph Frame by Hahn 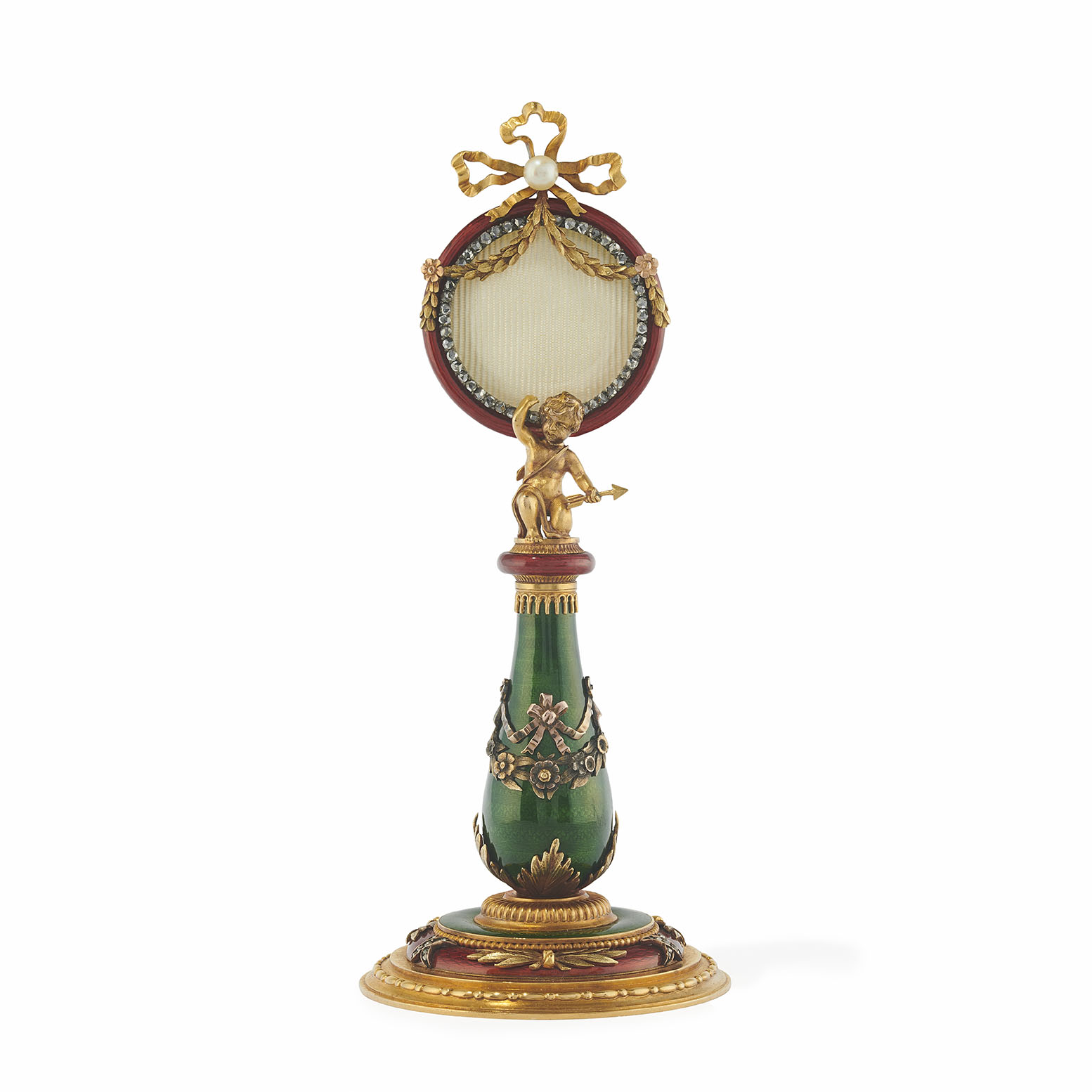 The frame is an allegory to love, supported on the shoulder of Cupid who brandishes one of his arrows. The garlands of laurel leaves which are draped over the aperture are symbolic of Virgil’s famous expression ‘amor vincit omnia’ (love conquerors all).

Malcolm Forbes, of the eponymous publishing fortune, is famous for creating one of the largest and most important collections of Russian works of art, which included nine Imperial Easter eggs and over two hundred individual objects by Carl Fabergé and contemporary Russian goldsmiths.

The frame is illustrated on page 137 of ‘Jewels of the Tsars: The Romanovs and Imperial Russia‘ written by Prince Michael of Greece (Scriptum Editions, 2006).

The firm of Hahn was established by Karl August Ferdinand Hahn, an Austrian by birth, in 1873. He became an important supplier to the Russian Imperial court, appointed a purveyor to the court of Emperor Alexander III. In 1896, he was appointed an appraiser to the Imperial Court. This role meant that Hahn was one of few official supervisors on court commissions and was granted permission to use the state coat-of-arms. The presentation objects commissioned by the Imperial Cabinet to award ministers of state, diplomats and heads of state were completed by one of the court appraisers. They would also supervise repairs and alterations to the Imperial regalia. Carl Fabergé was appointed an appraiser in 1890 and held the position until 1917. Karl August Ferdinand Hahn was an appraiser from 1896 until 1903. His son Dimitri held the position from 1904 until the firm closed in 1911 with the death of his father. The role was then held by the firm’s chief work master Carl Blank from 1915 until 1917.

Among the commissions completed by Hahn for the Imperial Cabinet between 1894 and 1911 were numerous diamond set presentation boxes, maids of honour insignia, and orders. They were also commissioned to make the Coronation crown of Empress Alexandra Feodorovna, at a cost of 76,200 roubles.

Carl (Karl Karlovich) Blank served as chief workmaster to Hahn from 1882 until 1909 and then as a partner with Hahn from 1909 until 1911. Blank then established his own business, continuing to serve as a supplier to the Cabinet until 1917.