An Enamelled Charger by Fernand Thesmar 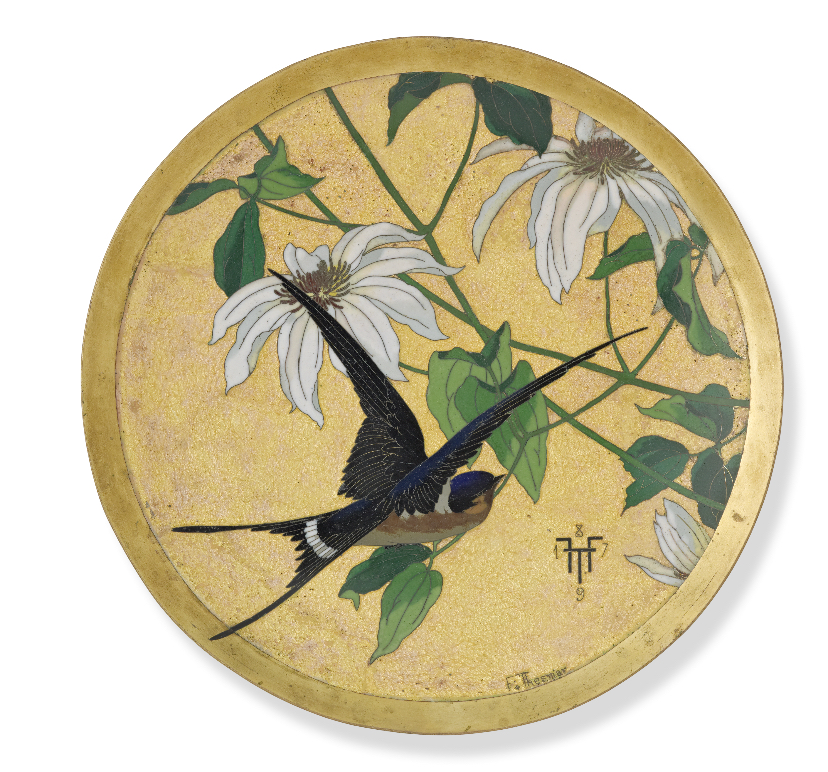 a copper plate of circular form, the surface decorated with gold foil heated to achieve a rich molten finish overlaid with translucent enamel, decorated with a swift and stems of clematis in cloisonné enamel.

Fernard Thesmar (1843-1912) was apprenticed at the age of 14 to a textile printing firm, in order to learn industrial design, his master there was a specialist painter of flowers and he was trained to ‘draw and dissect the plant with passion, forcing him to analyse the forms anatomically and copy nature meticulously.

Thesmar embarked on his metalworking career in 1872 as a designer in the enamelling workshop which Ferdinand Barbedienne (1810-1892) had established alongside his bronze foundry business. Like many of his contemporaries, Barbedienne had been captivated by the Japanese cloisonné enamels he had seen in Paris and indeed owned a considerable collection of them. The large scale pieces he produced in his enamelling workshop were therefore similarly decorated and inspired Thesmar to experiment his first such work at the International Exhibition in Vienne in 1873.

Refining the technique, he succeeded in achieving graduations of colour and reducing the number of cloisons. The two panels he exhibited under his own name at the Exposition Universelle of 1878, ‘Spring’ and ‘Autumn,’ were deemed so sophisticated by the Japanese Government’s Commissioner that they were acquired for the Tokyo National Museum established in 1872, indicating that such technical prowess was unprecedented in Japan at the time.