An Art Deco Onyx and Diamond Brooch by Marzo 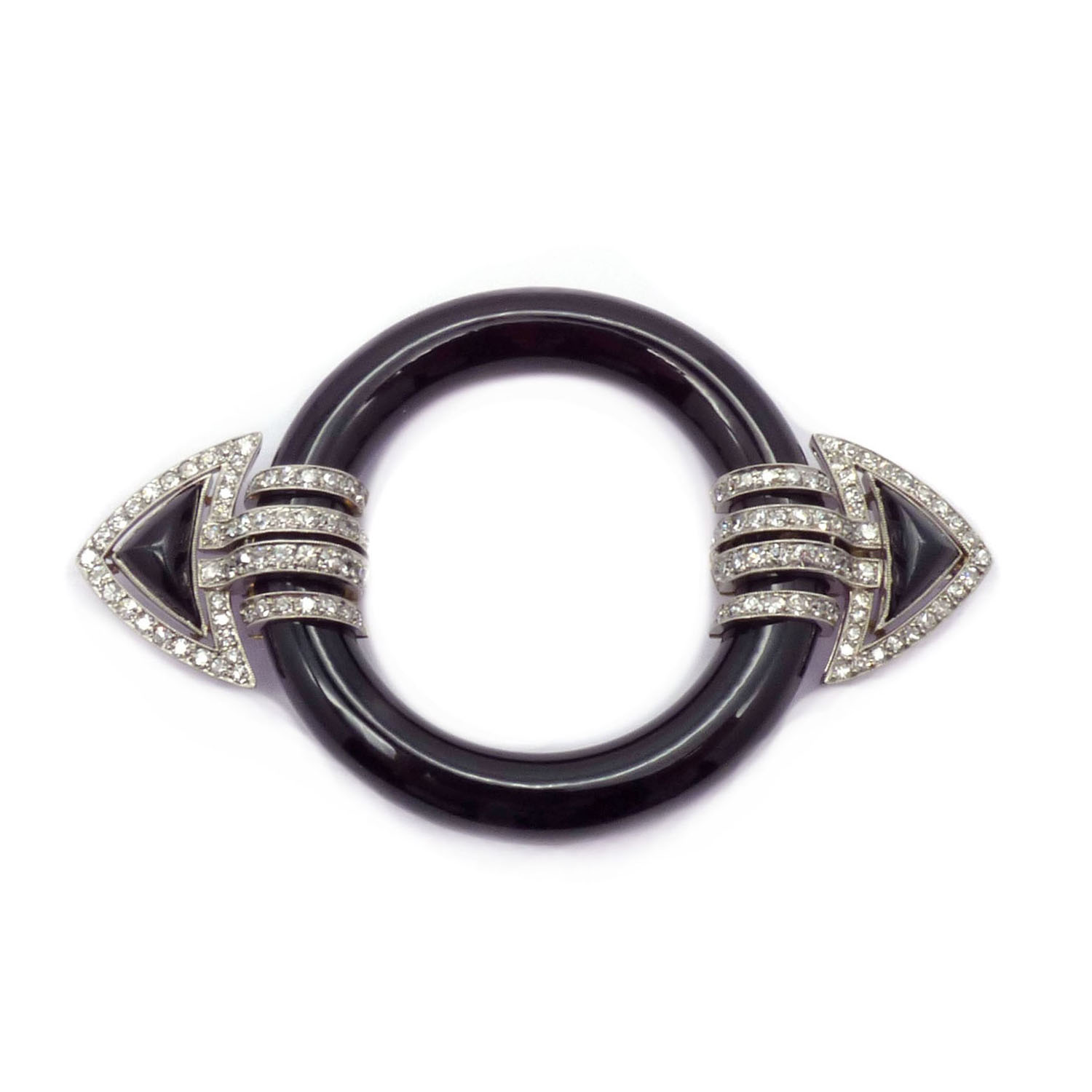 comprising of a polished ring of black onyx, bound on opposing sides with four bands of diamonds mounted in platinum, flanked either side with stylised arrowhead terminals with triangular black onyx cabochons surrounded by diamond borders, a patented white gold brooch mechanism to the reverse.

Francisco Marzo was a Court jeweller and goldsmith  responsible for lavish wedding gifts to the consort of King Alfonso XII of Spain when he married in 1878.  These included a royal diamond-set crown decorated with heraldic motifs, a pearl set necklace with earrings en suite, while the Queen commissioned a sword with a magnificent hilt for the King.  Marzo also supplied the jewellery for the King’s second marriage.  Francisco Marzo died in 1891 whereupon his business was dissolved, however for several years previously he had formed a partnership with the jewellers Garcia and Flores.  It was probably during this period that Lorenzo Marzo, Francisco’s nephew, became acquainted with the processes of jewellery manufacture, and this training equipped him to become a jewellery craftsman when he moved to Paris in 1892.

He finally set up his own business in 1901, establishing himself at 207 rue St. Honoré, registering his mark on 6th July (the initials LM flanking a pair of pliers).   On 3rd May 1911 he formed a ten-year partnership with Laillet and they opened premises at 22 rue de la Paix, under the banner Laillet et Marzo.  There they sold elegant gem-set jewellery and when the association ended he remained at the rue de la Paix.  His display at the 1925 Exposition des Arts Décoratifs won him a Grand Prix.  Pierre Contreau, commented on his display, praising his use of blued steel combined with precious stones.

Two years later, in 1927, he was awarded the Légion d’honneur.  The accompanying document reveals Marzo had branches in Madrid and Havana, although he is also known to have had a branch in Biarritz, a seaside resort much favoured by the Spanish Royal family.  The visits there and to the Paris branch by the Spanish King and Queen were recorded in the daily newspapers such as ‘Le Matin’, writing in 1926 and 1927 that the Queen was visiting ‘son joaillier attitré’ and made several purchases there.  In 1928 it was reported that the King was visiting ‘son bijoutier habituel’ in Paris.

His son Rafael continued to make gem-set jewellery, moving in 1934 to 120 Champs Elysées under the name ‘Marzo et fils’.  Rafael died in 1958 whereupon the firm moved upstairs to 27 rue drouot in 1959.  The firm is recorded in 1966 under Marzo, selling watches, jewellery and gemstones.