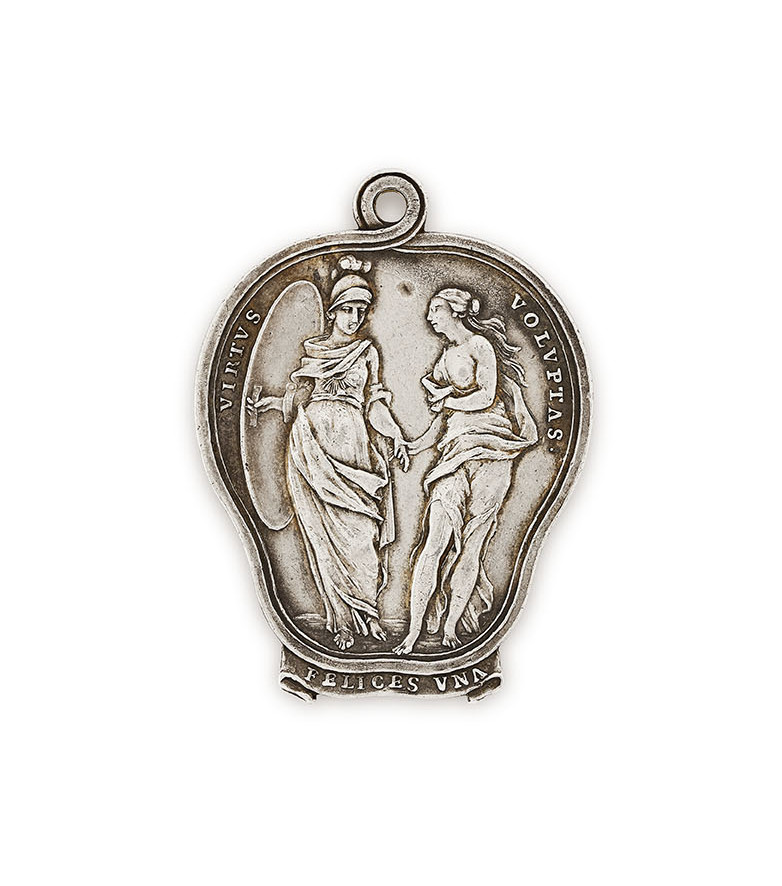 comprising of a silver shield with reeded border and suspension loop, depicting the helmeted figure of Virtus (Virtue) with a shield, holding the hand of Voluptas (Pleasure) in flowing garment, with the legend ‘Felices Una’ (happy one) beneath.

The reverse engraved with the name ‘Thos. Thomas’ and numbered 465.

Thomas Thomas is thought to have been a relative of Jonathan Tyers and is listed among the known subscribers of season tickets for the garden. Other subscribers included Frederick, Prince of Wales, the Dukes of Devonshire and Bedford and the musician George Handel.

The Vauxhall Pleasure Garden was the greatest spectacle of 18th Century London and a space where the rich and famous would often retreat for social entertainments. The gardens first opened to the public in 1660, but it was not until Jonathan Tyers (1702-1767) redeveloped and reopened the gardens in 1732 that they became so famous. The 18th Century writer John Barrell wrote in The Times Literary Supplement that:

“the gardens grew into an extraordinary business, a cradle of modern painting and architecture, and … music.” Famous actors and musicians of the day would regularly perform to audiences in the pavilion. In 1749, a rehearsal of Handel’s composition for the Royal Fireworks held in the garden drew an audience of 12,000 people and the regular fancy dress balls organised by Tyers always had the finest entertainments.

To enter the gardens, visitors were asked to pay an admission. Tyers ingeniously introduced Season Tickets for regular visitors, which could be renewed annually. The value of the silver for tickets was said to be three shillings and intended to stop the production of forgeries.

The design of the Season Tickets varied each year. According to an article by Warwick Wroth written in 1898, the designs were attributed to William Hogarth (1697-1764) as well as the gem engraver and medallist Richard Yeo (c.1720–1779), who was an early member of the Royal Academy of Art. The British Museum hold the gold Season Ticket which belonged to William Hogarth and provided him with a life long entrance to the garden. It was presumably a gift from Jonathan Tyers to thank Hogarth for his help in re-stablishing the garden. Hogarth’s ticket is identical in design to this example:

Examples of other designs can be found in the British Museum, The Museum of London, The Victoria and Albert Museum and the Garden Museum in Lambeth. Few examples appear to have survived and they are seldom seen outside of a museum setting.