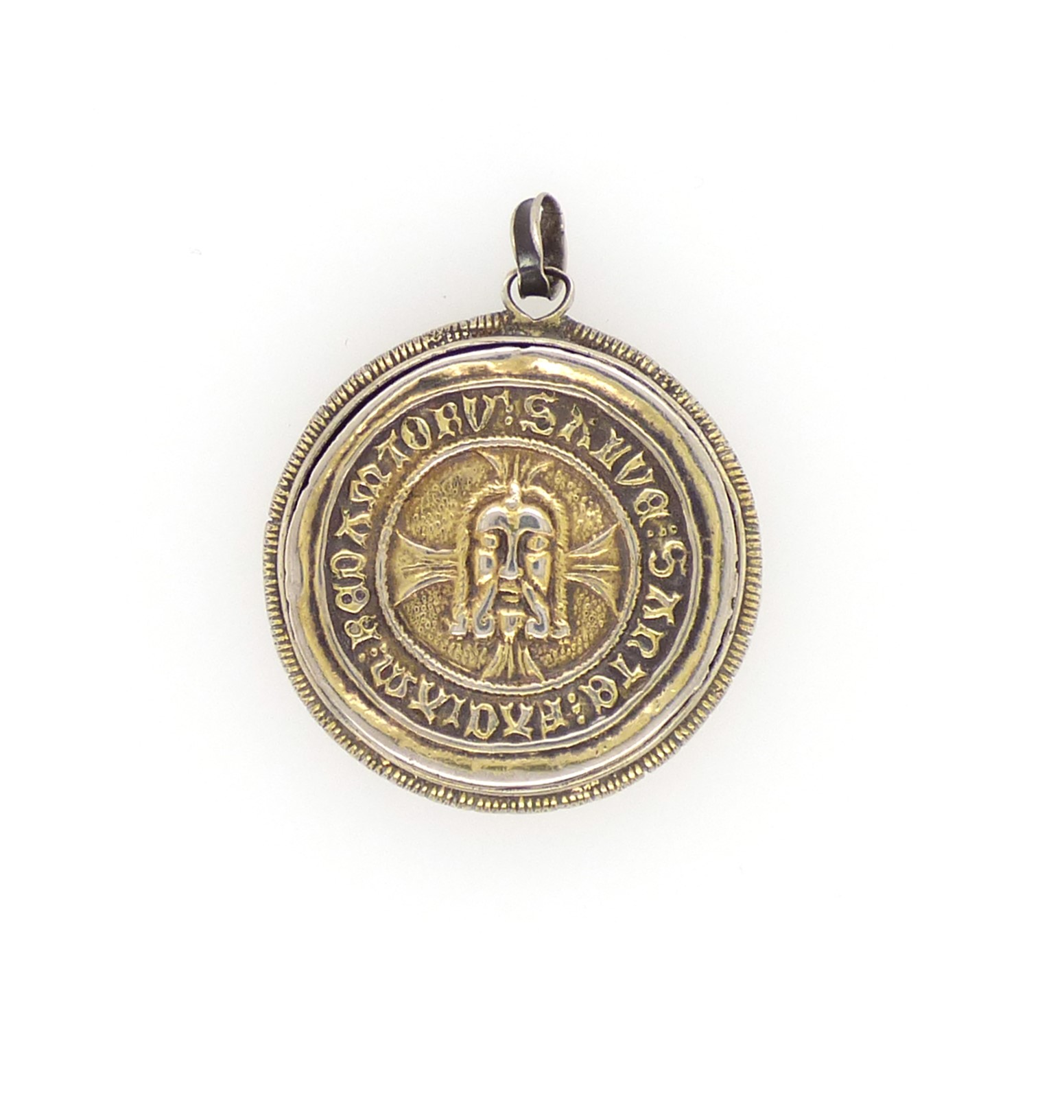 of circular shape, one side embellished with a ‘vernicle,’ the face of Christ surrounded by a halo composed around a cross, a black letter inscription running around the edge which reads ‘Salve san[c]te facies nostris rede[m]ptori[s],’ which translates as ‘Hail, the holy face of our redeemer.’

The other side of the compartment imprinted with the Agnus Dei, a lamb with a crucifer and flag, the inscription ‘agnus dei qui toli peccati mundi’ running around the outer edge, which translates as ‘Lamb of God, who takes away the sins of the world.’

Inside the compartment is an intricate flower shaped design in red fabric, creating compartments within which sit small fragments of saintly relics, the centre containing splinters of the ‘true cross.’ Accompanied by a hand written piece of paper which annotates each of the relics, as well as a slither of gypsum to protect them, which in the period was often used instead of glass. 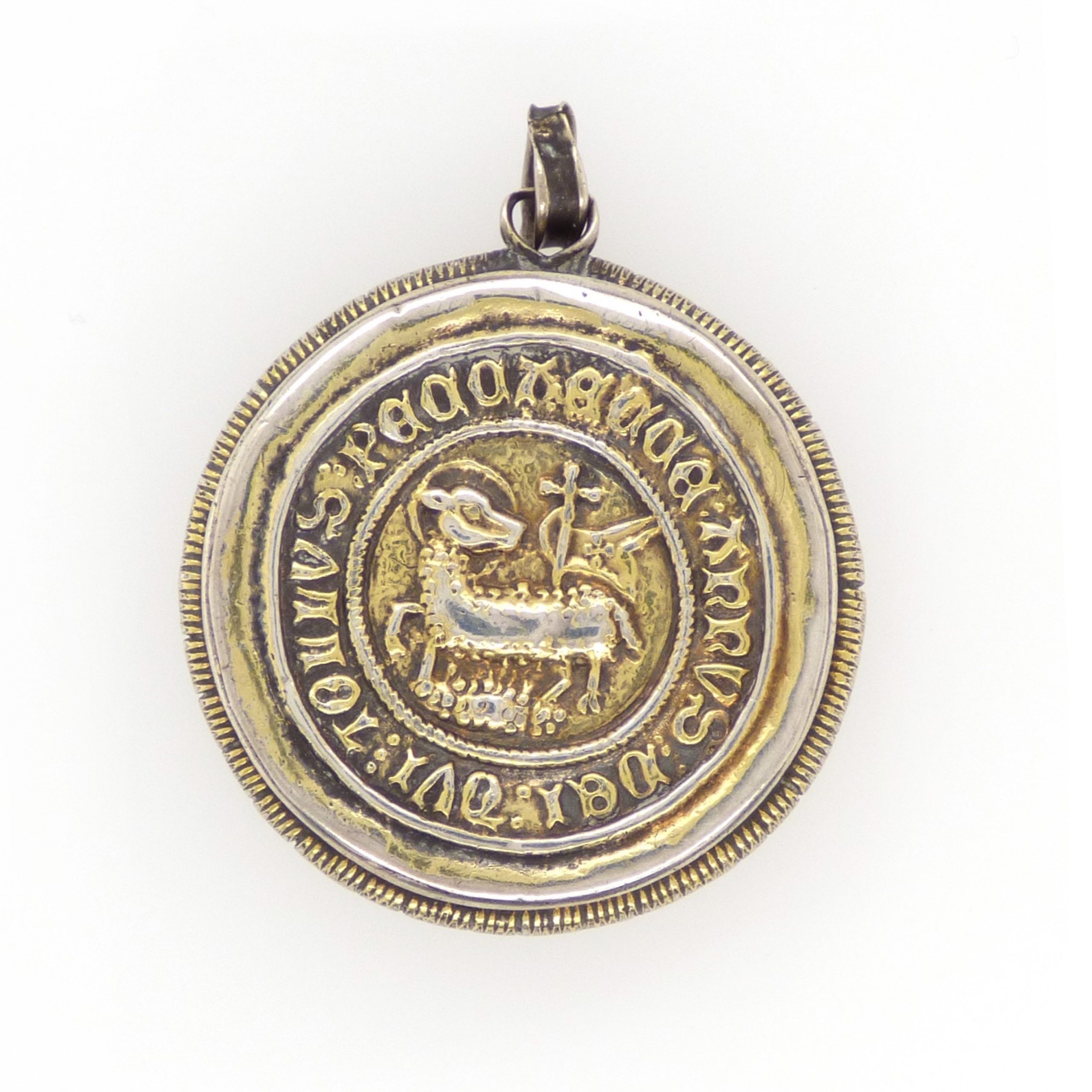 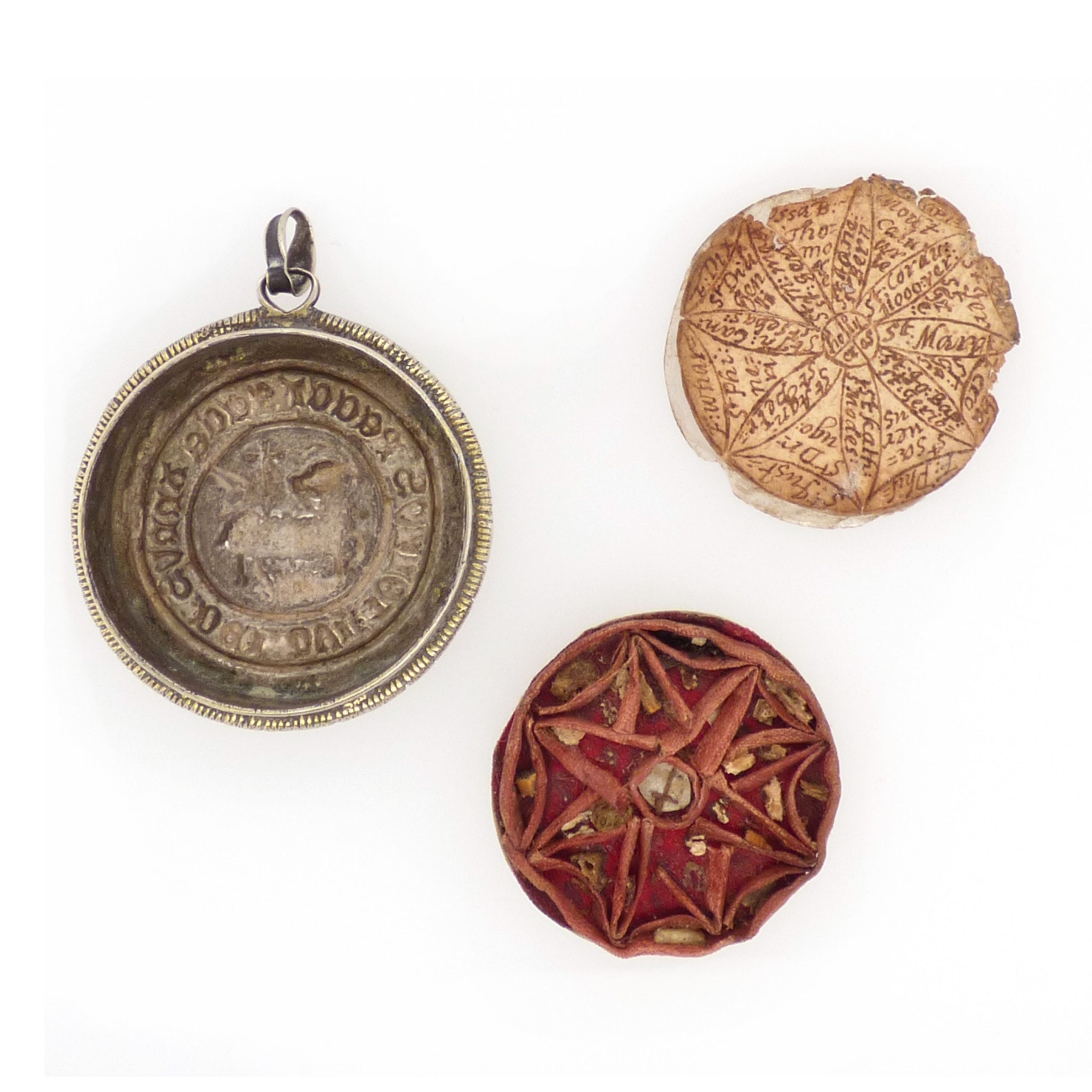 The Museum of London own a brass casket dated to the 15th Century of the same design (Museum no.: 2002.89). The accompanying description, written by medievalist John Clark, explains that the ‘vernicle’ would have served as a souvenir of the Veronica, the veil which St Veronica used to wipe the face of Jesus Christ as he carried the cross. Considered one of the most important relics in the Catholic Church, it resided in St Peter’s basilica. The Latin verse framing the face of Christ, derives from a prayer composed in the 12th Century.

The iconography of the other side, which shows the Agnus Dei, may indicate another function of the casket as Hazel Forsyth, senior curator of the Medieval collection at the Museum of London suggests. It could also have served as a container to hold wax discs made from paschal candles, chrism oil and holy water blessed by the Pope during special ceremonies, known as ‘agnus dei.’ These were incredibly potent sacramental objects which were thought to protect the bearer from storms, pestilence, fires, floods and the dangers of childbirth. Queen Anne of Scotland attributed the safe return of her husband King James VI (after a heavy storm had struck his ship), to her gift of an agnus dei given to him before his journey.

The design which appears on the casket is identical to that which appeared on early agnus dei themselves, as illustrated by a 15th Century pendant in the British Museum (Museum No.: 1902,0527.26), which contains a complete wax example. Given to royalty, nobility and ambassadors by the church, it was common for agnus dei to be broken into smaller fragments and given to members of a recipient’s family to be held in lockets and reliquaries with other relic fragments.

The complex geometric design on the interior of the casket may itself serve an apotropaic function. Similar patterns are seen on the walls of medieval churches, left by workmen and parishioners. They were thought to protect the bearer from witchcraft.