A Sardonyx Cameo Ring of Apollo and Marsyas 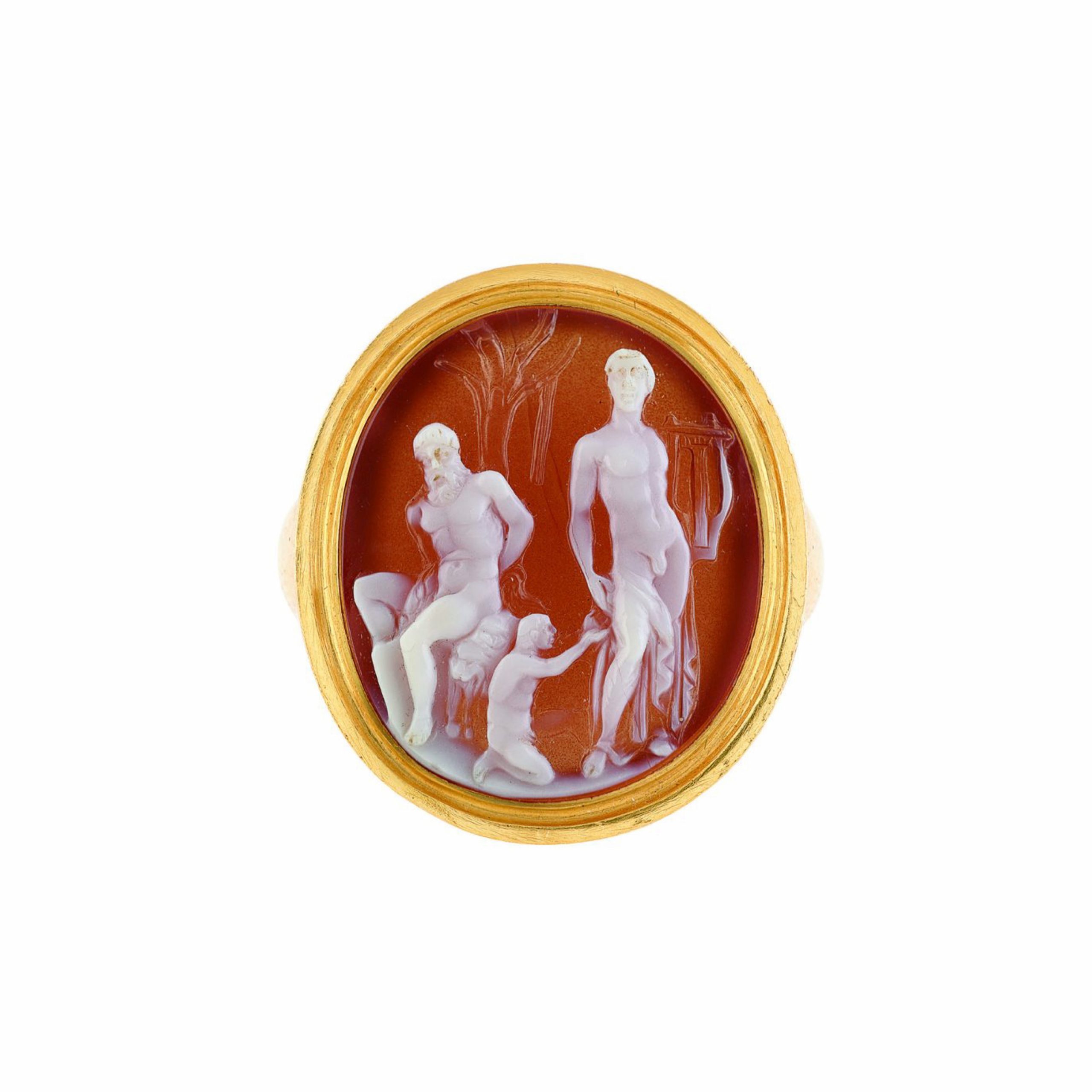 of a circular form, carved in a layered white and spotted pink sardonyx, depicting the god Apollo on mount Tmolus in Phrygia with the satyr Marsyas tied to a tree and Olympus kneeling at his feet. Olympus is raising his hands in supplication, pleading with Apollo to spare the life of Marsyas.

Mounted in an antique yellow gold ring contemporary with the carving.

The scene shows the moment just after the Muses have declared Apollo the winner of a musical competition with the satyr Marsyas and just before Apollo flays Marsyas alive as punishment, pinning his skin to a pine tree. The composition of this cameo is taken directly from one of the most highly prized works of art in Renaissance Florence.

Known as the Seal of Nero, it is an ancient Roman carnelian intaglio of exceptionally fine quality, dating to circa 30BC-20AD, which belonged to Pope Paul II and Lorenzo de’ Medici (1449-1492). The gem was mounted into a ring by the sculptor and goldsmith Lorenzo Ghiberti in 1428, which bore the inscription. “NERO. CLAVDIVS CAESAR. AVGVSTVS.GERMANICVS. P.MAX.TR.P.IMP.PP.”

In the inventory compiled after Lorenzo de’ Medici’s death in 1492, the Seal of Nero was valued at the vast sum of 1,000 florins. In a portrait of Simonetta Vespucci by Sandro Botticelli (circa 1445-1510), she is depicted wearing a cameo copy of the famous gem. Vasari recounts Michelangelo’s role in advising the Medici when making new acquisitions for their art collection, which suggests he will have known the intaglio intimately.

Numerous bronze plaquettes of the gem were produced during the 15th Century, presumably for Lorenzo to present as gifts. Examples can be found in the Metropolitan Museum of Art (No.:1986.319.8), The National Gallery of Art, Washington (No.:1942.9.201) and the Victoria and Albert Museum in London (A.402-1910), amongst others. It is possible that the engraver of this cameo worked from a similar plaquette or impression in the 18th Century.