A Rare Gold Bangle by Christesen of Copenhagen 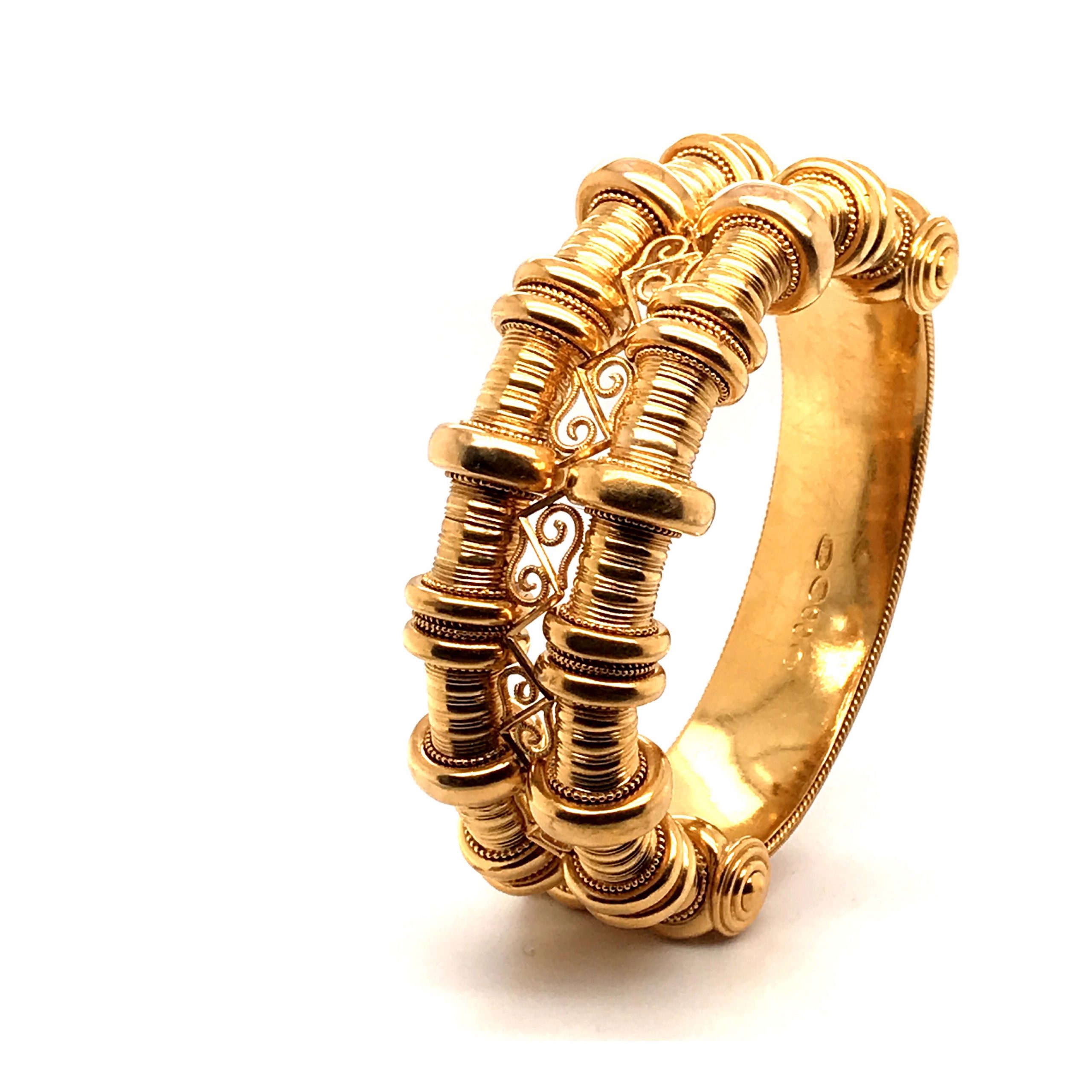 composed of twin rows of gold tubular forms each decorated with vertical reeding and bound at intervals with raised double bands of polished gold each flanked by gold beading, the centre distinguished by its single raised band. The two rows are joined by openwork beaded scrolled motifs, leading to cylindrical elements at each end, one of which conceals the hinge while the other contains the vertical rod which is removed to allow the bracelet to open.

The plain surface of the reverse of the jewel is stamped within with the initials VC for the maker Vilhelm Christesen together with WB (probably one of the manufacturers working for Christesen), as well as the SG Mark for the Assayer Simon Growth (1863-1904), the town mark of Copenhagen consisting of 3 towers, and the 14K gold standard. 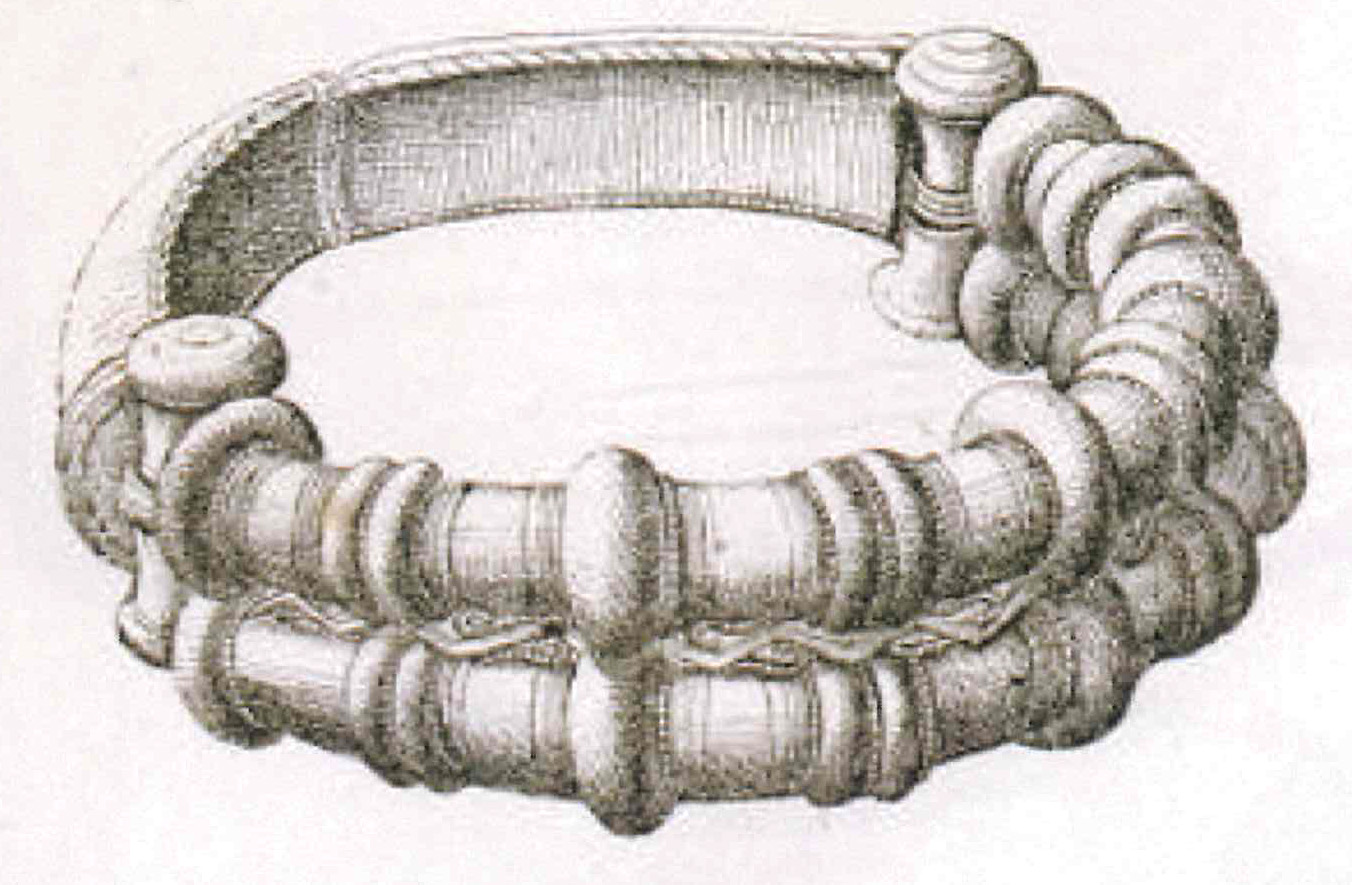 The Dowager Empress Maria Feodorovna of Russia was often photographed wearing what appears to be an identical bracelet (with thanks to Andrew Prince for this discovery). The Empress had been the Princess Dagmar of Denmark before her marriage to the Tsarevich Alexander (the future Emperor Alexander III of Russia) in 1866. 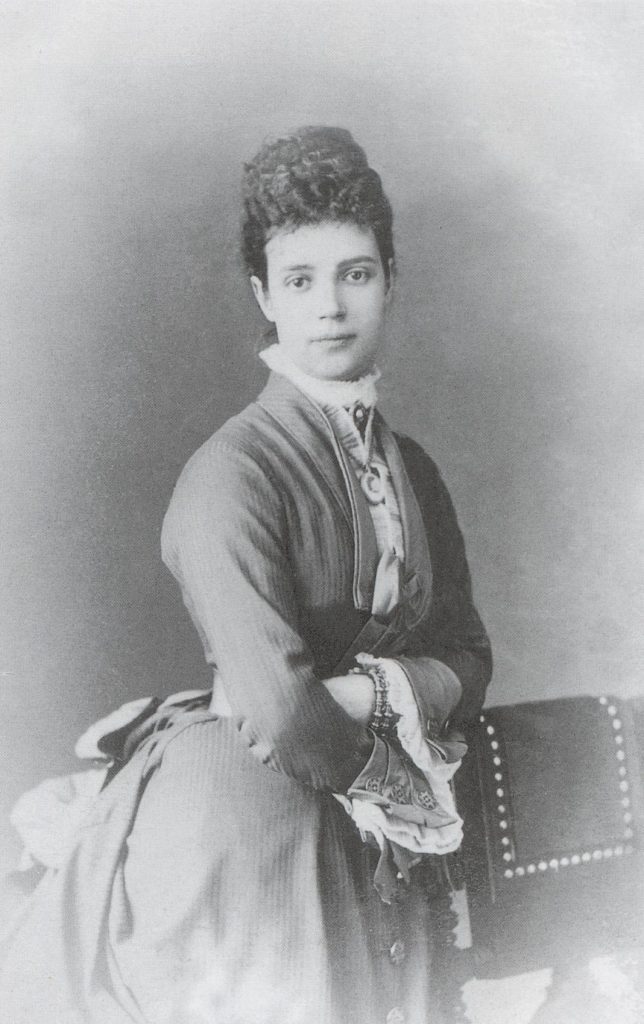 An identical Iron Age prototype for this bracelet was housed in the Royal Museum of Copenhagen and was reproduced as an engraving in Nordic Antiquities. The Royal Museum Copenhagen by J.J.A. Worsaae (first published in 1854 and revised with new finds in 1859). Christian Jugensen Thomsen (curator of the Museum of Northern antiquities since its founding in 1819 to his death in 1865) pioneered the classification of prehistory into the Stone, Bronze and Iron Ages. His assistant Worsaae was the first to introduce stratigraphy in scientific excavation. The clear chronology of periods discussed in his writings, ranging from Bronze Age, Iron Age to Migration Period, the Vikings and the Middle Ages, together with the accompanying high quality engravings, were to be fundamental in promoting the Scandinavian style in jewellery.

The firm of A. Borgen & Co were importers of Danish manufactures and works of art and also the sole agents in England of the Royal Porcelain Manufactory in Copenhagen. Its ‘Royal Danish galleries’ opened on Bond Street in 1869, familiarising a wider public to Danish goldsmiths’ work, and especially that of Christesen and his contemporary Dahl. By that time the firm of Christesen had already participated in the 1867 Exposition Universelle in Paris under its own name and amongst the few examples of jewellery illustrated by The Art Journal of that year is an engraving of a bracelet by ‘Herr Christesen, of Copenhagen, one of the many beautiful works in gold by that manufacturer’ (p.175).

Christesen is also listed in the Official catalogue of the Workmen’s International Exhibition (p.49), held in London in 1870. Exhibited by the London agents Messrs. Borgen, Christesen’s jewellery was much admired and The Art Journal gave it great prominence: ‘The Danish exhibits of jewellery are of the highest merit. The gold of which they are made, though only of 14 carat standard, has a colour superior to the 16ct gold of the English goldsmiths. The designs are for the most part taken from Ancient Norse patterns preserved in the Archaeological Museum at Copenhagen. Some of the ornamental work is in a sort of appliqué filigree, which recalls the revival of the art of the ancient Italian goldsmiths. Other patterns are essentially Norse. [… ] the contrivances for fastening these ornaments as well as the bracelets, are very ingenious. It would seem as if the ancient Danish workers had not only a special traditional Art-training of their own, but a kind of instinctive perception of the laws of harmony and design’ (p267-268).

The firm took part in all subsequent major exhibitions, (significantly, under its own name at the London 1871 exhibition), displaying revivals of traditional peasant ornaments with filigree alongside Archaeological style jewellery. Both styles were purchased by the South Kensington Museum in 1867 and by the Museum für Angewandte Kunst in Vienna in 1873.

For the Exposition Universelle in Paris of 1889, Christesen issued a complete catalogue that revealed the firm’s fertile imagination, including bracelets and diadems that matched Viking and Bronze Age style jewellery that was presented to Princess Alexandra (sister of the Princess Dagmar) on her wedding to the Prince of Wales in 1863.

Being Danish born, the ceremony marked an opportunity for lavish gifts to the Princess in the new national style, and her trousseau contained at least five different gifts of jewellery inspired by Danish antiquities.   The wedding gifts were displayed in their entirety at the South Kensington Museum in 1863 and no less that 5,930 people paid to see them on the first day of opening. Although the gem-set gifts of jewellery must have been a huge draw, this was an opportunity for the Danish style pieces to be seen by an unprecedented number of visitors. The fact that the Princess subsequently patronised Borgen’s Danish galleries must have influenced the tastes of British buyers.