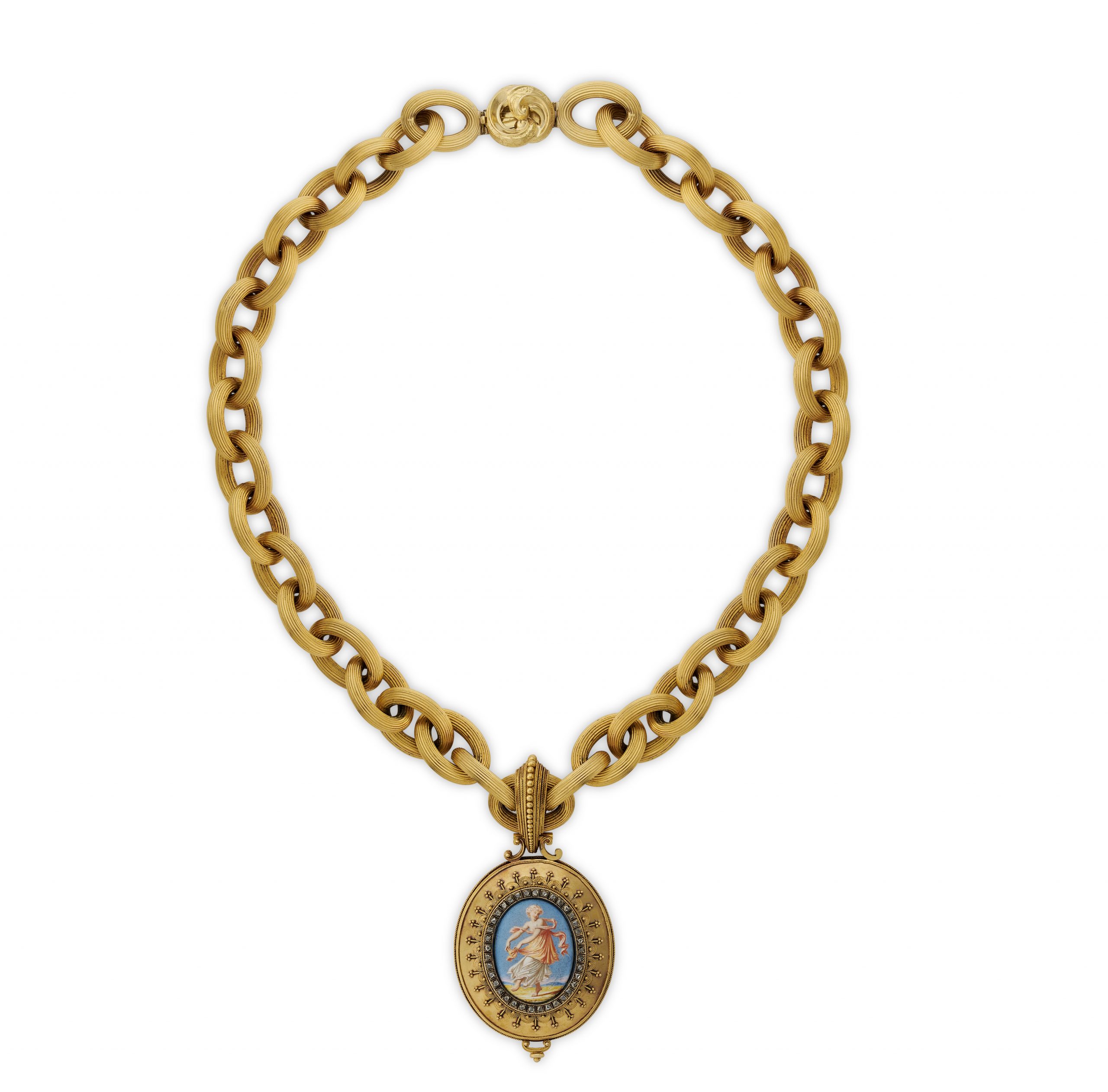 composed as a pendant on its original chainwork, the thirty-six oval yellow reeded gold links suspending an oval locket centred with a painted enamel plaque by Eugène Richet depicting a dancing Classical figure silhouetted against a powder blue background, poised on one foot with her arms outstretched gracefully holding her orange diaphanous veil over her long white tunic;  the enamel is mounted within a diamond-set frame, bordered with twisted wirework semi-circular motifs highlighted with gold beading.

The reverse is centred with a floret applied over a surface of twisted wirework and a border of continuous quatrefoil motifs. The upper hinge allows the lid to open revealing a removable glazed panel to for the private display of a personal memento. 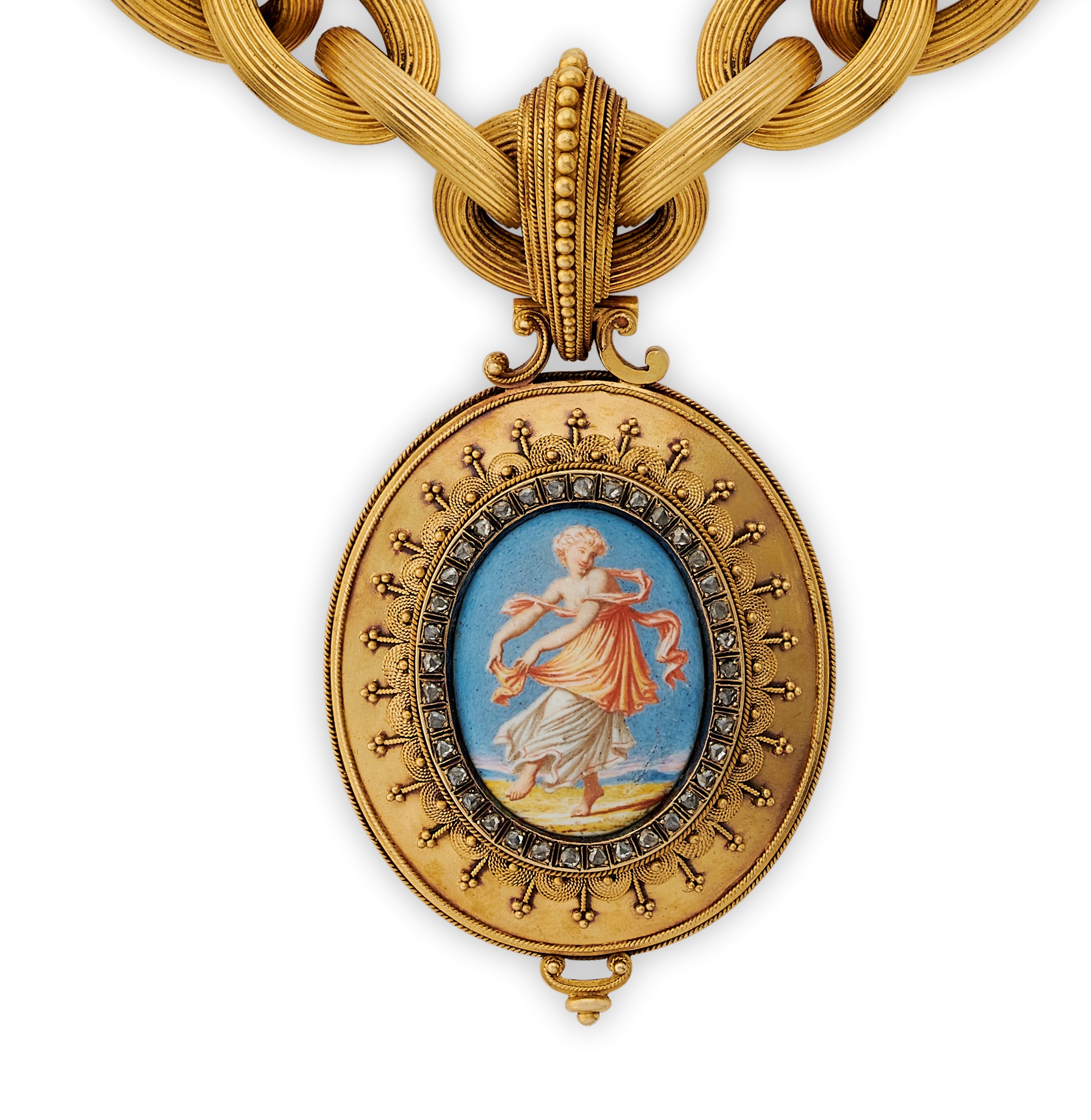 It is for his jewellery in the Archaeological taste that Eugène Fontenay (1823-1887) has achieved lasting renown. The extensive collection of archaeological works of art formed by the Marquis of Campana, acquired by Napoleon III and subsequently exhibited at the Palais de l’Industrie in 1862, would profoundly inspire him during the last two decades of his career.  Consisting of some 10,000 pieces, amongst them were 1,200 examples of ancient jewellery.

The meticulous granulation and twisted wirework with which they were decorated prompted Fontenay to incorporate these techniques into his own creations, which were very personal interpretations of the Greek, Roman and Etruscan jewels he so admired.

A distinction of his jewels was not only their technical refinement and graceful design, but their rich colour of gold.  A large number incorporated matt painted enamels depicting mythological subjects, deities or Maenads carried out by the painter Eugène Richet.

The opaque enamels successfully evoked the dull texture of the mosaics or the frescoes adorning the floors and the walls of recently excavated archaeological sites such as Pompei and Herculaneum. As Fontenay wrote in the foreword to the catalogue of his works presented to the jury before the Exposition Universelle of 1867, where he first exhibited his ‘bijoux étrusques’, ‘The miniature paintings with which several of these jewels are centred are carried out by the delicate and flawless brush of M. Richet, pupil of M. Couture.  Although their colours are vibrant, they do not emit the dazzle commonly associated with enamel, and they are matt throughout. M. Richet is to date the only person I know to have achieved this effect, and he alone holds its secret.’

Richet’s mastery of the technique is demonstrated in the details of the enamel of this plaque, from the exquisite rendering of the drapery to the carefully crafted shadow on the ground.

Archival photographs illustrate Fontenay’s pendants without accompanying chains; several factors indicate this example was conceived to accompany the locket, from the precise match of the richness of the gold, the links that are perfectly proportioned to the suspension loop, and its snug fit around one of the central elements, securing it in position. Its survival appears to be unprecedented and provides new knowledge as to how these pendant jewels were conceived to be worn.