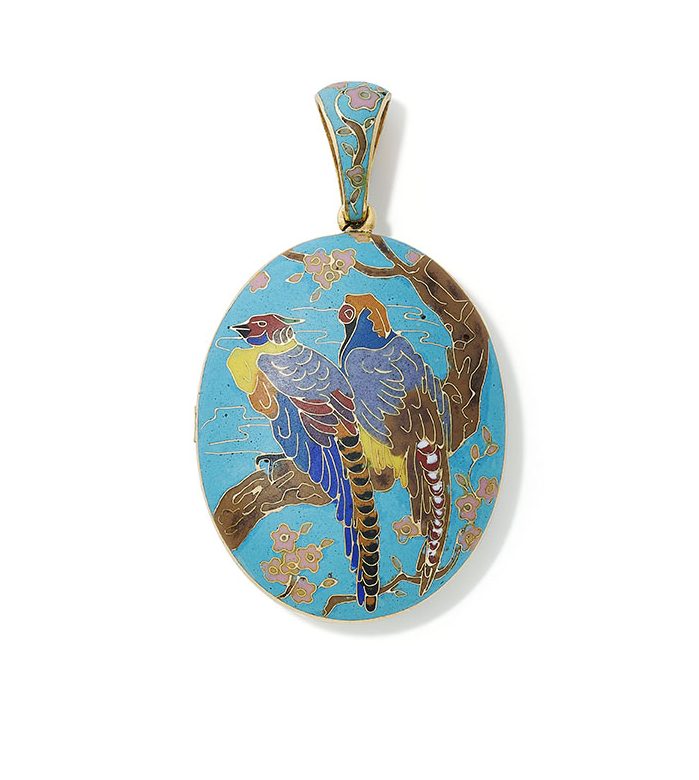 the enamels by Antoine Tard, the oval cover decorated with two vividly coloured pheasants perched on a cherry tree branch against a turquoise enamelled ground, the reverse depicting a rooster and a hen stepping on blades of grass against a cream coloured ground.

The jewel is unusual in being decorated on all four of its faces, the inside panels with two swooping cranes and a duck respectively. Gold wires are used as decorative elements in themselves, depicting grasses at the foot of the scene. The reverse of the loop is enamelled with the letter ‘T’ in black, only the second known instance of Antoine Tard’s initial appearing on a jewel. 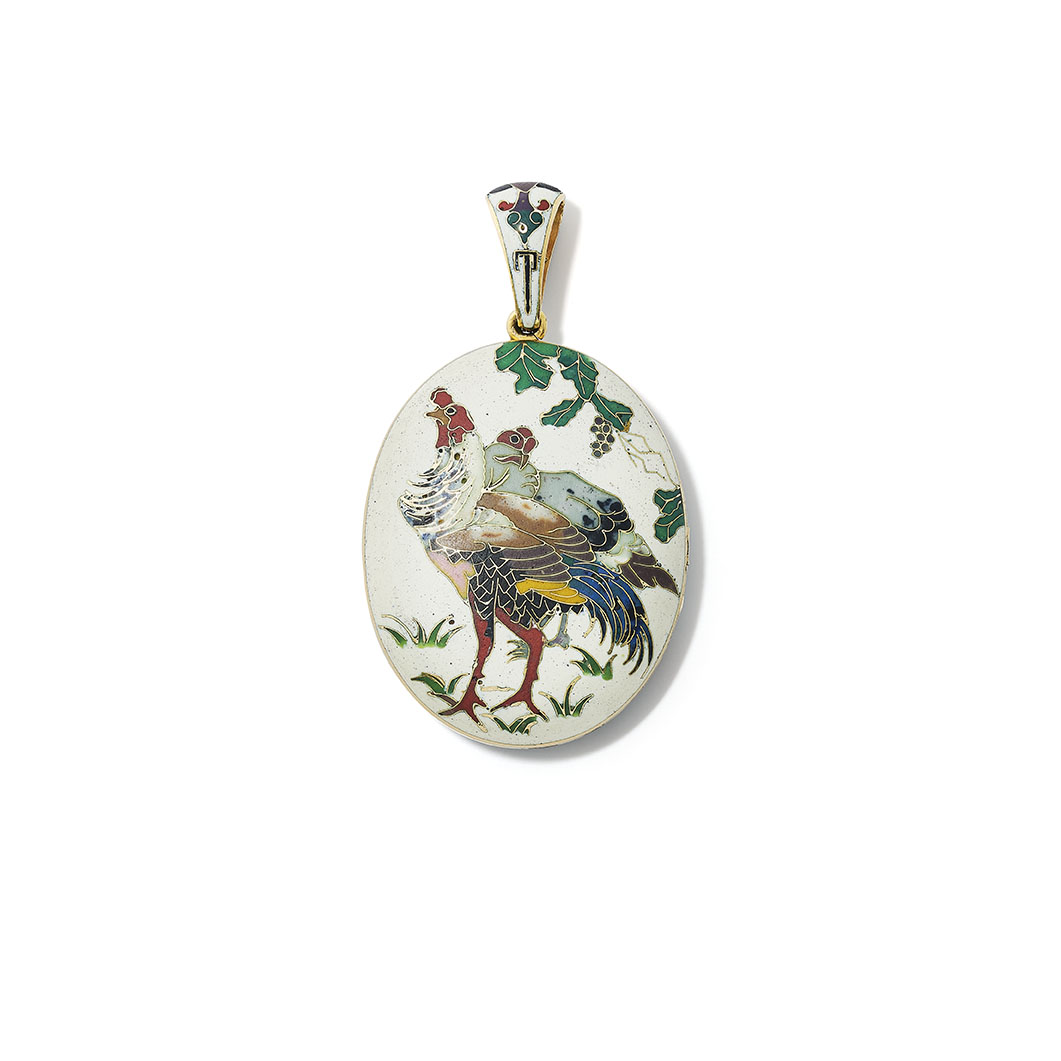 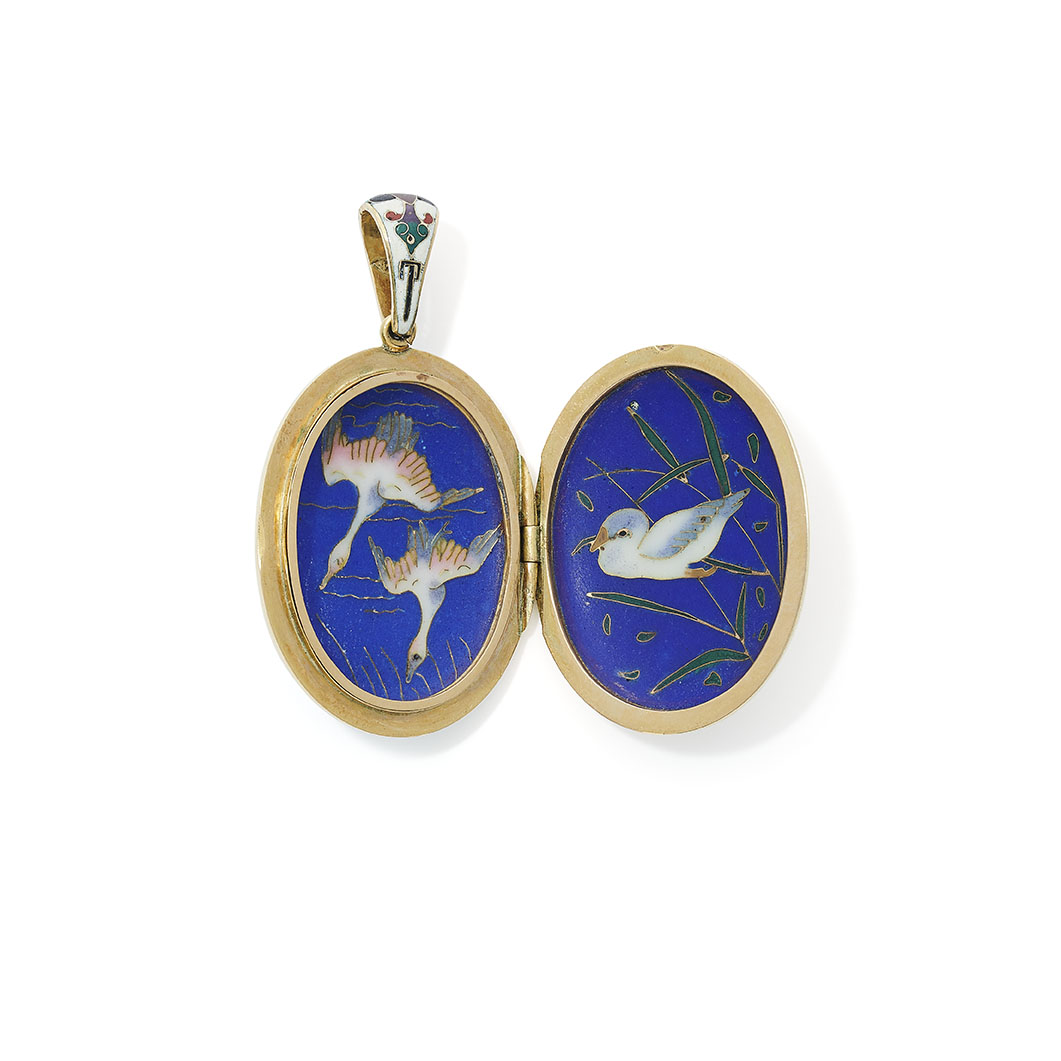 Alexis Falize displayed a large number of his cloisonné enamelled jewels at the Union Centrale des Beaux-Arts appliqués à l’Industrie in 1869, and amongst his pieces was a locket with an identical scene on the front cover, illustrated in Falize: A dynasty of jewelers, Katherine Purcell, 1999, p.105.

This particular depiction of pheasants appears to be inspired from the Japanese encyclopedia, Kinmo zui, Zo-Bo-kin Mo Dzu, published in 1789.

Alexis Falize was familiar with the mass-produced woodblock prints produced by a number of Japanese artists including Kacho sansui zushiki by Katsushika Isai, and  Katsushika Hokusai’s fifteen-volume Manga which contained sketches of a wide range of subjects including flora and fauna.

The jeweller owned fifty such paper-bound volumes before 1871 and a large number of the motifs that decorate his cloisonné enamelled jewels of this period derive from them. Such cloisonné enamelled pendant lockets by Alexis Falize form part of the collections of the British Museum, the Victoria and Albert Museum and the Schmuckmuseum in Pforzheim.

Apart from one other example at the Musée d’Orsay, which is also decorated on four faces, only one other is known in a private collection.

The talents of the enameller Antoine Tard were sought by such firms as Christofle and Boucheron.  The technical excellence of these jewels prompted the South Kensington Museum to acquire such works by Alexis Falize as early as 1867 when they were displayed for the first time  at the Exposition Universelle in Paris.