A Nineteenth Century Cameo Brooch in the Renaissance Taste by George Bissinger and Baucheron & Guillain, 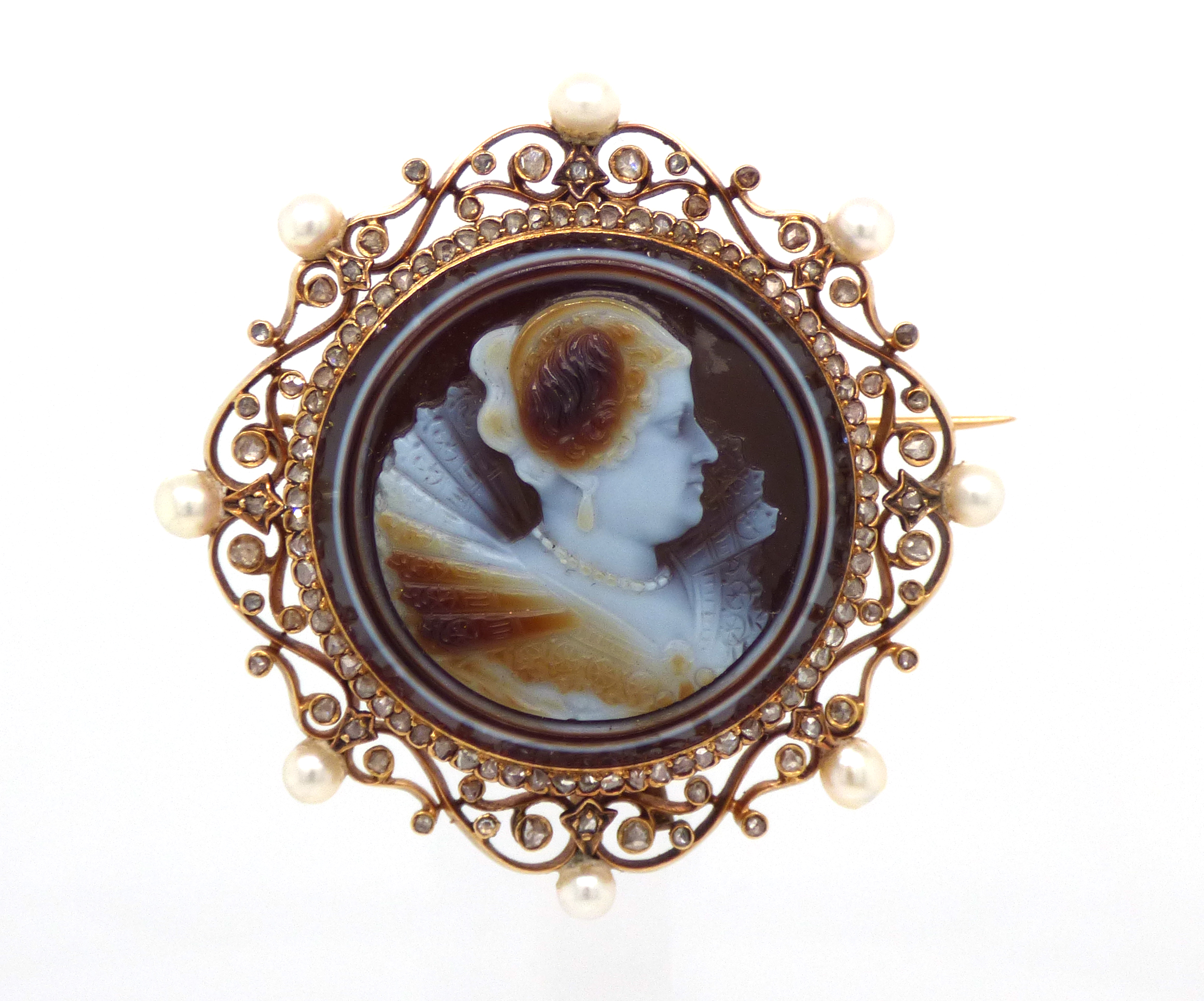 centred with a very fine circular sardonyx cameo depicting Maria de Medici as Queen of France, wearing a stiffened lace ruff and sumptuous jewellery, the cameo is surrounded by an intricately pierced gold border comprising of diamond set scrolls which echo the lace depicted in the carving, the eight intersections embellished with a single pearl. A removable gold brooch fitting to the reverse, which can be detached by removing a gold rod.

The cameo is signed to the reverse ‘G Bissinger’ and numbered ‘1241’.

The brooch stamped with the eagle’s head mark for gold and with the poinçon of Baucheron & Guillain.

Georges Bissinger (1836-1912) was of German origin and settled in Paris. He was awarded a silver medal for his display in the Paris Exposition of 1867 and exhibited in Vienna in 1873 and Philadelphia in 1876. In his report of the 1876 exposition, Lucien Falize noted that Bissinger showed prodigious technical skill, mentioning specifically his mastery of carving lace.

In Bissinger’s display at the Exposition Universelle in Paris in 1878, he presented 112 gems, many taking their inspiration from Renaissiance cameos, coins and medallions from the Cabinet des Médailles. It is almost certain that Bissinger copied this likeness of Maria de Medici from a seventeenth century bronze medal created by Guillaume Dupré (1576-1643), an example of which can be found at the Detroit Institute of Arts (Accession No.: 79.43).

Henri Vever describes the firm of Baucheron & Guillain at length in La Bijouterie Française au XIXe Siècle. They worked for many famous firms in Paris, including that of Frédéric Boucheron and Gustave Baugrand. Louis Baucheron (1826-1905) trained at Marret et Jarry, where his father was workshop manager. He established his own business in 1860 and formed a partnership with Guillain, who had worked for Deschamp. The firm was eventually taken over by Georges Le Saché, who married Baucheron’s daughter in 1877. Vever notes that they specialised in artistic jewellery.