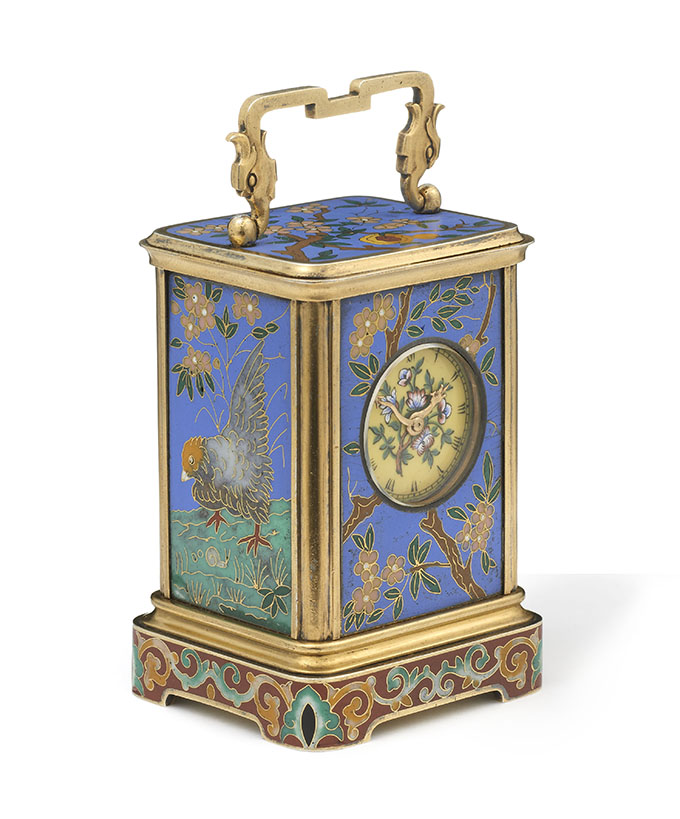 decorated with cloisonné enamels by Antoine Tard
depicting birds and floral motifs in the Japanese taste against a turquoise blue ground,
the base ornamented with motifs of Chinese inspiration against a lacquer-red enamelled ground, the gold handle and clock hands decorated with griffin heads,

Gustave Baugrand (1826-1870) was renowned for his intricate
gem-set jewellery and was a supplier to the
Empress Eugénie as well as other members
of the Imperial family.
By the late 1860’s, the appetite for works in the Oriental taste
evidently led the jeweller to stock such items in his shop.
This clock designed by Alexis Falize was especially commissioned
since it bears Baugrand’s name in gold wirework in the counter enamel of its door,
the highly stylised characters imitating Japanese calligraphy.

Alexis Falize (1811-1898) included several such panels for a miniature
carriage clock in his display of cloisonné enamels
exhibited at the Union Centrale des Beaux-Arts in 1869 (no.341).

Princesse Mathilde, the niece of Napoleon I,
owned a similar timepiece by Falize.
Entitled ‘Petite pendule de voyage’, it was the last item (no.319)
in the posthumous auction of her jewellery which took place in
June 1904 at the Galerie Petit. The jewels were catalogued by contemporary experts including André Falize, the grandson of Alexis.

Other examples of works by Alexis Falize retailed by Baugrand include an early gold, onyx and champlevé enamelled demi-parure in the Petit Palais, Paris.
Its fitted case indicates it dates from c.1852-1864 when Baugrand
was in partnership with Paul Marret, and then his widow.
The design by Alexis Falize is reproduced in Henri Vever’s
second volume of La Bijouterie Française au XIXe Siècle, p.329
(translated edition p.795).