An antique jewelled and enamelled gold brooch by Boucheron. 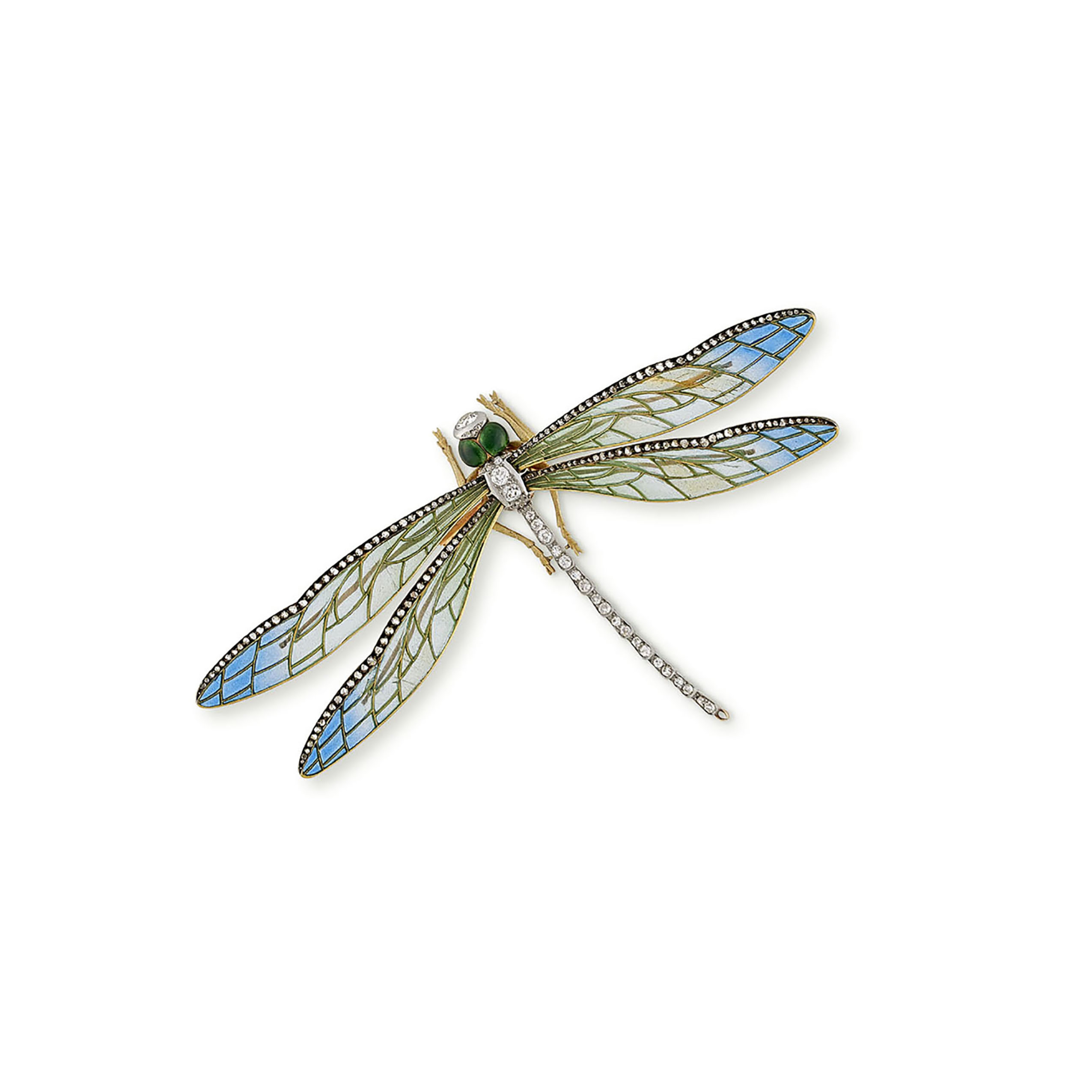 finley modelled in yellow gold as a dragonfly, its plique-a-jour enamel in a graduated palette of blue to green bordered with diamonds and mounted en-tremblant, so that they gently flutter whilst the brooch is in wear,  the thorax and tail set with diamonds, the head of green enamel with a diamond finial.

See ‘Boucheron, Five Dynasties of a World Renowned Jeweller’ by Gilles Néret, page 25 for an identical dragonfly brooch,  dated c.1880-90.  It was exhibited at ‘French Jewellery of the Nineteenth Century’ at Wartski, 2001, no. 155.

A third such example has come to light, forming part of the Metropolitan Museum of Art collection(accession number 2018.447.1, gallery 556) and survives in its original case.  Records refer to the maker as Edgar Bense, a Danish craftsman who supplied jewellery to the most distinguished jewellery retail houses including Lacloche and Boucheron.  Designs for such jewels survive in the archive as early as 1879 and the original brooch fittings were detachable so that they could be replaced with a pin, enabling the jewel to be worn in the hair where the transparency of the wings of the insect could be seen to full advantage.

This present example has lost its original pin, which would have borne the maker’s signature.  Its similarity with the other two brooches, and the unparalleled sophistication of its craftsmanship, make the authorship of the jewel unquestionable.

The technique of plique-à-jour enamel has long been associated with Boucheron.  The enameller Charles Riffault, an accomplished exponent  of the technique, created a number of jewels for the firm that were exhibited at the 1867 Exposition Universelle in Paris. A characteristic of his pieces was the vivid palette of primary colours he used such as Royal blue, red and green, examples of which can be seen in the Victoria and Albert Museum and in the Boucheron Collection.  Framed in pearl-set circular or oval borders for hair pin finials or bracelet panels, they successfully evoke church rose windows. Riffault registered a patent for the technique which was transferred to Boucheron in 1872.  The patent specifically mentions the use of plique-à-jour enamel for the wings of insects. Amongst the pieces singled out in Boucheron’s display at the 1878 Exposition Universelle, for which he was awarded a Grand Prix,  were sumptuous ale glasses in the Persian taste decorated with these enamels.

The technique evidently continued to be used by Boucheron late into the nineteenth century, seen at its most refined when translating the ethereal quality of an insect’s wings.