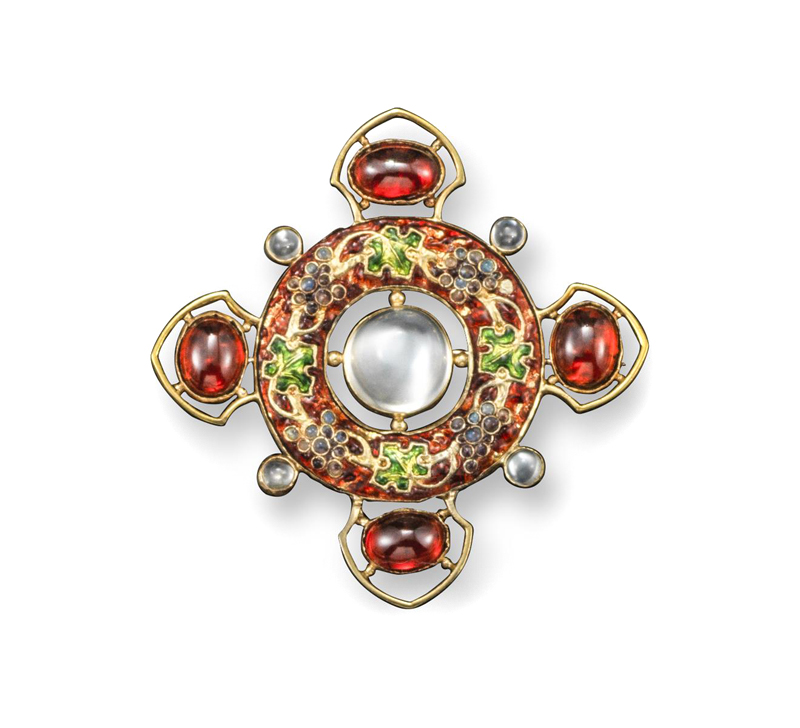 the jewel is decorated with a wreath of vine leaves and grapes in foil backed enamel, with a high domed cabochon moonstone in the centre and oval cabochon garnets. Whilst the shape of the jewel owes a great deal to Celtic design, the palette of the decoration is more redolent of Chinese art.

Watt trained as an architect, later teaching himself metalworking and enamelling, inspired by contemporary artists such as Alexander Fisher (1864-1936) and Phoebe Traquair (1842-1936). He was also a keen botanist, traveller and collector. He assembled an extraordinary collection of Chinese hardstone carvings, porcelain, enamels and bronzes, which are now housed in the Aberdeen Art Gallery and Royal Scottish Museum. The array of vivid colours and the abstract forms which decorate these objects clearly proved a fruitful source of inspiration. So too were the traditional forms and designs which surrounded Watt in Scotland.  In 1911, Watt worked with the English architect and goldsmith Henry Wilson (1864-1934) to complete a bronze tomb to commemorate Bishop Elphinstone, co-founder of the University of Aberdeen. Watt also worked closely with the artist Douglas Strachan (1875-1950), who was famed for his sumptuous stained glass designs and completed two striking portraits of Watt.