A Hardstone Cameo of Paris, mounted in a ring, by Giovanni Pichler, 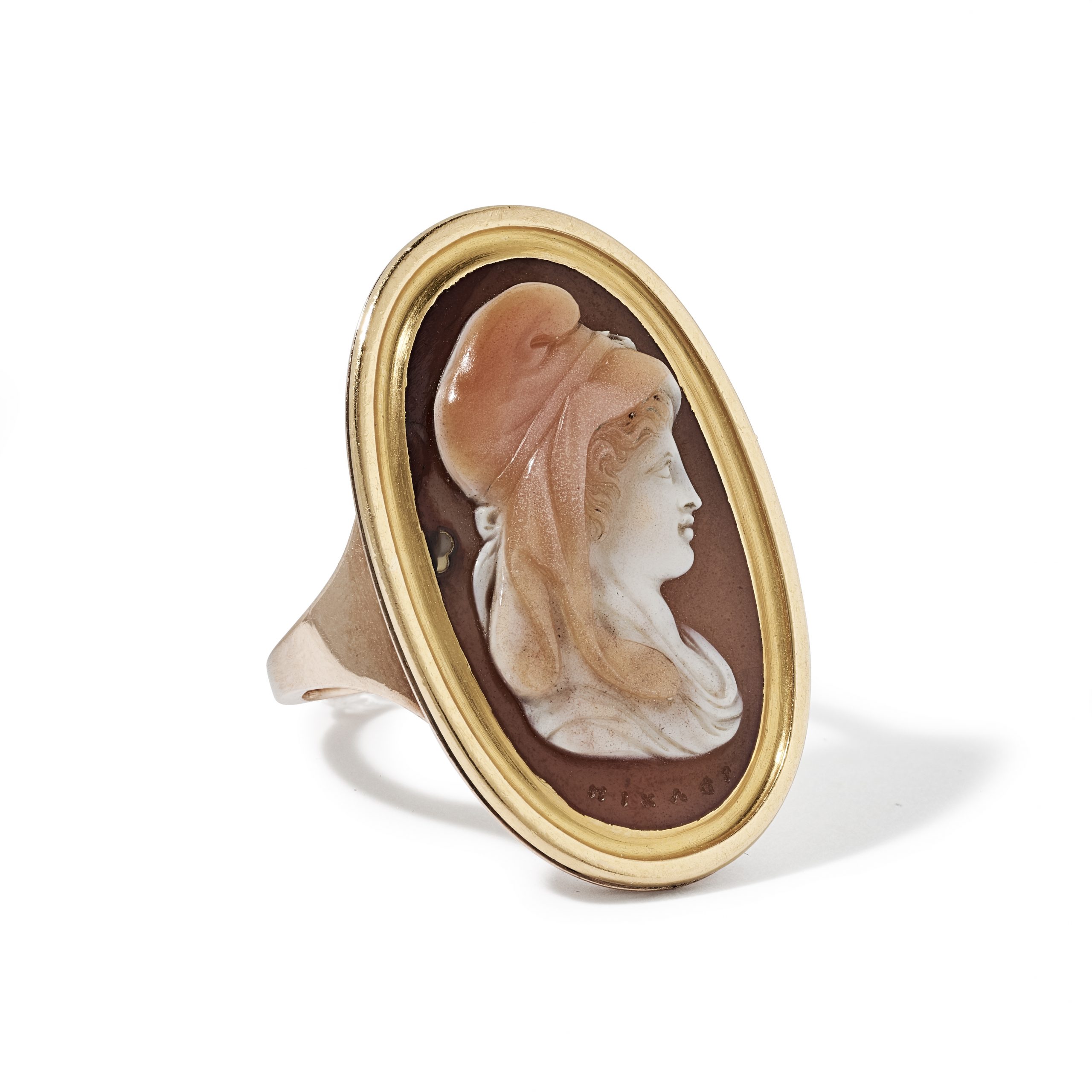 an elongated oval cameo carved in a burnt orange sardonyx depicting an androgynous portrait of Paris (facing right), his flowing hair and characteristic Phrygian cap positioned in an orange layer of the stone illuminated by the white layer beneath, his face and tunic carved in the white layer.

Mounted in an antique gold finger ring in the Classical taste. 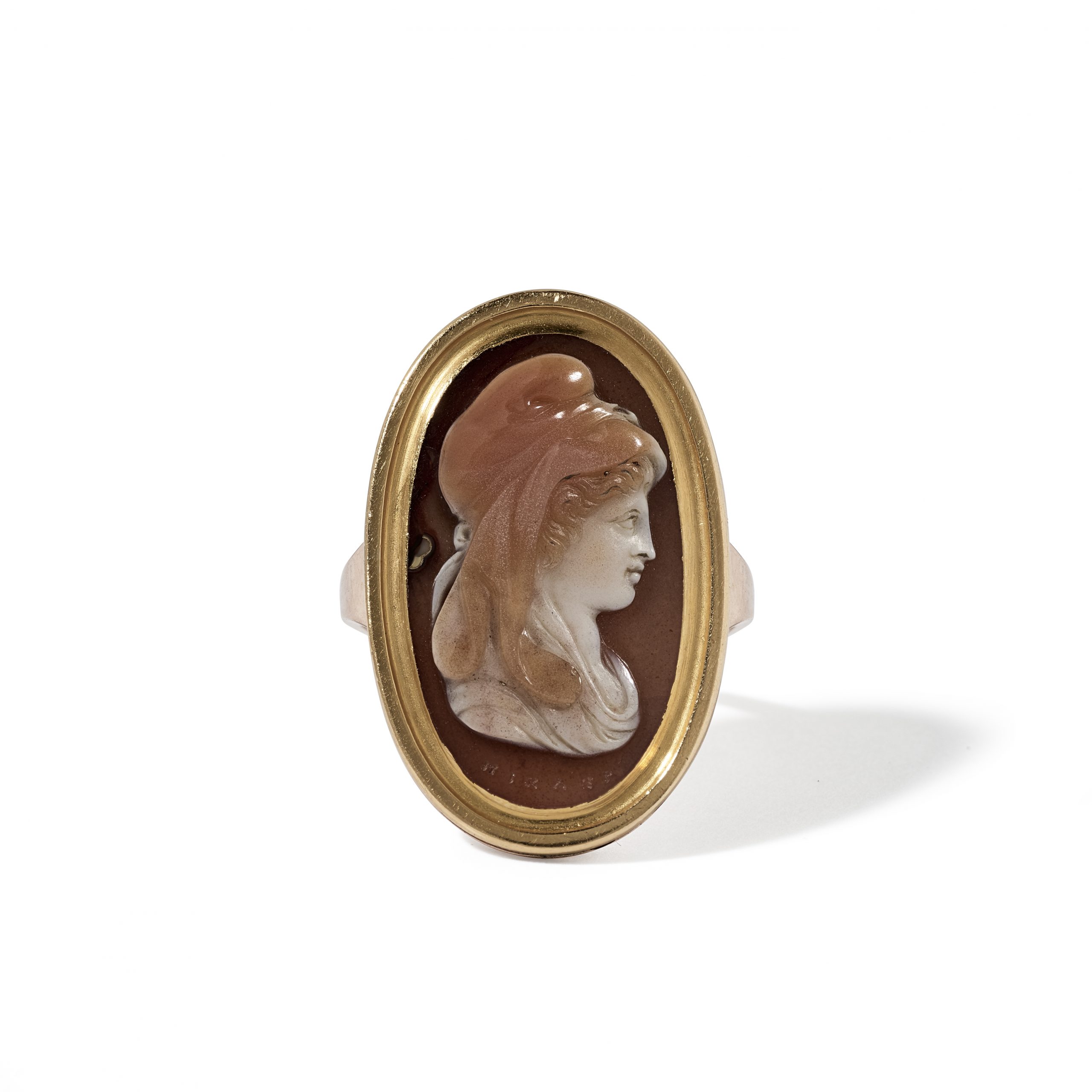 A comparable cameo can be found in the collection of impressions of Bartolommeo Paoletti and his son Pietro. It is reproduced as number 286 in ‘La collezione Paoletti: Stampi in vetro per impronte di intagli e cammei’ (Stefanelli, 2010), volume II, Tomo V, Cassetto 5, where it is described as a cameo of Paris.

Traditionally depicted wearing a Phrygian cap, the shepherd Paris is one of the most famous mortals from Greek mythology, the son of King Priam and Queen Hecuba of Troy.

Whilst she was pregnant with Paris, Hecuba had premonitions of the destruction of the city. The seer Aesacus believed that these premonitions were a sign that the unborn Paris would be responsible for their ruination. He advised the child be killed as soon as he was born. Priam and Hecuba entrusted this act to the shepherd Agelaus, who left the infant on Mount Ida to die. Paris was however kept alive by a wild bear who suckled him. His survival was considered an omen from the gods and Agelaus chose to raise the infant Paris in secret.

Famed for his beauty, intelligence and fair judgement, Paris the shepherd caught the attention of the gods. His impartiality was tested when he was called to judge two bulls at a cattle show. Although one of the animals belonged to Paris himself, he still chose the other (the god Ares in disguise) as the finer beast.

This impartiality would be why Paris was later called by Zeus to adjudicate the conflict between the goddesses Hera, Athena and Aphrodite. During the wedding of Peleus and Thetis, a golden apple was thrown into the crowd by the god of discord, Eris. The apple was engraved “to the fairest” and the three goddesses all laid claim to it. Paris was to decide which of the goddesses was the fairest, eventually awarding the apple to Aphrodite.

Hera, Athena and Aphrodite each promised Paris favours in order to sway his judgement and it is said that Aphrodite vowed to give him the hand of the most beautiful mortal woman. Paris was married to Oenone, the nymph daughter of Cebren. This however did not deter him from abducting the Spartan Queen, Helen, who was considered the most beautiful. It was his abduction of the Spartan Queen which would begin the Trojan wars and fulfil his mother’s premonition of the end of Troy.

Giovanni Pichler was born in Naples on the 1st January, 1734, the first born son of Antonio Pichler and his first wife. The family moved to Rome in 1743, where Pichler’s education was
entrusted to the artist Domenico Corvi, who instructed him in drawing. At the age of 14, he received instruction from his father in gem engraving, whilst continuing to practise drawing and painting, regularly attending the Vatican to copy scenes from Raphael’s friezes and Classical sculpture.

In 1761 he was commissioned to produce a substantial painting for an altarpiece for the Franciscan Church of Orioli. He would also complete a large altarpiece for the Augustinians
in Bracciano. In 1769, Pichler was commissioned to produce a portrait of Emperor Joseph II during his visit to Rome. Whilst intended to be a discreet likeness, taken from behind a screen, the Emperor was introduced to Pichler and was impressed by his work. He appointed him his personal court gem engraver and knighted him as a member of the German guard (although his attempts to persuade Pichler to move to Vienna did not succeed).

In 1775, Pichler contemplated moving to England, as the city of London increasingly became a centre of gem engravers and collectors. However, he and his family only reached as far as Milan. During his time in the city, he completed several works of art.

His studio was considered the most famous in Italy and many travellers on the Grand Tour would visit him to have their portraits taken. He also trained many notable engravers of the early 19th Century, including Filippo Rega, Antonio Berini, Giovanni Antonio Santarelli and Christian Friedrich Hecker.

Several stories of Pichler’s work being mistaken for artworks completed during Classical antiquity survive in accounts, perhaps indicating that he was a cunning self-publicist, as there was no greater compliment to an engraver’s work than it being considered as good as that of the engravers of Classical antiquity.