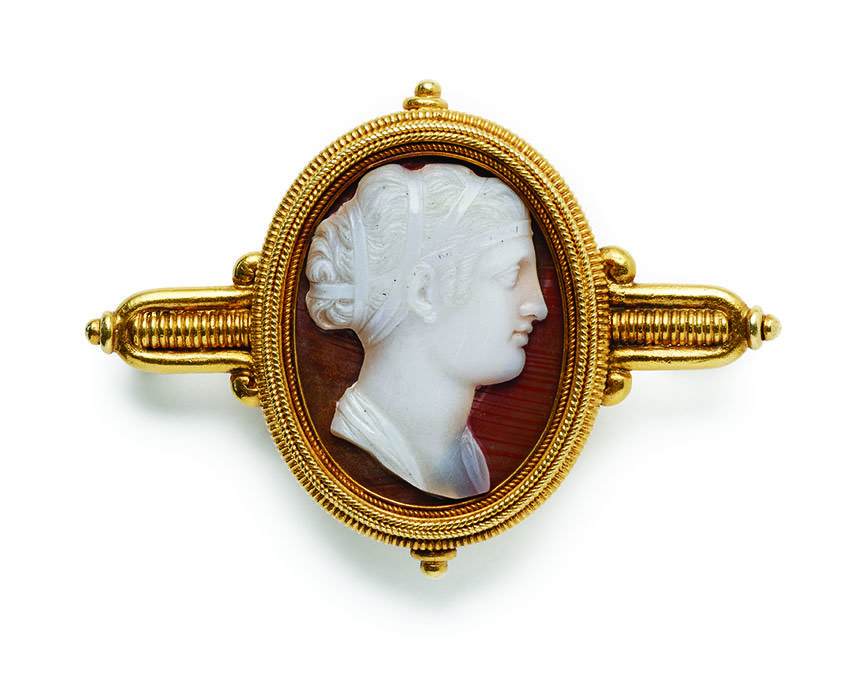 carved in a rust coloured and white sardonyx, a right facing profile of the Mytilene poet Sappho, her hair bound in ribbons.

Mounted in a yellow gold brooch by Roman jeweller Castellani, circa 1875, comprising of a multi-layered twisted wirework border, with two reeded armatures flanking the gem with beading and scrolls. Signed to the reverse.

The signature ‘MASTINI’ has been attributed to the studio of the Amastini family and has been suggested to be the signature of Niccolò Amastini, who created it to differentiate his work from that of his father, Angelo Amastini (1754-c.1816). There are also precedents for cameos signed ‘A MASTINI’ (including a cameo of Dionysus mounted by Castellani), which have been attributed to Angelo. Castellani had an important role in the patronising and collecting of engraved gems during the 19th century, commissioning stones for their jewels from engravers working across Italy at the time. Castellani also acquired large numbers of ancient and Renaissance gems, as well as intaglios and cameos carved by notable engravers who had been active during the 18th and early 19th Centuries.

Castellani’s surviving inventory mentions the purchase of severals works by Amastini, including portraits of the goddess Flora (one listed in 1865), as well as a cameo of Arethusa listed in 1904-5. The name Mastini also appears in the register and is credited with the carving of gems of a stork, snake and a portrait of Emperor Napoleon Bonaparte. Among the other carvers whose work was acquired and mounted by Castellani are Giovanni Girometti (1780-1851), Benedetto Pistrucci (1784-1855), Antonio Berini (1770-1861), Giuseppe Cerbara (1770-1856), Giovani Antonio Santarelli (1758-1826), Giovanni Pichler (1734-1791).