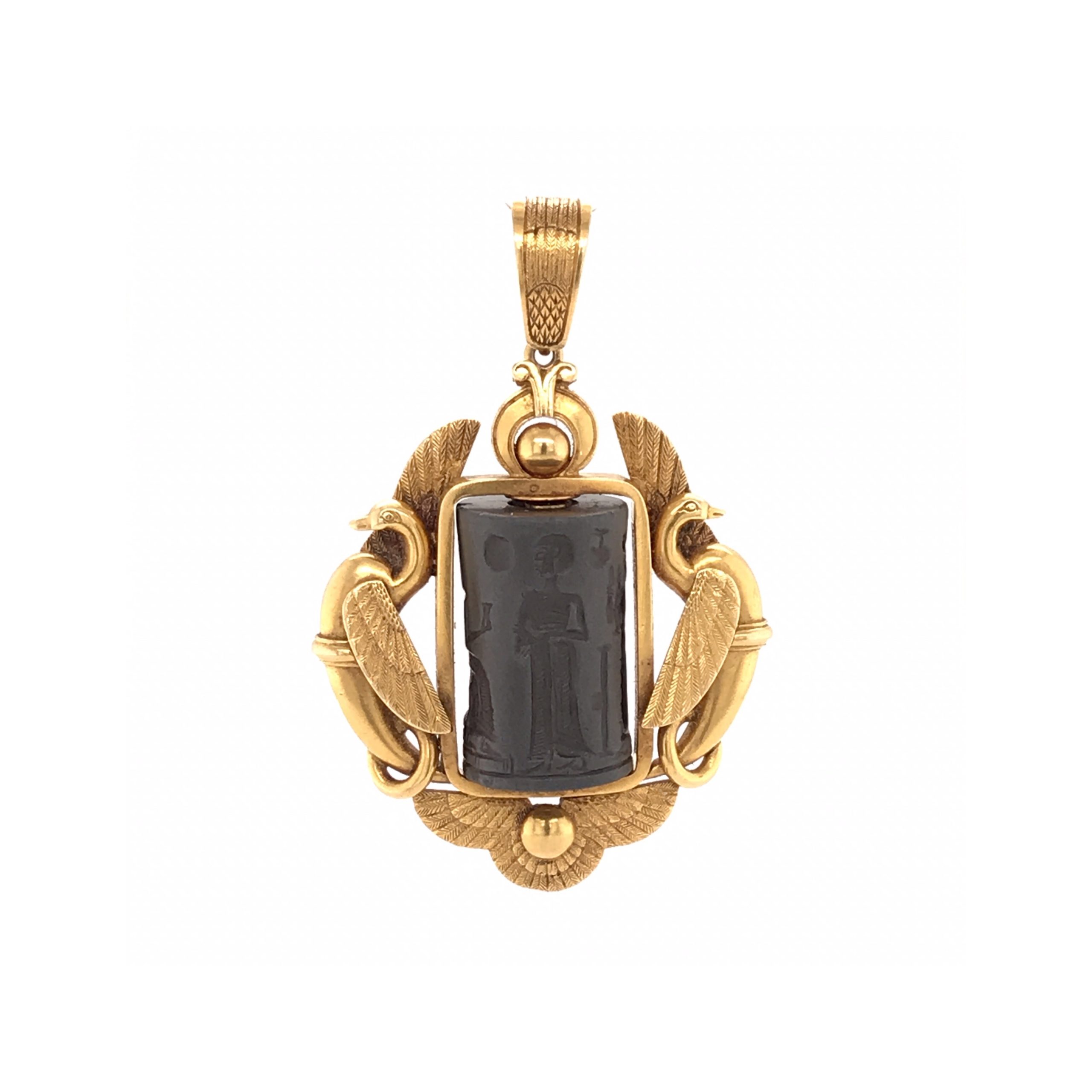 comprising of an ancient cylindrical seal mounted on a gold wire so it can be rotated, flanked either side by stylised geese with their wings outstretched, the wings of the goddess Isis in chased yellow gold beneath, topped with a haloed gold ball, the loop chased with a feathered design. 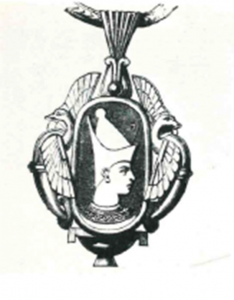 The firm of T & J Bragg was founded in Birmingham by Thomas Perry Bragg during the early nineteenth century. In 1844, it was taken over by his sons Thomas and John. The company exhibited their work at numerous International Exhibitions, including those of 1862, 1867 and 1872. In the exhibition of 1872, they displayed a series of pieces in the ancient Egyptian style. An engraving of a near identical pendant, centred with a portrait of a pharaoh, records one of the exhibits shown in this year (reproduced on page 156 of European and American Jewellery 1830-1914 by Charlotte Gere).

The Babylonian cylindrical seal mounted to the centre of the pendant is carved from haematite and dates to circa 2000 BCE.

The extraordinary discoveries made by Sir Austen Henry Layard during his excavations of Nimrud and Nineveh during the 1840s and 1850s sparked intense interest during the 19th Century in ancient Mesopotamia. The Assyrian Palace reliefs were published as engravings by Layard, enabling artists across the world to see these exceptional works of art for themselves.

Jewellers such as Phillips Brothers & Sons, John Brogden and Tiffany in New York crafted jewels which took motifs from Assyrian carvings, in some case exactly copying the scenes depicted on the Assyrian Palace reliefs and miniaturising them in gold on a brooch or pendant.

Perhaps the most famous jewels created in this style during the 19th Century is the suite by Phillips Brothers & Sons for Sir Austen Layard, incorporating a collection of Mesopotamian hardstone cylindrical seals he had collected during his excavations. The suite was given to his wife Enid as a wedding gift in 1852 and can now be found in the British Museum (Museum No.: 115656).

The conflation of the ancient Egyptian style with a seal from ancient Mesopotamia is a peculiarity of the 19th Century, as elements and motifs were taken from a myriad of different sources across the ancient world and used as part of the ‘revivalist style.’