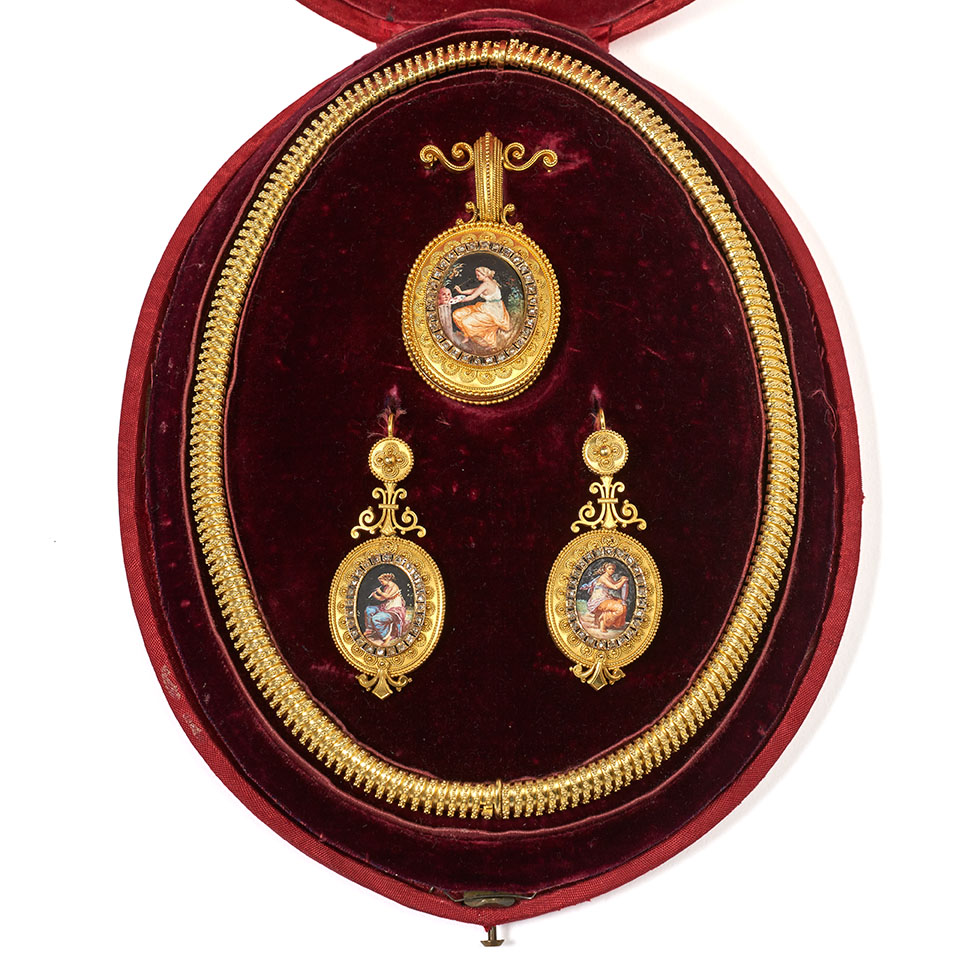 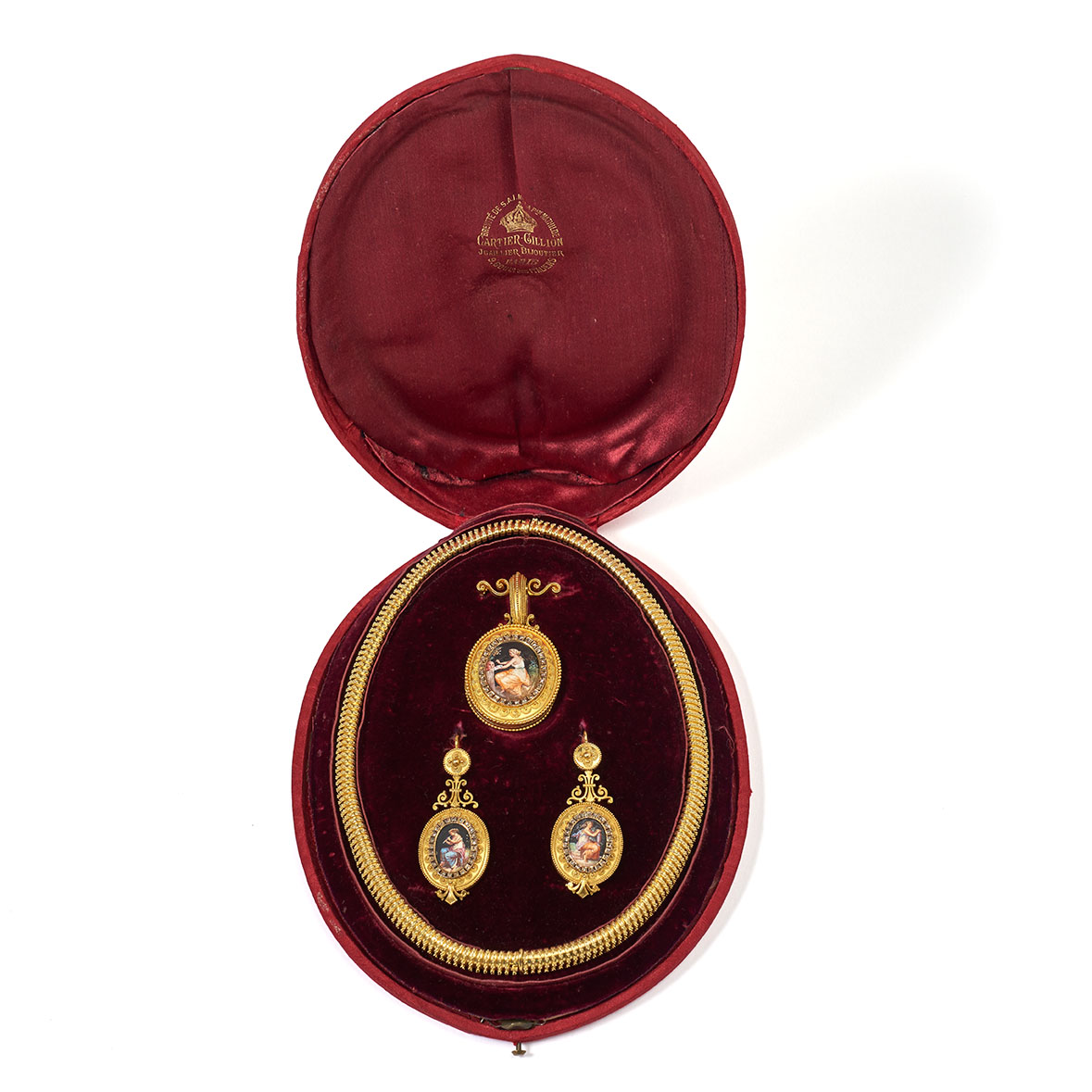 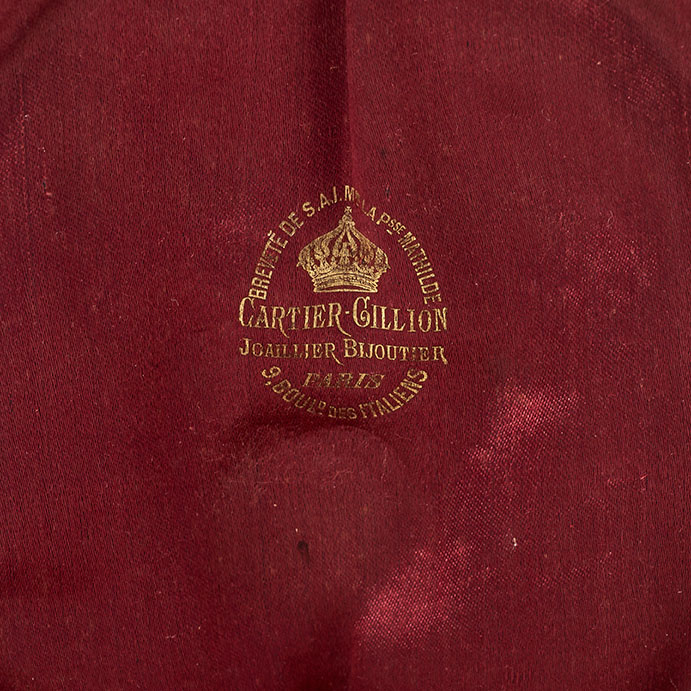 The Cartiers: The Untold story of the family behind the Jewellery Empire, Cartier-Brickell, Francesca, (New York, 2019), page 16.

consisting of a pendant locket and earrings en suite each centred with an oval painted enamelled panel by Eugène Richet representing a female figure shown to be devoted to the arts, that in the locket seated holding a palette of colours in one hand and a brush in the other, adorning a carved head poised on a plinth and consistent with the Classical tradition of painting sculpture as well as architectural elements, that in one of the earrings holding a vase of terracotta representing the art of ceramics, the other playing a pipe and symbolic of music, each panel bordered with diamonds within a gold frame applied with twisted wirework circular forms centered with a bead, the earrings further suspended from stylised volutes and a circular disc applied with similar motifs. A pin fitting allows the locket to be worn as a brooch as well as suspended from a chain. The chain itself is probably the work of Cartier-Gillion, who made the fitted case to accommodate it, since its tubular articulation is inconsistent with Fontenay’s work.

The scenes represented in Richet’s enamels are inspired by wall paintings found in the recently excavated archaeological sites of Pompei and Herculaneum, the background colours invariably black or pastel blue and echoing the palette of the wall paintings, the use of painted opaque enamel further echoing the matt texture of the originals.

Although he participated in Expositions Universelle, Eugène Fontenay is not known to have occupied retail premises and his pieces are found in fitted cases by other distinguished firms.

This is the first instance of a demi-parure by Fontenay to be found in a Cartier-Gillion case.

Louis Francois Cartier, founder of the business first established in 1847 at 29 rue Montorgueil (having worked there for Adolphe Picard who consigned the business to him), moved the firm to 5 rue Neuve des Petits Champs in 1855 with Picard’s assistance, being contractually bound to  him.  He took over the lease of the jeweller Picard at 9 boulevard des Italiens in 1859 and bought the existing stock. Alfred Cartier would succeed his father in 1874, having been his partner for 2 years.

Fontenay had been supplying Louis François Cartier  as early as 1850 with jewellery already inspired by anquitity with its decorative meanderings and palmettes, however the exhibition of the Campana collection acquired by Napoleon III and displayed in the Louvre in 1861 proved a revelation to him.

Jewellery by Fontenay has been identified in the original fitted cases of other firmssuch as Tiffany and Co. and Boucheron, a necklace decorated with such enamelled plaques by Richet in an original Boucheron case being preserved in the British Museum collection of jewellery.