A Gold Fringe Necklace in the Archaeological Taste by Eugène Fontenay 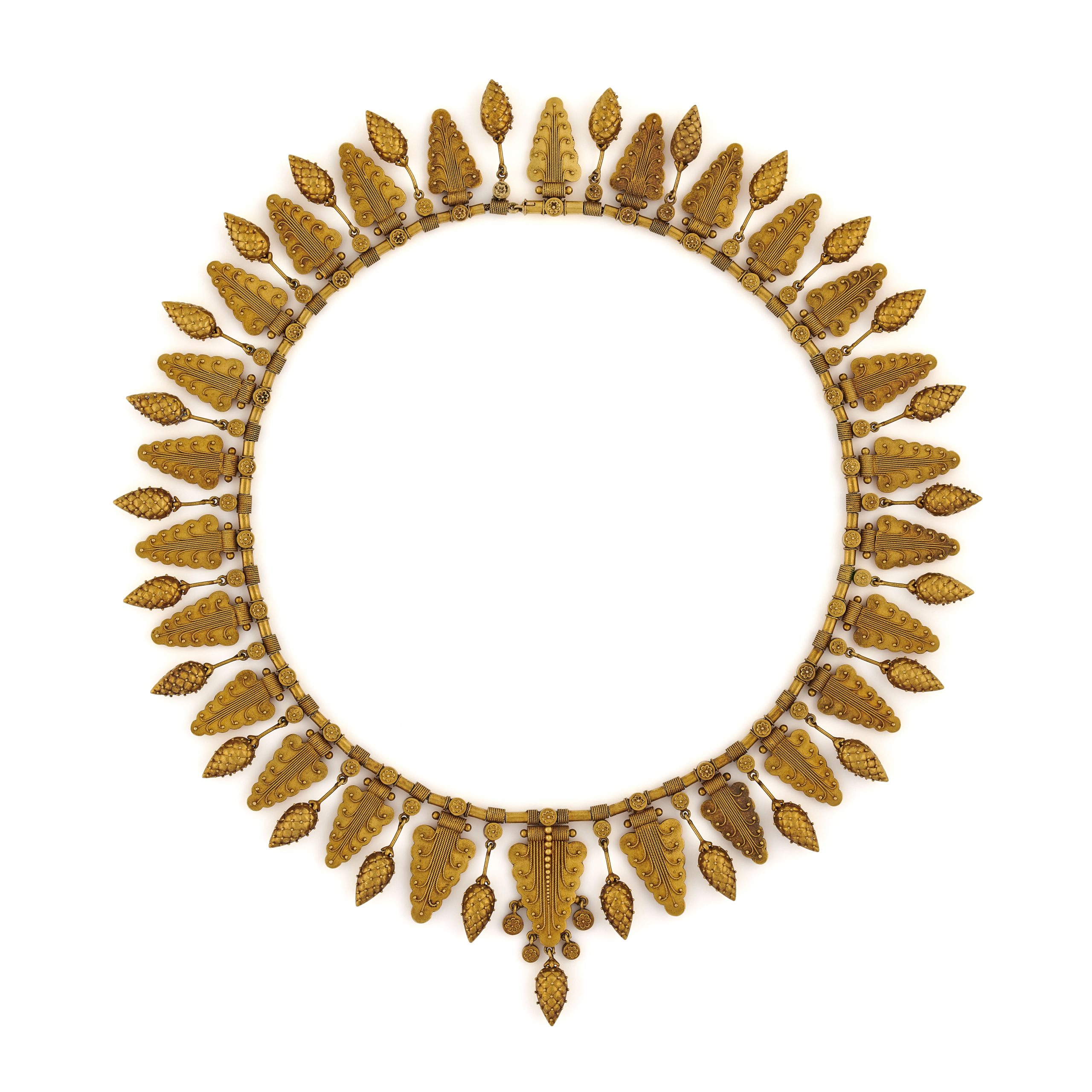 composed of a row of suspended graduated elements consisting of palmettes applied with vertical and expanding twisted wirework motifs alternating with stylised pine cones, each ornament surmounted with a circular disc decorated with a rosette, the centre palmette suspended with a pine cone flanked by two pairs of similarly decorated discs.

An identical necklace by Fontenay formed part of the exhibition ‘Castellani and Italian Archaeological Jewelry’ (no.279) held at The Bard Graduate Center for Studies in the Decorative Arts, Design and Culture, New York, the National Etruscan Museum of Villa Giulia, Rome, and the Gilbert Collection, Somerset House, London, November 2004-October 2005. It was illustrated in the accompanying catalogue by Susan Weber Soros and Stephanie Walker, Fig.12-7, p.320.

Eugène Fontenay (1823-1887), son of goldsmith Prosper Fontenay, revealed an early talent for drawing and honed his technical skills during his apprenticeship with Marchand aîné and his employment with the jeweller Dutreih.

He established his own workshop at 2 rue Favart  in 1847, applying his dexterity as a draftsman to the creation of inventive and elegant jewellery designs. His technical abilities were no less formidable, the jewellery historian Henri Vever recording an instance when Fontenay entirely remade a piece that had been carried out by one of his craftsmen that had not met Fontenay’s exacting standards, and he did so overnight so that it could be delivered in time.

His prodigious talent was revealed to the public in a sumptuous jewel he exhibited at the Paris Exposition Universelle of 1855, consisting of an extraordinary tiara of wild brambles in which platinum had been introduced to create the intricate flowers and sprays flowing from its contours. His success culminated in the execution of a tiara for the Empress Eugénie in 1858 which bore nine large fleurons enhanced with emerald or sapphires, from which seventeen large pearls or diamonds could be suspended, entirely changing the aspect of the jewel.

However, it is for his jewellery in the Classical taste that Fontenay achieved his lasting renown. The extensive collection of archaeological works of art formed by the Marquis of Campana, acquired by Napoleon III and subsequently exhibited at the Palais de l’Industrie in 1862, would profoundly inspire him during the last two decades of his career. Consisting of some 10,000 pieces, amongst them were 1,200 examples of ancient jewellery.

First created in 1864, Fontenay’s jewels in the Archaeological taste were publicly exhibited at the Exposition Universelle in 1867. Having first participated in an international Fair under his own name in Porto in 1865, this was the first time he was doing so in Paris, winning a gold medal for his display.

Henri Vever in his French Jewelry of the 19th Century, described Fontenay as “a man of distinction and rare intelligence, of great discernment and impeccable taste. A true artist and a distinguished writer, he handled a pen as skilfully as a paint brush.”(Translated edition by Katherine Purcell, p.642). “Fontenay was one of the most distinguished figures in the history of jewellery; like Castellani, his name became associated with his particular style and no one has managed to reproduce it since” (Vever, op.cit., p.628).