A Gold and Gem-set Brooch by Paul Flato 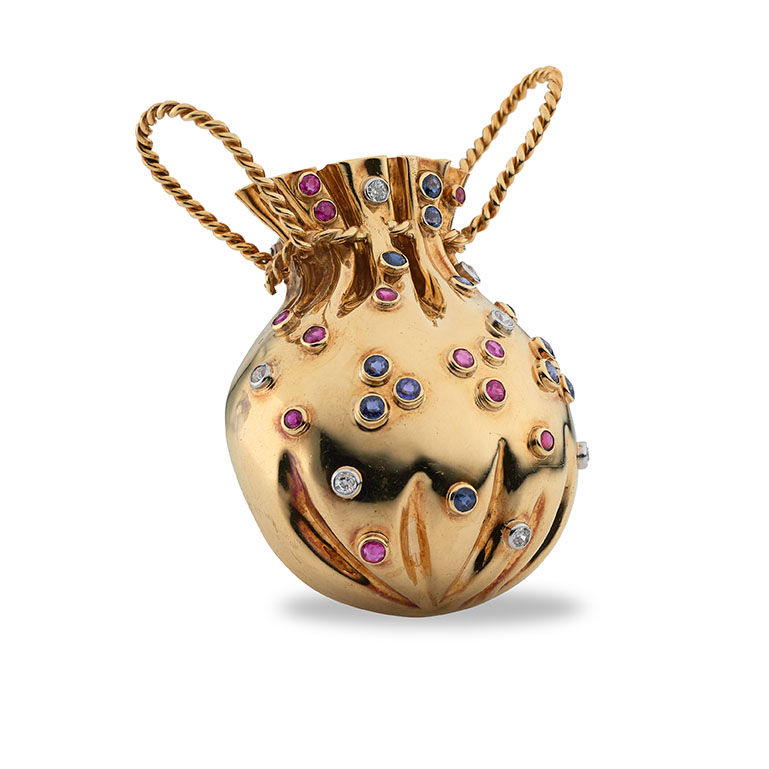 in the form of a money bag in yellow gold, the creases in the fabric faithfully recreated, tied with twisted wirework strings, the surface studded with brilliant cut diamonds, rubies and sapphires in rub over settings.

Paul Flato was born in Texas in 1900, the son of a wealthy family of German descent. He moved to New York in 1920, becoming an apprentice to a jeweller on Fifth Avenue. After a couple of years, he established his own business.

Flato built a friendship with Harry Winston early on in his career. He set many Winston diamonds and helped him to sell some legendary stones, including the 125.65ct Jonker Diamond, which he mounted in a necklace. He was also known as a specialist in saltwater pearls, assembling exceptional strands which sold for hundreds of thousands of dollars at the time.

Flato cultivated a reputation for ingenious and often whimsical designs, executed by the finest craftsmen. Among the designers he employed was Fulco di Verdura.

In 1938, Flato opened a shop on Sunset Boulevard, at the height of the Golden Age of Hollywood. Many legendary screen actresses became customers or wore his creations in film, such as Marlene Dietrich, Ginger Rogers, Greta Garbo, Katharine Hepburn and Rita Hayworth.

In later life, he opened a shop in Mexico City, where he remained until the 1990s. He eventually returned to Texas and spent his final years with his family. He died in 1999.

Around 1945, Flato created a series of jewels which were studded with rubies, sapphires and diamonds. They are thought to represent the colours of the American flag – a patriotic gesture to mark the end of the Second World War and the victory of the allies.