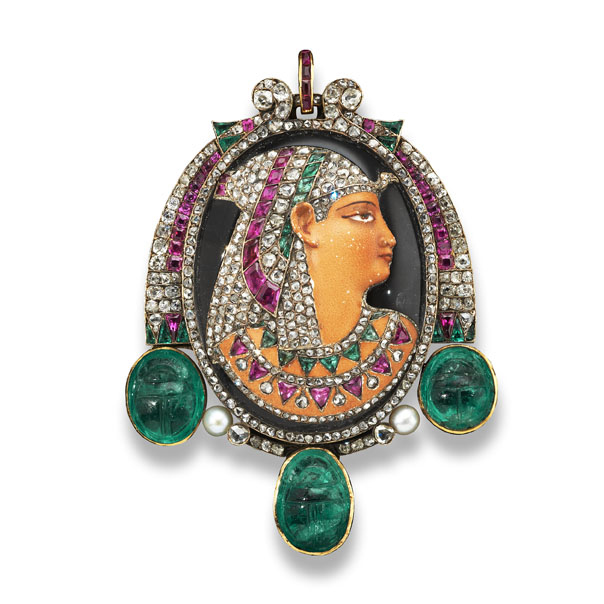 Centred with an oval rock crystal panel applied with an enamelled profile portrait of the Egyptian
goddess Isis, her head-dress and twin necklaces lavishly set with diamonds, rubies and emeralds,
the border similarly decorated and set with three carved emerald scarabs. The intricately pierced
gold gallery is surmounted with a ruby set loop, allowing the jewel to be worn as a pendant.

Gustave Baugrand (1826-1870) formed a partnership with Paul Marret in 1852 and continued to run the firm with his widow from 1853 onwards, taking it over in 1864.  Marret et Baugrand’s reputation for fine gem-set jewellery earned them their first commission for a diamond-set comb from the Empress Eugénie, and Baugrand continued to supply the Imperial court with his sophisticated and inventive pieces.

French interest in Egypt, already stirred by the Napoleonic campaigns of 1798, was renewed by the excavations conducted by Auguste Mariette in the early1860’s which resulted in several hundreds of crates of Egyptian artifacts arriving at the Louvre, and by the construction of the Suez Canal during the same decade. Lotus flower and pharaonic motifs were much in evidence in the jewellery displayed at the 1867 Exposiition Universelle, and Baugrand’s stand was dominated by a tall statue of Isis. A number of pieces in the Egyptian taste were featured in his display including a similar brooch to this example, surmounted and suspended with a pearl, illustrated in Henri Vever, La Bijouterie Française au XIX e Siècle, Vol. II p. 276 (Translated edition p. 740). Baugrand, whose remarkable contribution to the Exposition Universelle earned him the Légion d’Honneur, died at the untimely age of 44 during the Paris siege. He was acknowledged by Henri Vever as ‘the Boucheron of his time’.

‘French Jewellery of the Nineteenth Century’,
Wartski, June 2001, no. 147,
illustrated in the catalogue.