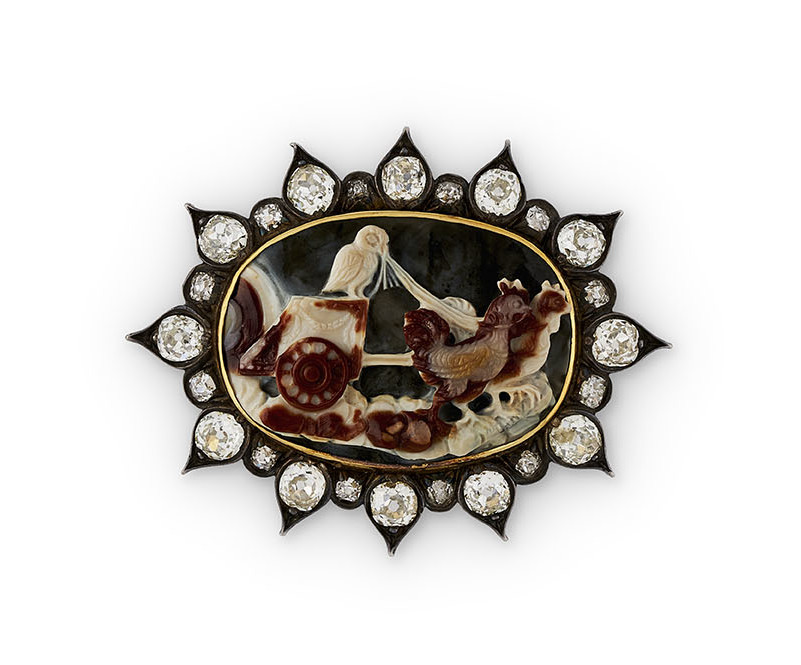 the ornately figured and coloured oval agate scene, depicting an owl driving a chariot being pulled by two cockerels.

The scene is an allegory of the triumph of virtuous love over carnal love. The owl symbolises wisdom, whilst cockerels are considered to represent virility and sexual potency. Whilst the cockerels are pulling the chariot forward, it is the wise owl who determines its direction. It is also possible that the gem could be an allegory of light and dark, day and night and life and death. Cockerels have long been associated with the break of day when they crow and, therefore by extension, represent life. The owl by contrast is a symbol of the night time and death (as is so eloquently illustrated in the 17th Century painting Vanité à la chouette in The Musée des Beaux-Arts de Dijon, which depicts an owl sitting on a human skull next to an extinguished candle).

The scene may therefore be a rebus for carpe diem, the knowledge of death should drive us in life. The image of a chariot being pulled by cockerels dates back to antiquity and can be seen in ancient engraved gems, as well as larger decorative ornaments (such as the terracotta figure in the British Museum, (acquisition no. 1856,1001.60). These depictions traditionally show Cupid driving the chariot, with some variations showing a mouse as the driver. As the mouse also had nocturnal associations, it is possible the scene had a similar meaning to the ancient Romans.