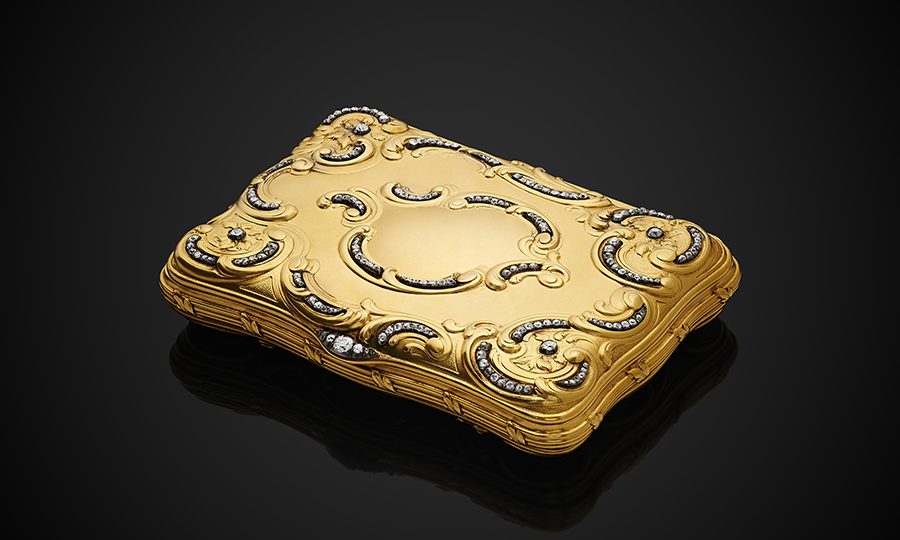 The study of hallmarks is a niche subject that attracts a certain type of person. Classifying the marks and deciphering the connections between them appeals to the ordered mind. Hallmarks are governed by regulations, they are methodical, reassuringly certain and cannot be quibbled with. When a new hallmark is found, the desire to identify and assimilate it into the existing system is therefore strong.

The Fabergé gold case pictured above was the source of great excitement when brought to Wartski for examination as it bears a previously unrecorded mark.

It is made from richly coloured matt yellow gold and modelled in the eighteenth century rococo taste, its repoussé waves accentuated on the lid with crashing diamond set peaks. The corners are mounted with old brilliant cut diamond centred flowers and the thumbpiece set with tapering diamonds.

Its evident appeal was recognised by one of the twentieth century’s most prolific Fabergé collectors, King Farouk of Egypt. It was part of his extensive collection and among the pieces seized by Nasser’s Republican government and subsequently sold in March 1954 in Cairo. His Majesty King Farouk I of Egypt The case is stamped with an array of marks. Fabergé’s last chief Workmaster Henrik Wigström oversaw its production and it bears his maker’s mark. It is further stamped with a gold standard of seventy-two zolotniks equating to eighteen carat gold, the highest purity used by Fabergé’s workshops, it has a kokoshnik date mark for 1908-1917 and is scratched with Fabergé’s inventory number 20364, which indicates it was made in the summer of 1910.

The Russian hallmarks inside the case

In addition to the Russian stamps it also has hallmarks applied by the Goldsmiths’ Company’s London Assay office. In 1903 Fabergé opened its branch in London, the only one outside of Russia. The wares sold in England were sent from Russia via the registered post and arrived without incident until 1908, when British customs intercepted a parcel destined for the branch. The suspicious customs agents forwarded its contents to the Goldsmiths’ Company who were, and still are, responsible for maintaining the standards of precious metals sold in Britain. The Company found that the pieces inside did not bear the import marks required by English law and decreed Fabergé’s works must be stamped with them. Fabergé opposed this, believing the materials he used were merely those of an artist and that their intrinsic value and thus the need to mark them was irrelevant. Mark Romer, his British lawyer, compared valuing Fabergé’s creations based on their constituent materials to viewing the contents of the National Gallery as merely a ‘collection of canvas’. In November 1910, Fabergé contested the order in the High Court of Justice. Despite considerable time and expense spent preparing their arguments, Fabergé lost in Court and was required to add British hallmarks to pieces destined to be sold in London. The case was sent to England and following the trial stamped with English import marks for 1910-1911 and Fabergé’s British hallmark ‘C F’, representing his initials. Beside the English hallmarks are two further French import marks, suggesting the case was taken by the London branch on one of its regular sales trips to France. The English hallmarks and French import marks (to the right).

However, there was still one mark on the inside lip of the case which remained a mystery, it is shown in the picture below. The mark is a combination of Cyrillic and Latin characters reading ‘LФB’ in an oval shield. Its presence on the case was baffling. All the other marks were known and previously recorded but this one was not. Why was it there and what did it mean? Was it contemporary or later, official or unofficial? A search of English, Russian and continental European hallmark dictionaries provided no clues to its identity. A small fissure had opened in the ordered universe of hallmarking.

The use of Latin and Cyrillic letters hinted the mark may relate to Fabergé’s London branch. A study of the papers of Henry Bainbridge, the firm’s London agent, now kept in the Fabergé Museum in St. Petersburg, finally identified the curious mark. Bainbridge kept detailed records of the firm’s activities. In the run up to the Goldsmiths’ trial and preparing for the worst he contemplated what hallmark the firm should use in London if they lost. During his annual trip to St Petersburg he raised the subject and in his daybook he drew four possible designs under the heading ‘London Stamp’. Three of them are crossed through but one remains in the top right hand corner. It reads ‘LФB’, referring to ‘London Fabergé Branch’ and is the mark Fabergé proposed using on pieces destined for sale in London. The gold case reveals the punch for this mark was made and used at least once, before it was superseded by the ‘C F’ mark imposed on the firm by the Goldsmiths’ Company on 7th March 1911.